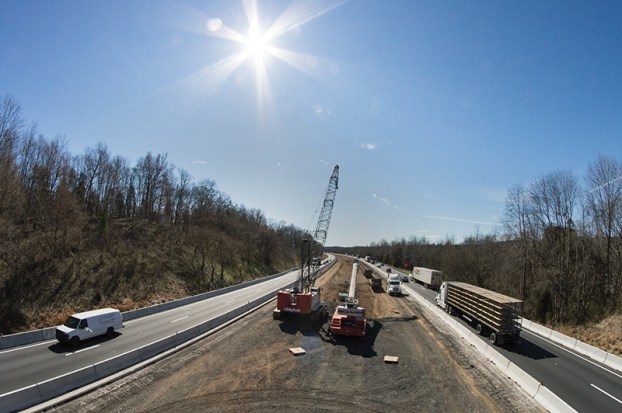 Josh Bergeron / Salisbury Post - Trucks and cars drive down a segment of I-85 in Rowan County that's under construction as part of a widening project. From Kannapolis to China Grove, I-85 will be widened from two lanes on each side to four lanes on each side.

I-85 construction underway, will last more than 2 years

SALISBURY — Department of Transportation engineer Kelly Seitz has a few words of wisdom for motorists navigating Interstate 85 and surrounding roads over the next two years.

He said using those bits of advice will be helpful as construction related to I-85’s widening from two to four lanes continues.

Widening work in Rowan County will stretch from Kannapolis to China Grove and involve other roads, too. The latest estimates project completion of all construction work in November 2019.

A number of bridges will also be replaced or removed between now and the end of I-85 construction. Currently, the Daugherty Road and Lentz Road bridges are closed. Both closures will last several months — Daugherty Road until August and Lentz Road until September. After that, Pine Ridge Road’s bridge over I-85 will close for repair and replacement, Seitz said.

On I-85, construction crews currently are working in the median between the northbound and southbound lanes of I-85. Crews have set up a staging area on U.S. 29.

Seitz said crews will build new road lanes in the median, shift traffic to the interior lanes and, then, work on exterior lanes.

Construction work associated with the widening could result in longer-than-usual delays on I-85, Seitz said. Already, stalled traffic is a common occurrence on I-85 in southern Rowan County.

Currently there’s a multiple-mile stretch of I-85 in Rowan County that’s two lanes in both directions. I-85 grows to four lanes in both directions just north of China Grove. Once widening work is complete, southern Rowan will have two, full interstate exits — one at N.C. 152 and one at a relocated Old Beatty Ford Road — and four lanes on both sides of I-85 through the entire county.

The existing Old Beatty Ford Road is set to be split in two after construction crews demolish the existing bridge. A new name will be picked for each of the two sections of road.