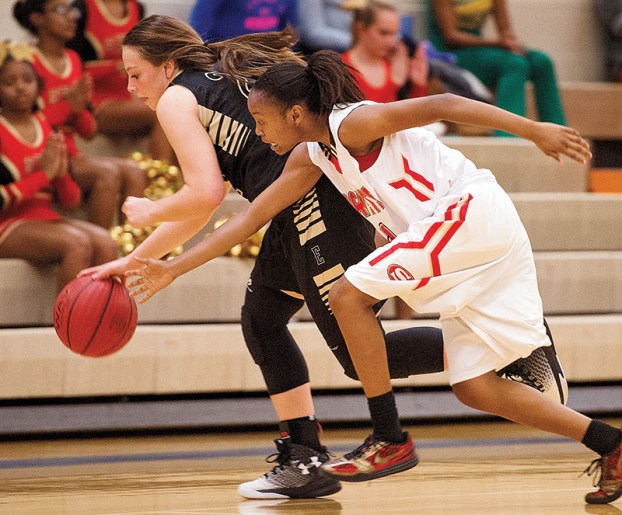 LEXINGTON — Despite a remarkable rally in the second half, the Salisbury girls could not hold it together in the final minute Friday night and lost the Central Carolina Conference title game to East Davidson, 63-58.

Salisbury rallied from a 15-point hole in the contest at Lexington Senior High with a 28-point third quarter and caught the Eagles at 45-45 as the final period began. From there, the two teams battled through seven lead changes and four ties to reach the final minute, tied at 58-58.

A critical turning point came with 50 seconds left when a Hornet shot was blocked out of bounds but was awarded to East Davidson. Megan Hamilton then drove for a layup with 28 seconds left to give the Eagles the lead for good at 60-58.

East Davidson (19-6) then came up with key steals by Brooke Anders and Bailey Grimsley in the final 20 seconds, hitting three of four free throws in the process, to hold off the regular season champion Hornets (20-2), snapping Salisbury’s 20-game win streak in the process.

“We were up by two with the lead but we took an early shot that led to an easy basket by them,” Hornet coach Lakai Brice said. “We talked a lot about shot selection in that situation but didn’t execute. That was the real turning point.”

The Hornets suffered through a miserable first half due to poor shooting and numerous turnovers, trailing 29-15 at the half. East Davidson kept the pressure on in the third period thanks to a pair of three pointers by Anders (28 points) to put the lead at 40-25. Then Salisbury flipped the switch as sophomore Bryanna Troutman and senior Tyzarea Alexander went on a scoring binge to cut the lead to 45-43 at the end of the third quarter.

Troutman had a monster game with 24 points and 25 rebounds while Alexander scored all 12 of her points in the third quarter as the Hornets went ahead for the first time at 46-45 early in the final period. That set the stage for the nip-and-tuck finish that ultimately went East Davidson’s way.

“We just tried hard to get back in the game and we did,” said Alexander, one of only two seniors on the talented Hornet team. “But it didn’t work out. We just have to come back stronger than we did tonight, learn from our mistakes and push through.”

Troutman, meanwhile was solemn after the game despite her amazing double-double. “I don’t really keep up with that” she said of her stats, “But if we work hard (in the state play-offs), and put our all into it, we can keep going.”

Veteran East Davidson coach Don Corry noted that he warned his team that Salisbury was going to make a big run in the second half and they did. “I said they are a really good team and are not 20-1 for nothing. We got a little rattled in the third quarter but we settled down then Brooke Anders did a great job and kind of took over the game at the end.”

Anders hit four of her team’s six three pointers and notched 12 points in the decisive fourth quarter to keep the Eagles in a position to pull out the win. Grimsley added 16 and Hamilton chipped in nine. Following Troutman’s 24 was freshman Anayia Fulson with 13 including a buzzer-beater three pointer at the end of the third period.

East Davidson, a three-time defending CCC champion and last year’s State 2A runner-up, will enter the playoffs Tuesday as a second seed and obviously on a high from their tournament win.