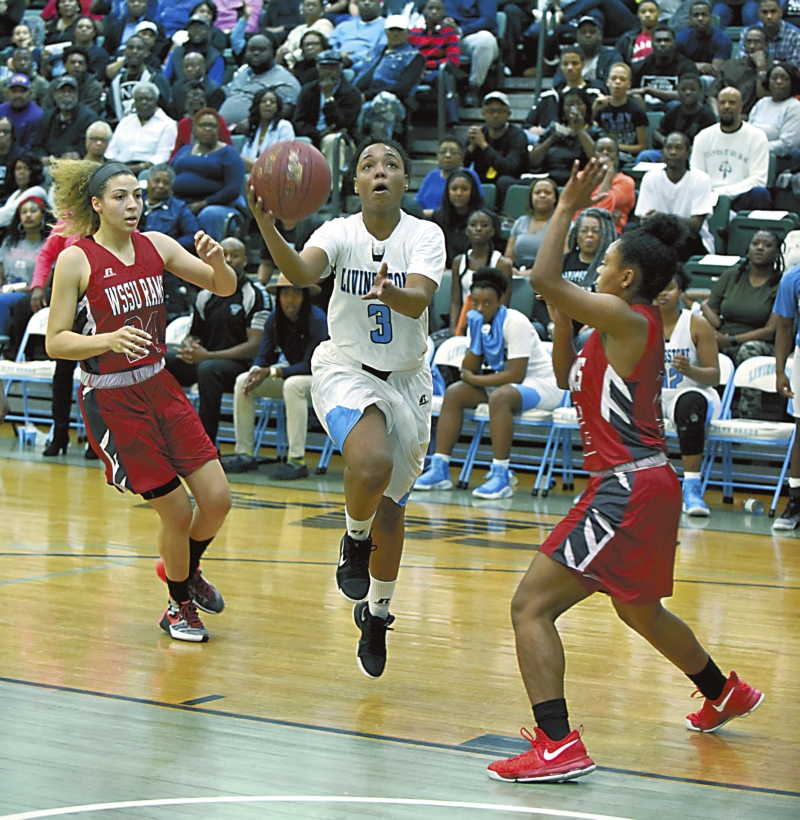 Wayne Hinshaw/for the Salisbury Post ... Livingstone’s Deonna Young, right, drives toward the basket for two of her game-high 35 points against Winston-Salem State on Saturday afternoon. At left is the Rams’ Briana Arnold. Livingstone won, 92-79.

SALISBURY — Talk about saving the best for last.

The win was a huge one for the Blue Bears (14-12, 9-7 CIAA), as it gives them a Southern Division second-place seeding in next week’s conference tournament. Winston-Salem St. (13-13 overall) is also 9-7 in the CIAA, but Livingstone has the tie-breaker.

Livingstone also won the earlier meeting with the Rams, 75-71, in double overtime, on Jan. 28 in Winston-Salem.

WSSU’s Trei Torain started the game yesterday with a 3-pointer and that was the visitors’ only lead all day.

Senior guard Brittany Taylor, playing her last game at home, set the tone by drilling three 3-pointers in the first quarter and junior guard Zena Lovette also scored nine points in the period, which ended in favor of the Blue Bears, 26-16.

“Go big or go home,” said Taylor. “This is my last time and you don’t get to do it again, so go out strong, go out with a bang.”

Taylor cooled off a little in the second period but that’s when sharpshooter Deonna Young, a junior guard, began her offensive explosion.

Young, who had a career-high 35 points, went by her 11.7 scoring average before halftime with 13 second-quarter points. For the game, Young bombed in seven 3-pointers and 8-of-10 free throws. She was 3-for-7 on other field goals.

“I was feeling it, I was, but this was for our seniors” said Young. “They will never get to play on this court again, so we were playing for Brittany and Bria (Patterson). And we delivered … it feels great.”

Young, who is from Winston-Salem and played at Glenn High School, acknowledged that playing against hometown WSSU was also motivation.

“Oh yes, absolutely,” said Young. “When we played them over there, I was rushing my shots (11 points), but today, I just let the game come to me.”

The Blue Bears then outscored WSSU, 7-2, to end the third quarter, including a crowd-erupting, deep 3-ball from Young at the buzzer. Young then leaped into assistant coach Ashley Sammons’ arms as she came off the court.

“I thought, ‘you know what D?’ Just put it up,'” Young said of the quarter-ending buzzer beater. “I felt good shooting the ball all day.”

But the game wasn’t over. There were 10 more exciting minutes to be played.

And just two minutes into the final stanza, the Rams cut the margin to 71-65, on the strength of Kandace Tate’s layup and Jasmine Carter’s 3-pointer.

So just when everyone was bracing for a nip-and-tuck, nail-biter to the end, Livingstone stepped on the gas again — with an 18-2 run to seal the deal.

Two layups from Asia Green started the good times for the Blue Bears and Young hit one of her 3-pointers for a 78-65 lead.

After a WSSU timeout at the 6:14-mark, Lovette had a steal and easy layup. Young had six points in the next minute and-a-half and suddenly, it was 21-point game at 88-67, with 4:37 remaining. Taylor Boyd’s layup with three minutes left, finally broke the spell for the Rams.

WSSU whittled down the deficit during the final minute.

“We knew that they were going to make their runs, that’s what the game is about,” said Livingstone coach Tiffany Silver. “But our late run was really big.

“The energy, from the beginning, was there,” continued Silver. “That came from the last two days of practice, a great shoot-around this morning and everybody buying into the fact that we needed everybody to step it up. We were playing for the seniors and a No. 2 spot in the division today and that helped us stay focused.”

Livingstone, despite having just eight players, wants to control the tempo and run whenever possible. Mission accomplished by scoring 28 points off 20 WSSU turnovers. And the Rams shot just 38 percent from the floor, also leading to some fast-break buckets.

“We knew we needed to get some stops and not let them trade baskets with us,” added Taylor. “We needed to capitalize on stops and turnovers and score ourselves. We controlled the tempo and got that done. Most teams can’t keep up with our transition game. Our opponent today has good ‘bigs’ but they struggle to run with us.”

The Rams have six players at least six feet tall, while Livingstone is more of a guard-oriented squad.

“Our slogan has been, ‘we all we got, we all we have,'” said Silver. “And that’s how we’ve played. They totally bought into playing for one another.”

Since some deletions on the roster at Christmas break left the eight players, Livingstone is 11-5.

Taylor followed Young’s big game with one of her own, just needing one assist for a triple-double. Taylor scored 17 points, grabbed 10 rebounds and dished out nine assists.

Carter connected on four 3-pointers for WSSU and led the Rams with 18 points. Tiana Edwards followed with 15.

The CIAA Tournament begins in Charlotte on Tuesday, but due to its win yesterday, Livingstone gets a first-round bye and will play on Wednesday.

“We try to focus on us, more than the other team,” concluded Silver. “Control what we can control. The bye definitely helps us, since we do have eight players, not to have to play on back-to-back nights.”