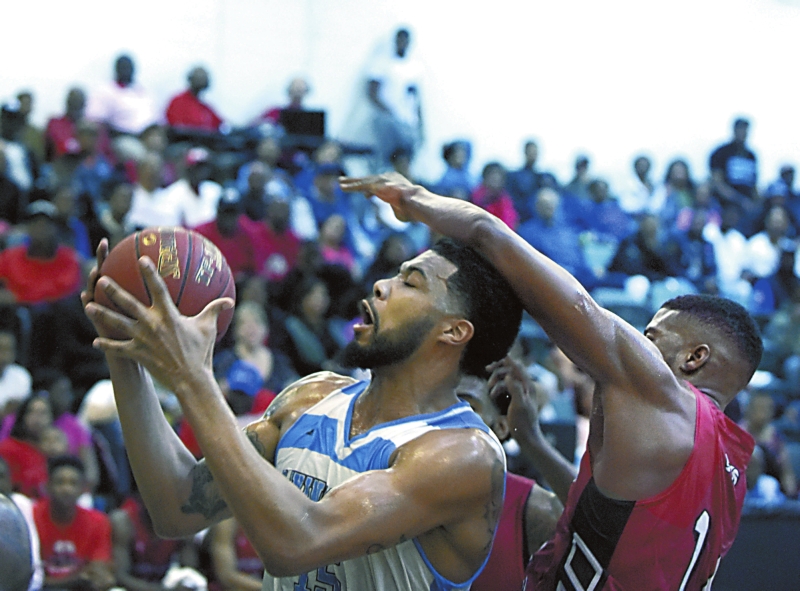 Wayne Hinshaw/for the Salisbury Post ... Livingstone’s David Duncan, left, gets fouled by Winston-Salem State’s Jamel McAllister, while underneath the basket, during yesterday’s game at New Trent Gym. The Rams won the game, 78-74.

Which, as it turns out, is just where the Blue Bears hoped to finish in the CIAA’s Southern Division. A 78-74 loss in the regular-season finale left both teams tied for second with 6-4 division records. But because LC prevailed by five points in overtime when the teams met on Jan. 28 and the Rams won by four last night, Livingstone gets a No. 2 seed in this week’s conference tournament.

“Our whole goal was to win tonight,” said forward Jimmy Wilson, one of four Livingstone seniors recognized before the game. “It wasn’t our plan to lose by four. But in the closing minutes everyone realized we’ve got to do what we’ve got to do. The goal became get within four and get that second seed.”

And with it, the Blue Bears (10-16, 7-9 CIAA) receive a pass straight to Thursday’s quarterfinal round at Charlotte’s Spectrum Center, bypassing a couple of trap-door play-in rounds.

“That’s pretty important,” coach James Stinson said. “For a team that was picked last (in the league’s pre-season poll), a second seed is really good.”

It took an energetic finish to land there. WSSU (14-13, 8-8) owned a 77-68 lead after junior guard Xavier Mills scored his only basket on a fast-break layup with 26 seconds remaining.

“That’s when we started getting into a flow and executing and getting the shots we wanted,” said Stinson. “That’s the type of team we are. When we can execute and take care of the basketball, we all feel much better.”

LC outscored the Rams 6-1 the rest of the way. First came an authoritative drive to the basket by 6-foot-7 forward Emarri Bailey, a layup that trimmed the deficit to 77-70 with 17 seconds to go. When Winston-Salem’s inbound pass was deflected, then stolen by Wilson, Bailey found himself in the right place for an easy basket with 12.9 seconds remaining.

“Crazy, huh?” said WSSU coach James Wilhemi. “It was like one of those so-called meaningless plays that change everything in Vegas.”

Livingstone had one more of them up its sleeve. After Winston-Salem’s Carlos Rankins hit the second of two free throws to make it 78-72 with 11.9 seconds to play, LC freshman Roger Ray made the basket that drew the Blue Bears within four points. His coast-to-coast drive and spinning layup with seven seconds left closed the scoring.

“He’s hit a lot of big shots for us this year,” said Bailey, who previously played for Livingstone in 2014 and last year. “We use that to motivate him. We tell him that he’s not a freshman anymore.”

Significantly — and acutely aware of its predicament — Livingstone refused to foul when WSSU inbounded the ball for the last time. Much like the ill-fated Apollo 13 space mission, this game goes down as a successful failure.

“We stayed in the area,” said Stinson, “and let them dribble it out. At that point, that was the mission. We couldn’t send them back to the line.”

Livingstone shot 43 percent from the field and outrebounded the Rams, 46-38. Sophomore Dave Duncan (11 points, 15 rebounds) recorded his eighth double-double of the winter while Bailey and Cameron Burhannon contributed 14 points apiece. Winston-Salem’s William Crandell shot 9-for-14 from the field and led all scorers with 22 points off the bench.

“When you Google the word ‘motor,’ a lot of General Motors stuff comes up,” said Wilhelmi. “If you go to like the third page you’ll find Crandell.”

In any case, the Blue Bears head into the tournament on a somewhat-positive note.

“I expect us to go in with our heads up and get these wins,” Bailey said. “Everyone’s playing for a win. We’re playing to see another day.”

NOTES: The tournament begins Tuesday at Bojangles Coliseum. Livingstone has reached the CIAA finals in each of the past three seasons. It won successive championships in 2014-15 and lost to Virginia State in last year’s final.