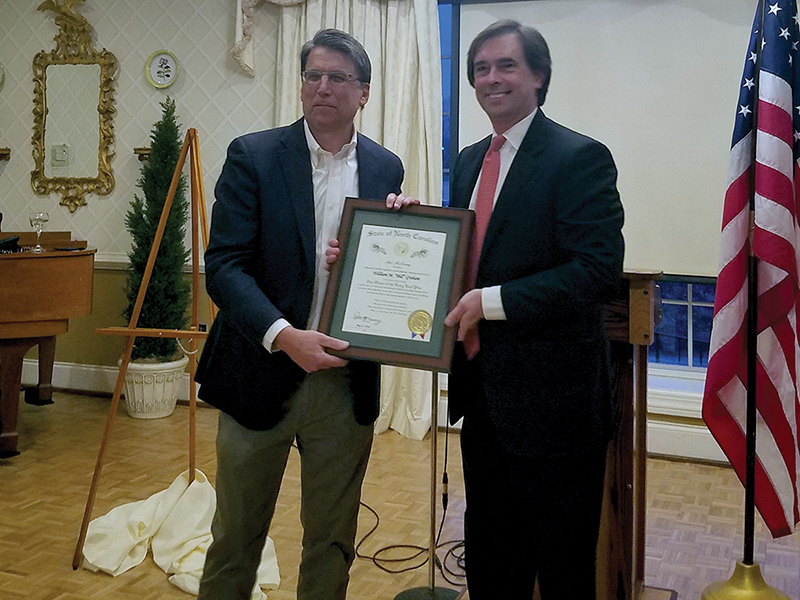 Graham received the award in a surprise ceremony at Salisbury Country Club. Graham thought he was headed to dinner with Catawba College President Brien Lewis. Instead, he walked into a room filled to the brim with friends, family, professional acquaintances and even one of his college professors.

The Order of the Long Leaf Pine award is given to people who demonstrate exemplary service to the state of North Carolina. It is considered among the most prestigious awards the governor can present.

McCrory, who signed the award before leaving office in January, said Graham deserved it because of his “total devotion to his town.”

“He’s kind of a behind-the-scenes miracle worker with regard to his commitment to the city, to the state and to his family,” McCrory said about Graham before Friday’s presentation. “I think all of Salisbury nominated him. … When a problem needs to be dealt with and a vision initiated, you call Bill Graham and he returns the call.”

For his part, Graham said he is grateful and humbled to receive the Long Leaf Pine award.

“It’s an honor to be recognized by the citizens of the state, but there are a lot of people that volunteer every day for all kinds of causes that don’t get recognized,” Graham said after Friday’s presentation. “This is special. I’m honored, humbled and very appreciative.”

He said that at least half of the award belongs to his wife, Shari.

“Those of you who are married know that you don’t do anything by yourself,” he said. “Those of you who live in Salisbury know that, when I come home from work, the fundraisers that all or most of y’all participate in to raise money for the community — the community care clinic, the Red Cross, Meals on Wheels — all of that hard work is done by this lady, my wife.”

Graham’s other philanthropic efforts stretch far and wide, from raising money for Boy Scouts to donating money to Catawba College, his alma mater.

“He got even nicer when he met his wife, Shari,” Silverburg joked.

After Catawba, Graham attended Antioch University School of Law in Washington, D.C., for two years before completing his law degree at Wake Forest University. In 1991, Graham was hired as an assistant district attorney. In 1993, he joined the law firm of Wallace and Whitley. In 1996, he became a partner at a law firm known at the time as Wallace, Graham and Adkins PA.

On Friday, Wallace described the importance of Graham’s professional accomplishments. She said Graham has handled thousands of cases involving cancer. In one year, Graham’s work was able to detect more than 250 cases of cancer early, she said.

Graham’s many political endeavors include a 2008 bid for governor. In that race, Graham faced McCrory in the Republican primary.

“When we ran against each other, he was gracious during the campaign and even more gracious in dealing with defeat,” McCrory said. “He’s been a role model for me.”

After the 2008 campaign, Graham would go to work for McCrory in various political capacities — serving on the N.C. Economic Development Board and helping to revive the state’s historic preservation tax credits.