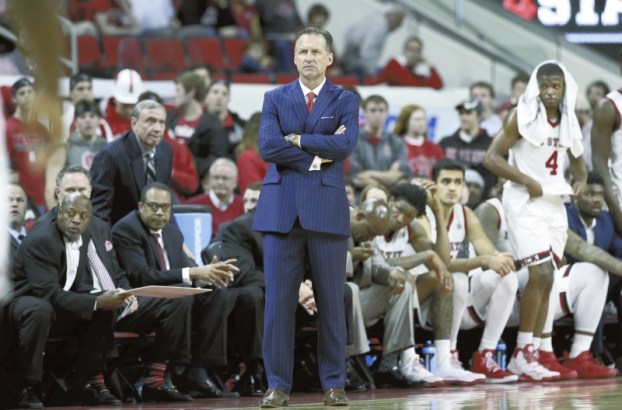 The school announced Thursday that the coach is out after the season. The move comes as a once-promising season continues to unravel, with the Wolfpack struggling to compete in Atlantic Coast Conference play and losing games by lopsided margins.

N.C. State has lost six straight games with four of those by at least 24 points, the last coming Wednesday night against 10th-ranked rival North Carolina.

“Our focus now remains on supporting our student-athletes and staff over the final weeks of our season.”

Gottfried had a 122-82 record with the Wolfpack, including NCAA Tournament trips in his first four years that included two Sweet 16 appearances.

But N.C. State has slid to 30-30 over the past two seasons — including 8-24 in Atlantic Coast Conference play — and struggled to maintain continuity amid transfers, players leaving early to pursue professional playing careers, and staff turnover.

Gottfried had declined to talk about his future after Wednesday night’s 97-73 loss to the Tar Heels. N.C. State hosts No. 25 Notre Dame on Saturday.

“It has been a privilege to serve as head coach of N.C. State, and I’m proud of what we have accomplished during my time here,” Gottfried said in a statement Thursday. “N.C. State is a special place and I appreciate the opportunity to finish the remainder of the season.”

Gottfried got a new five-year deal in 2015 that paid him roughly $2.5 million per season. The contract will require N.C. State to pay him nearly $2.3 million to buy out the final three seasons running through April 2020.

N.C. State (14-13, 3-11 ACC) was picked to finish sixth in the 15-team ACC after adding one-and-done prospect Dennis Smith Jr. at the point and getting West Virginia transfer Terry Henderson back from an injury that cost him nearly all last season to go with experienced returnees Abdul-Malik Abu and Maverick Rowan.

But the Wolfpack fell apart once league play started. The highlight came Jan. 23 when N.C. State won at Duke for the first time since 1995 behind a dominant performance by Smith, but it hasn’t won since.

The biggest culprit has been the Wolfpack’s defense.

N.C. State ranked 234th nationally and worst in the ACC in KenPom.com’s adjusted defensive efficiency rankings (107.3 points allowed per 100 possessions) through Wednesday’s games, 61 spots behind the next worst ACC team and better than only four teams from power-5 conferences.

Along the way, Gottfried tried being positive in his public comments and insisting the team was making progress even after head-scratching losses. He also tried angrily demanding his team to toughen up and show more defensive effort. Yet the same problems kept recurring.

Gottfried inherited a program that had missed the NCAA Tournament in the 15 of 21 years since the Jim Valvano era. He got the Wolfpack back into the tournament and had five wins against nearby national powers Duke and UNC with a won’t-back-down approach both on the court and in pursuing top-tier recruits.

The highlight of Gottfried’s tenure was a victory over LSU in the 2015 NCAA Tournament opener on a last-second shot, then the Wolfpack upset No. 1 seed Villanova to reach the Sweet 16. But last year’s team stumbled with a short-handed roster and this year’s squad — featuring a half-dozen newcomers and two new assistant coaches — looks headed for a similar record despite having more talent.