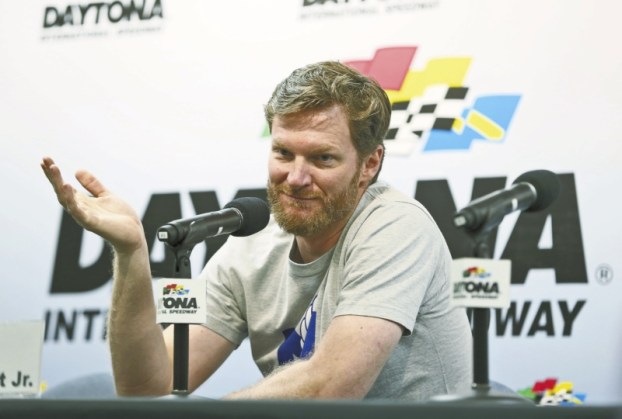 AP Photo/Wilfredo Lee, File ... In this 2016 file photo, Dale Earnhardt Jr. gestures as he speaks during a news conference at Daytona International Speedway. NASCAR has a new sponsor, a new format and a familiar face this year in its bid to rebound from declining ratings and attendance. The next 11 months will show if Dale Earnhardt Jr., Monster Energy and different rules can provide the needed jolt.

NASCAR hopes for boost after big swings at spicing it up DAYTONA BEACH, Fla. (AP) — NASCAR has a new sponsor, a new format and welcomes back its most popular driver, all providing optimism for a series eager to halt a steady decline in attendance, ratings and sponsorship.

Money is down across the board and everyone is doing more with less to try to save a buck.

The on-track product for the stock car series officially reports for work Friday at Daytona International Speedway, which hosts the Feb. 26 season-opening “Great American Race.” It will kick off a season of hold-your-breath, we-really-hope-this-works efforts by NASCAR, the networks, tracks, teams and drivers to turn things around.

This season begins with Monster Energy roaring into its debut year as title sponsor amid promised marketing to millennials and the opportunity to lure new eyeballs to a sport with an aging audience. Part of the new razzle-dazzle approach is a wholesale redesign of the definition of a NASCAR race.

Remember how NASCAR just ran in circles for 500 miles nearly every Sunday for hours on end? Well, this year it’s about “enhanced competition” in segments broken up over three periods. Think of it like innings in baseball or quarters in football or basketball. More accurately, the quick first two segments are now the appetizer to the longer main event. In the meantime, you get to go grab a beer as the television networks promise to use the breaks between segments to dump all the commercials.

Even better, you won’t have to wait for Nationwide’s beloved “Water Cooler Dale” commercial to see NASCAR’s most popular driver. Dale Earnhardt Jr. is cleared for competition after missing the second half of last season with a concussion. Earnhardt’s sidelining absolutely cut into the audience, and had to send shivers down NASCAR’s spine over its dwindling cast of superstars.

Jeff Gordon is in the TV booth now, Tony Stewart is retired. They had seven championships between them and NASCAR is counting on Earnhardt to bring his fan base back to the track with him. How important is Earnhardt? Chicagoland Speedway, site of the Sept. 17 opening playoff race, has promised a full refund to anyone who buys a single-day ticket to that event between now and the Daytona 500 if Earnhardt wins for a third time.

But be prepared, Dale is different! He’s married, head-over-heels in love and you can double-click his Instagram account if you like photos of a man who has finally, in his 18th season, settled into his skin and found a peace that he is sharing with the entire world.

“Getting married has been incredible. I wish I would have figured this all out sooner,” he said. “I’m frustrated with myself that I took so long to grow up because I have an amazing wife and she’s changed my life. She’s really helped me as a person to become better on all fronts — personally, and all my friendships with people and how I react to people and treat people. And, obviously, in my professional life, she’s helped me as a driver.”

“I got real close to not being able to compete and it being someone else’s decision whether I competed or not,” Earnhardt said of the long medical process to restore his health. “I don’t know when I’m going to stop racing, but I want to able to make that choice and not have it made for me.”

NASCAR, though, must prepare for life after Junior, because Jimmie Johnson — who just won his record-tying seventh championship then had Snoop Dogg play at his party — and champions Matt Kenseth, Kevin Harvick and Kurt Busch aren’t getting any younger.

NASCAR hopes it’s off to a good start with Daniel Suarez, the only non-American in the Monster Energy Cup Series who has become a sensation in his native Mexico. Only he didn’t get a promotion for becoming the first foreign-born series champion with an Xfinity Series title last November. No, the 25-year-old Suarez was promoted when Carl Edwards abruptly walked away.

That’s right, the guy who came 10 laps away from winning his first championship last November gave up his seat at Joe Gibbs Racing. The 37-year-old Edwards gave no clear explanation on what he plans to do now, but his refusal to use the word “retire” seemingly left open a return in some form.

But none of this matters unless the racing is good, the characters come out and somebody provides drama. There was some Thursday, the day the garage opened to Cup teams, as the nasty fight between Danica Patrick’s old sponsor and her race team. Stewart-Haas Racing has sued Nature’s Bakery for $31 million for dumping the final two years of its three-year contract. Nature’s Bakery said Thursday it will fight and won’t allow the team to “bully us.”

NASCAR, meanwhile, introduced a new penalty structure and the rules for the upcoming season — on Thursday. That’s right, the details surrounding the 36 championship races were locked down the day before the buildup officially begins to NASCAR’s version of the “Super Bowl.”

So we wait to see what this season brings, while NASCAR holds its breath.

From staff reports In first-round action in the state individual wrestling tournament in Greensboro, a number of local wrestlers opened... read more