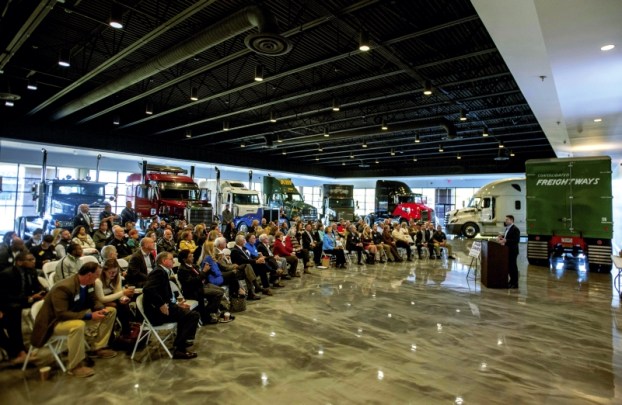 Henning O. Bruns shared these details Thursday about the Daimler Trucks Cleveland plant that he manages and the company overall:

• Seven Daimler Trucks North America plants — one in Portland, Ore., and six in the Carolinas

• 700 motorcycles hoped-for as this year’s escort

“This is a tremendously proud day,” said Bruns, manager of the Cleveland plant since 2015.

People attending the chamber’s Power in Partnership breakfast sat amid 10 massive truck cabs in a building that was once an American LaFrance fire truck museum. The cabs ranged in vintage from Freightliner’s beginnings in the 1940s, before Daimler bought the company, to two of its latest models, which boast 8 percent more fuel efficiency over their predecessors.

One was the black-and-red Phantom, the 5700XE, built only in Cleveland. Beside it sat the newest model of the Cascadia, which Bruns said was made in Mexico and will also be manufactured in Cleveland next year.

Bruns traced the history of the plant and soon got to the elephant in the room — the ups and downs of Freightliner’s workforce, which takes the local economy up and down with it. “The truck market has been and probably will continue to suffer from economic swings,” he said.

Demand was on an upward swing in 2014 when the Freightliner plant added a second shift and mushroomed to 3,100 workers.

Bruns described the “perfect storm” that hit the next year. The plant was making two very different truck models that were new to its workforce, and training wasn’t sufficient, he said. At one point, 900 incomplete trucks were sitting in surrounding lots and fields.

The plant was awarded another new model to launch. Both shifts were working hard and putting in a lot of overtime, Bruns said.

“Then the market started to cool off.” Companies that had placed orders delayed delivery. And delayed it again. The market for used trucks shifted. Industrywide, heavy-duty truck orders plunged nearly 37 percent in December 2015, according to the Wall Street Journal.

Actions like that put a burden on the community, businesses and families, he said. The company tries to buffer the impact by giving laid-off employees six months of health care coverage and two months’ full pay, he said.

“I think we have recuperated. … We are looking to see what’s possible in the future.”

The plant is producing 78 trucks per shift with a workforce whose average age is 47 — a sign of valuable experience for a plant that needs to know how to build trucks of various complexities, he said.  “We believe we have the knowledge on board to handle anything.”

Automated driving and less-costly batteries with longer duration could revolutionize travel for cars and trucks, Bruns said. Already, Daimler trucks are fitted with data-collecting devices that sense trouble and can even make sure parts are delivered to an upcoming stop in order to minimize downtime.

Meanwhile, Bruns has dreams for the museum taking shape beside the company’s manufacturing facility, to cater to Daimler’s fleet customers and perhaps someday be open to the public.

“We want to show the legacy,” he said. That could include more old trucks as well as a little gas station and a diner. He’s on the lookout for trucking-related memorabilia — signs, neon, everything trucking. “I know they are hidden somewhere.”

Representatives of three fleets are scheduled to visit Freightliner soon. Bruns envisions them flying into Charlotte and spending the night there, then traveling to Cleveland to witness Freightliner’s quality and efficiency. He said he hopes visitors some day can stay near the plant, perhaps in Mooresville.

And he reinforced RowanWorks and the Brown family’s marketing of a 115-acre industrial site at the corner of U.S. 70 and Amily Hill Road, near the plant. So much growth is drawn to south to Charlotte, he said. “We need to pull more to the north.”

Bruns, who grew up in Germany, said Daimler is now a global company and makes a wide range of vehicles. Daimler Trucks has seven plants in North America. Daimler has several facilities in Mexico.

Bruns had little to say.

“We are basically staying out of the discussion,” he said.

‘This is a country of immigrants’: Businesses, workers show their economic impact