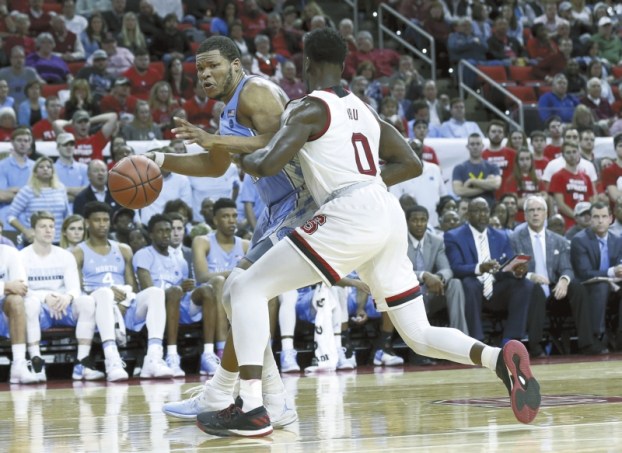 The Tar Heels dominated the paint. They controlled the glass. They shot the ball well and took the crowd out of it early. When it was over, they had rolled to a 97-73 victory Wednesday night that kept them alone in first place atop the Atlantic Coast Conference while further increasing the uncertainty about the future of sixth-year Wolfpack coach Mark Gottfried.

“Like Coach (Roy Williams) always said: we control our destiny,” said Joel Berry II, who scored 18 points. “And if we want to be the top team at the end of the season, it’s all on us. I think everyone on this team realizes that and that’s why we had such great practices coming into this game.”

The Tar Heels finished with a 60-22 edge in points in the paint, a 41-25 rebounding advantage and 27 second-chance points — a strong follow to last month’s 107-56 win against the Wolfpack that stood as the second-worst loss in N.C. State’s history.

“We knew it was going to be a battle,” said Theo Pinson, who had 12 points on 6-for-8 shooting while starting for injured Kenny Williams III. “I’m glad we punched them in the mouth early and just kept it going.”

Freshman Dennis Smith Jr. scored 27 points but little else went right for the Wolfpack (14-13, 3-11), who continued their accelerating descent that had Gottfried greeted by a smattering of boos during pregame introductions.

Picked to finish sixth in the 15-team league, the Wolfpack sits ahead of just one team in the standings with four regular-season games left. And since earning its first win at Duke’s Cameron Indoor Stadium since 1995, N.C. State has lost six straight games — four coming by at least 24 points.

Asked if he felt he needed to make his case to athletic director Debbie Yow to keep his job, Gottfried declined.

UNC: The Tar Heels have won 21 of 23 meetings against N.C. State, and dominated this one despite playing without Williams (right knee) while Isaiah Hicks played just 7 minutes due to foul trouble.

N.C. State: The season that started with potential has crashed. N.C. State followed Saturday’s 30-point loss at bubble team Wake Forest with another performance filled with bad defense, enough that the Tar Heels had emptied their bench with the team up 93-64 with 2 minutes left — and a chant of “Tar! Heels!” coming from a section of red seats upstairs.

It marked the first time the Tar Heels had beaten the Wolfpack by at least 20 points in each regular-season meeting since the 1992-93 season. The 24-point margin also matched UNC’s largest against the Wolfpack in PNC Arena.

Williams, a 6-foot-4 sophomore, could be out the rest of the season after suffering the knee injury in Tuesday’s practice. Roy Williams said the guard would have surgery next week for a procedure with a typical recovery time of 4-6 weeks.

Luke Maye finished with a career-high 13 points off the bench for the Tar Heels with Hicks battling foul trouble, including a play when he pump-faked Omer Yurtseven from 3-point range and drove untouched for a dunk against a defense that rotated no one over.

UNC: The Tar Heels have a big ACC game Saturday at home against No. 14 Virginia.