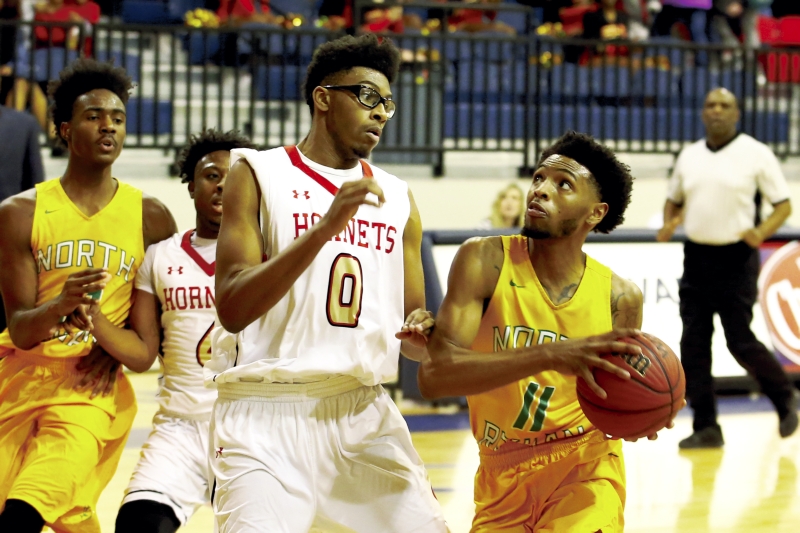 James Sipes/for the Salisbury Post ... North Rowan’s Joe Scott, right, is shown driving in the Jan. 28 game against Salisbury at Goodman Gym. Last night against the Hornets, Scott scored 25 points as the Cavaliers won, 62-60, in the CCC Tournament semifinals in Lexington.

The third-seeded Cavaliers regrouped, re-focused and recharged themselves in the third quarter, then held on for 62-60 victory against Salisbury in the Central Carolina Conference Tournament semifinals.

“We spent a long time playing catch-up,” coach Andrew Mitchell said at Lexington High School, where North (14-10) advanced to tonight’s conference championship game. “In practice, we have a drill where we have to score 50 or 60 points in a minute or two. So to be down five or six, we weren’t out of the game. The main thing was not to panic and continue playing defense.”

No. 2 seed Salisbury (14-7) took the lead on Trell Baker’s power-drive layup late in the first quarter and held it until late in the third. Its fate was sealed with a miss when Baker penetrated the lane and put up a shot at the final buzzer, only to watch the ball tumble off the rim and to the floor.

“Sometimes you get the shot you wanted, but the ball doesn’t bounce your way,” said SHS coach Bryan Withers. “Trell wanted to win the game, but that shot would have gotten us to overtime. That’s all we needed.”

It was a tension-filled game, an old-fashioned, backyard brawl that saw the Hornets take a 36-30 lead when senior Tre Oats muscled his way for a layup with 4:40 remaining in the third period.

“We knew we weren’t playing our game in the first half,” said North’s Henderson Lentz. “I know I was playing soft. It’s a good thing we weren’t down 20.”

It’s a better thing that senior guard Joe Scott plays for the Cavs, turf toe and all. Still nursing an injury on his left foot, he scored 11 third-quarter points — the last two on a pull-up jumper from inside the lane as the period expired, giving North a 43-39 advantage.

“I’ll be icing up tonight,” he said after finishing with a game-high 25 points. “It really hurts. Sometimes you just have to play through it and trust your teammates.”

Lentz, who hit a pair of 3-pointers and scored 12 points, was more concerned about his teammate’s health. “I just glad Joe Scott is able to walk,” he said. “He’s the best scorer in the county.”

Mitchell called Scott “a warrior” and added: “NFL and NBA guys sit down for a long time with turf toe. Joe missed one game. He was determined not going to sit this one out. He’s a senior and he wants a championship.”

That was never more apparent than in the final minute. With the score tied 60-60, Salisbury had the ball and was holding for one last shot. As the clock neared 10 seconds remaining, Withers considered calling a timeout.

“That’s what we wanted,” he said. “But our guard (ball-handler Oshaun Robinson) left a little early. Those are growing pains, things we’ve got to get better at.”

It was Scott who disrupted the plan when he stole the ball from Robinson and raced down the right side for a potential, game-winning basket. He was fouled by Will Leckonby on the play and made two decisive free throws with 4.5 seconds to play.

“We made plays at the end of the game,” Mitchell said. “We stayed together and now we play for the championship.”

They’ll do that against top-seeded Thomasville (20-3). The Bulldogs ran the table in winning the CCC regular-season crown and have won 15 straight games since a loss at Randleman (63-56) on Dec. 16.

“It should be a hard-nosed, tough, aggressive game,” Mitchell said. “But if all things go our way, we have as good a chance to win as they do.”