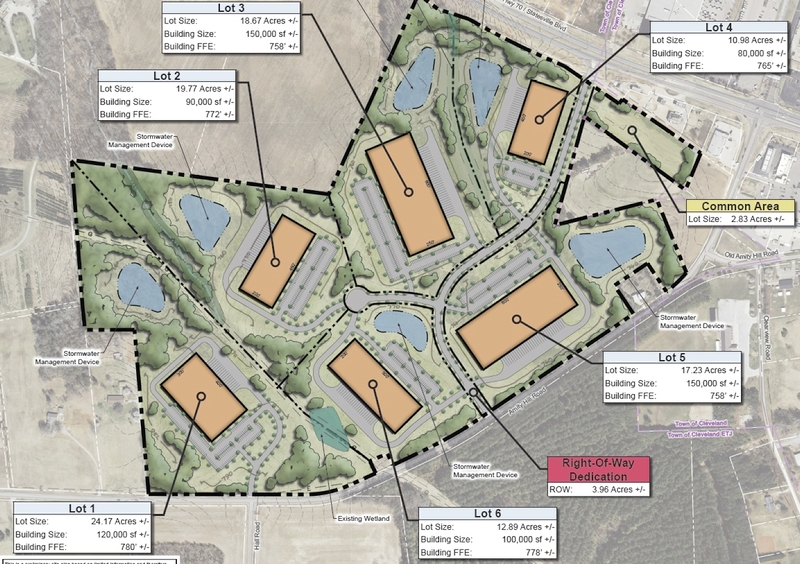 The 115-acre Brown site, shown holding five possible facilities in this rendering, sits near the intersection of U.S. 70, running across the top of the plan, and Amity Hill Road, on the right side. Stimel & Associates rendering

CLEVELAND — A 115-acre tract across U.S. 70 from Freightliner  has been rezoned for light industry and is primed for development, according to Scott Shelton of RowanWorks.

Shelton, interim director of the economic development agency, spoke briefly about what he referred to as the Brown site Thursday at a Rowan County Chamber of Commerce breakfast held at Daimler Trucks’ Freightliner plant.

Situated at the intersection of Amity Hill Road and U.S. 70, the land sits beyond the Cleveland town limits but within its extraterritorial zone. The town board recently rezoned the land from agricultural to M-1 for light industry.

Duke Energy did a site readiness study of the land in late 2015. Working with Duke, Stimel and Associates drew up three potential layouts for the property for industry use:

Though the land has been on the market a few years, Shelton said Duke’s involvement and the rezoning helped its marketability. “I think it’s really gained momentum,” he said.

Shelton said the site would be ideal for light distribution or light manufacturing facilities and could spur development in Cleveland.

“We see it as a complement to Daimler,” he said.

Lake Norman Realty lists the property on its website for $3.6 million, or $29,913 per acre. “Come be part of Rowan County’s next industrial park,” the realty company’s website says.

Christine Brown told the group the land has been in her family for 10 generations.

“Where your heart is, that’s where your treasure is,” Brown said.

As a world-class company, she said, Daimler brings people in from all over and shows them the good things.

“We all need to pull together and know what we want for the area,” she said.

According to Pat Phifer, Cleveland’s mayor, the tract has always been a farm. Some neighbors raised concerns about the rezoning, the mayor said in a phone interview, but he said he hopes development of the property will lead to more jobs and tax base for Rowan County.

“It would help everyone,” he said.

Rowan weather: Getting better every day