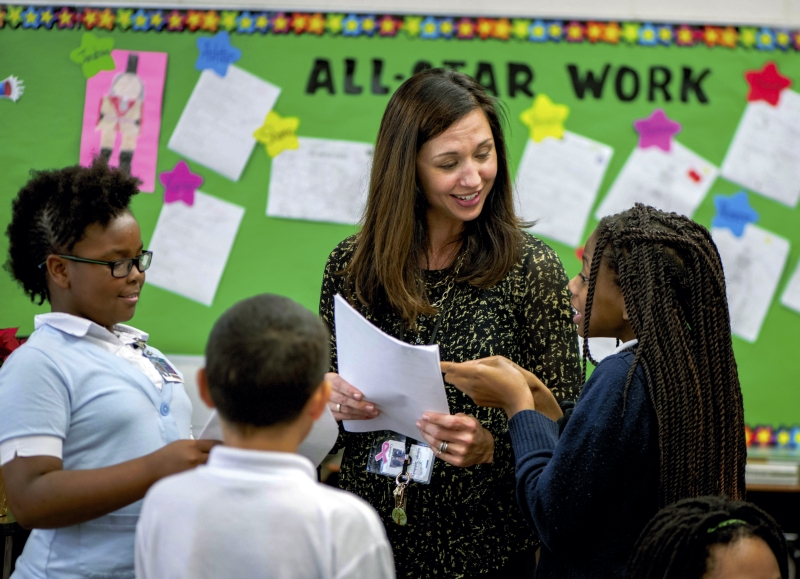 SALISBURY — When GeRita Walden resigned her post as principal at Overton in December, it didn’t stay empty for long. Candice Austin, an instructional coach from Iredell County, quickly stepped in to fill the gap.

Austin, 35, brings a wide range of experience to the table. She started her career as an Exceptional Children teacher in 2004, right after she graduated from the University of North Carolina at Charlotte. But she also served as the assistant principal at Granite Quarry Elementary during the 2014-15 school year and most recently as an instructional coach at an elementary school in Troutman.

“I’ve taught all levels of ability,” she said.

But Overton holds a special place in her heart — it’s the school that her daughter, Olivia, attends. While Austin said her daughter finds it strange to have a mother who’s a principal, she’s also found the silver lining. Austin laughs as she recalls that one day Olivia left something in a locked classroom and was shocked to learn that her mother had keys to every door in the building.

“So she was pretty impressed by that,” she said.

Austin also has a 3-year old son, Bergen, and is married to her husband of 11 years, Brad. The family lives in Rowan County.

In addition to being a principal, Austin is passionate about fitness and is actually certified as a group fitness instructor — though she’s not currently teaching any classes. She’s also an avid reader, and said she loves author Frank McCourt. Her favorite children’s book is “You Are My ‘I Love You.’”

She’s had a month to settle in, and so far said that she loves the warm, welcoming community that surrounds the school.

“We have just an incredible group who are extremely loyal to the school,” she said.

Austin said her dream for Overton is to help it become a place where students and teachers work together to make school an engaging place to learn, and where everyone is able to discover their individual talents.

But she has to tip her hat to her predecessor. Austin said that Walden was able to create a supportive, family culture at the school where parents felt welcomed and included — that’s something Austin wants to continue.

“Those are things that she did a great job putting in place and I want to stay in place,” she said.

In the future, Austin said she wants to be able to work with parents to help transform the school. The country is beginning to face a teacher shortage, and Austin said that’s a problem she hopes she can, in some small way, address.

“I want teachers to feel valued, and that’s not a job I can do alone,” she said.

But if parents and the community are able to work together, she says,  “we’re going to be ale to achieve great things.”