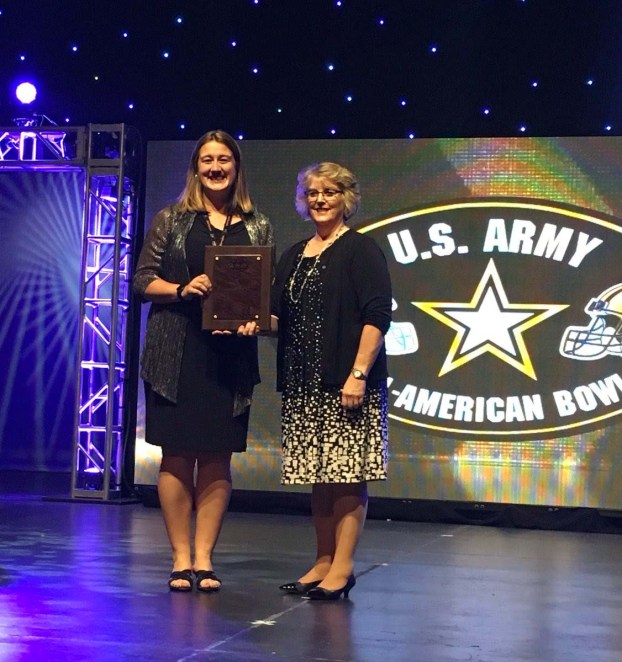 RESTON, Va. — 2017 marked the 10th anniversary of the U.S. Army All-American Marching Band, which performed at halftime during the All-American Bowl in San Antonio, Texas, on Jan. 7. The 125 students who were selected to the 2017 band spent the week rehearsing, learning from one another, and being inspired by this year’s director, Dr. Kenneth G. Bodiford, director of bands and assistant professor of music at Jacksonville State University in Jacksonville, Alabama.

“The East Rowan High School band is a small but mighty program, with about 30 students. This is the third year Emily has had a student participate in the All-American Marching Band program,” said National Association for Music Education President Denese Odegaard. “She loves working with students and helping them find that moment in music when it all comes together. She has a true passion for music, and her goal as an educator is to make sure the students keep music in their lives beyond high school.”

For eight years, McNeil has been the director of bands at East Rowan High School, where she directs the wind ensemble, jazz band and marching band. She earned a bachelor’s degree in instrumental music performance and education in 2004 from the University of Idaho. McNeil earned a master of music degree in flute performance from Ithaca College in 2008.

She enjoys working at summer music camps, including the Lionel Hampton Youth Music School at the University of Idaho, Flathead Lake Music Camp in Rollins, Montana, and the UNC-Greensboro Summer Music Camp, where she has worked for the past 11 summers. She has attended the Carolina Conductors Conference as well as the National Flute Association Convention and North Carolina State Music Educator’s Conference in Winston-Salem.

McNeil is the piccolo player in the Piedmont Wind Symphony and plays in the Winston-Salem-based flute choir, Flutes on Fourth. She has also played with the Washington-Idaho Symphony, UNC-Greensboro Wind Ensemble and University Band as well as many other community bands and college ensembles.

She enjoys attending baseball games with her husband, John who is a baseball coach and teacher at East Rowan High School.

The National Band Director of the Year Award honors the band director who has been an inspiration to students and music educators, and who by his or her actions, embodies the U.S. Army’s core values.

The award, now in its seventh year, was added to the U.S. Army All-American Marching Band program as part of its efforts to acknowledge the contribution of music education to the development of America’s youth.