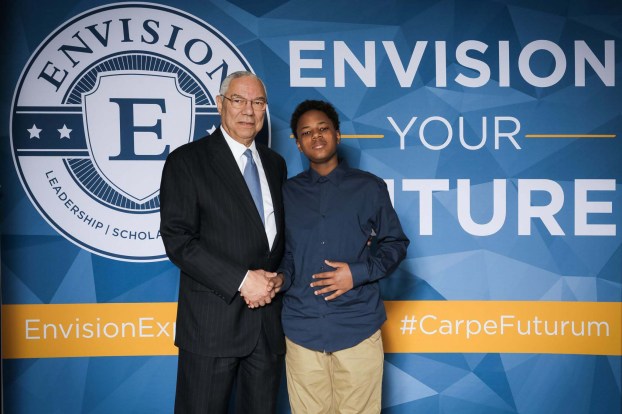 North Rowan Middle schooler Christarian Patterson has had a month to reflect on his visit to Washington, D.C. for the 45th Presidential Inauguration. Overall, he said, it was a special trip.

“I loved the experience, and I enjoyed what was happening at the moment,” he said.

Christarian had the opportunity to attend the inauguration with Envision, an international education organization offering students the opportunity to explore career and life interests. Now a seventh grader, Christarian first had an Envision experience in fourth grade after being nominated by a teacher to join. That summer, he spent time at William Peace University in Raleigh learning about forensics, the medical profession and engineering.

Since then, he’s been invited to rejoin Envision programs each year.

In January he joined 2,500 students of all grades, from all over the world, to attend the inauguration.

The family raised money through a GoFundMe page and received donations from sponsors — including local businesses and former teachers — in order to pay for travel and other expenses. Patterson said the whole trip cost about $3,000, and Christarian wouldn’t have been able to go if not for the outpouring from the community.

“I was just grateful that his character, his grades and his personality left a good taste in their mouth that they were able to give,” she said.

Prior to the inauguration students got to tour a few of the Smithsonian museums and to listen to speakers, including Malala Yousafzai, who skyped in; her father, Ziauddin Yousafzai; and Gen. Colin Powell, among others.

Christarian said the speakers talked about not giving up, not letting society dictate who you are and not letting people’s expectations stop you from achieving your dreams.

The seventh grader was even selected to ask Colin Powell a question. Christarian said he originally wanted to ask how Powell would advise Donald Trump’s interactions with Iran, but said the question was shot down. Instead, he planned to ask how Powell was able to continue being a good father and husband while serving as Secretary of State — but the event ran out of time.

Christarian did manage to snag a photo with the general, though.

But the inauguration itself wasn’t without its conflicts. Envision students weren’t able to get as close to the stage as expected due to beefed up security, but Christarian said they had a good view on a broadcast screen.

He enjoyed the speech, and said he found the line “the people will make America great again,” inspiring.

“It was cool and scary at the same time,” he said.

He also reported that some streets were closed down and blocked off in preparation for the Women’s March the following day.

In the weeks following the inauguration, Christarian has been paying close attention to the new president’s policies and decisions.

“I respect the position, but I don’t necessarily agree with everything he says or does,” he said.

The middle schooler is already forming his own opinions, and said he doesn’t really agree with the president’s decision to build a wall along the U.S.-Mexico border, or the pick of new Secretary of Education, Betsy DeVos.

But he said that doesn’t diminish the opportunity or the experience he had.

While he was raising money, people told Christarian that attending the inauguration was a once-in-a-lifetime opportunity. But he knows he’ll have other opportunities — in high school and in college. But he’ll always remember this one as the first.

“It’s … an experience I get to remember and talk about for the rest of my life,” he said.

By Hannah Davis ’17 For Catawba College SALISBURY — As a Rowan County native, Macayla Upright was no stranger to... read more