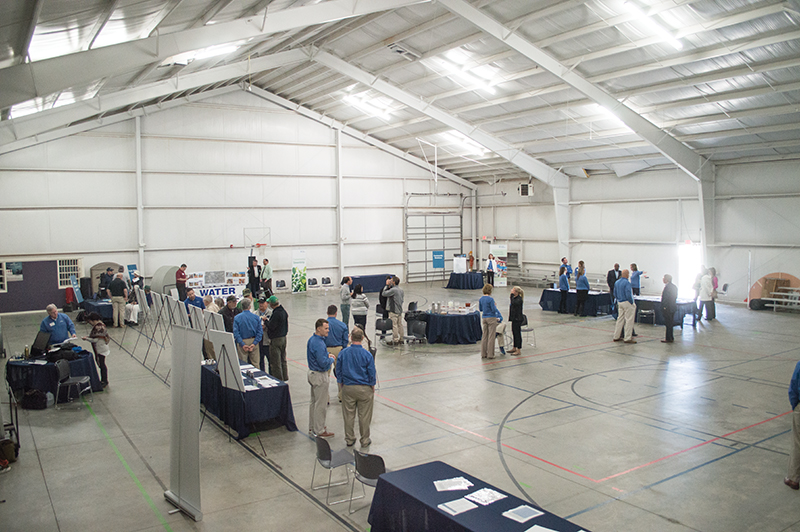 DUKEVILLE — When it’s time to decide between a water line and a filtration system to remedy coal ash concerns, some local residents say the former is a worry-free option.

People who live within a half mile of Duke Energy’s coal ash ponds in Rowan County attended a public meeting Wednesday to gather more information before choosing whether to request a water line connection or filtration system. Duke also offered information related to nearby Buck Steam Station, including details of a legal settlement that requires the company to excavate and recycle coal ash at the facility.

State law requires Duke Energy to offer some type of permanent, safe water solution to coal ash neighbors in North Carolina. Options being offered to eligible Rowan County residents include connection to a county-owned water line and filtration system. A number of residents at Wednesday’s meeting said a water line would be an easy pick.

“I think it’s going to be a good thing,” said James Leonard, who lives on Dukeville Road. “Like people were saying earlier, you never know if your well might run dry. With a water line, at least you know it’s going to be there, unless they have to get the line or something fixed.”

Reg Gobble, who lives on Leonard Road, said he, too, prefers a water line.

“I just don’t want to have to put up with a filtration system,” Gobble said. “Those can always have problems down the road.”

He said most people he has talked with prefer a water line.

Whatever the solution, state law requires Duke Energy to foot the bill for permanent, safe water for houses within a half-mile radius of its coal ash ponds.

In the Dukeville area, there are 189 houses, churches or schools eligible for a water line. In plans preliminarily approved by state regulators, Duke Energy said 142 of the eligible locations, or 76 percent, would need to accept a water line to make it a cost-effective option.

It’s unclear what might happen if fewer people sign up for a water line. Duke spokeswoman Erin Culbert said a water line might still be possible if the number of people who sign up is close to the 76 percent threshold.

The N.C. Department of Environmental Quality will have the final say in whether a water line is cost-prohibitive.

So far, roughly 30 percent of eligible residents have returned a preference card to Duke Energy, Culbert said. It’s not yet clear which solution is more popular. But last year, county commissioners received a petition in which several dozen people indicated they would sign up for a water line. That petition, however, did not reach the 142 threshold.

If a water line is installed, Culbert said, Duke Energy will pay for construction and engineering costs as required by law. Rowan County would pay for any upgrades it wants to make, such as a larger water line. County officials want the water line to be 12 inches at its largest point to serve economic development sites. Duke Energy says a 6-inch line would satisfy state law.

Commissioner Craig Pierce was among the county officials at Wednesday’s public meeting. Pierce talked about the benefits of a water line for residents.

“With municipal water, you do it and you’re done,” he said. “You don’t have to do anything else.”

Before the North Carolina General Assembly passed a law requiring Duke Energy to provide permanent water service to coal ash neighbors, county commissioners planned to build a water line in the area for economic development reasons. Now, because of the state law, the county’s costs could be reduced significantly. If a water line is built as a result of coal ash concerns, the only costs to the county could be buying a water line large enough for economic development prospects, Culbert said.

Wednesday’s public meeting continues today at the same place — Trading Ford Baptist Church — from 3:30 to 7:30 p.m. Coal ash neighbors eligible for a water line or filtration system can submit a preference card during the meeting. The card also can be mailed at a later date, Culbert said.