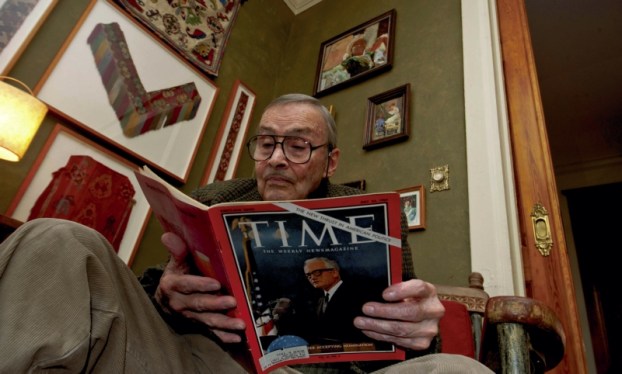 Longtime magazine and newspaper photographer Ben Martin, who was born in Salisbury, died Friday after a storied career that took him around the world. Jon C. Lakey/Salisbury Post

“I guess I just thought he was going to live forever,” she said Tuesday.

Martin’s assignments as a photographer took him all over the world, and he had incredible stories to go with most of his travels.

Nixon famously once blamed a Martin photograph — one showing the then-presidential candidate with a sweaty lip and 5 o’clock shadow — with costing him the 1960 election against Kennedy. Nixon and the photographer made up years later, though Nixon ostracized Martin for a time.

Martin’s photographs often made the covers of magazines such as Time and Life. His work was on record albums and book jackets.

In 1963, he captured lasting images at President Kennedy’s funeral. In 1965, Time magazine was ready to fly Martin to London for Winston Churchill’s funeral when editors redirected him to Atlanta instead.

From there, Martin traveled to Selma, Alabama, and for the next four days he covered the Selma-to-Montgomery March, starting at the Edmund Pettus Bridge with King and other civil rights leaders.

During the march, Chief U.S. Marshall John Doar said, “(Ben) Martin was the best shield Dr. King could have because he was always in front, photographing his every move.”

Martin documented events such as the 25th anniversary of D-Day in Normandy and the 40th anniversaries of Pearl Harbor and Hiroshima.

His corporate clients included companies such as IBM, General Motors, American Airlines, Sheraton Hotels and Carnegie Hall. He once married a beautiful actress and would co-found with her a small publishing company, Pomegranate Press, which is still in business. Martin also wrote books himself.

Salisbury, his Southern hometown, served as the bookends to Martin’s incredible career.

His ex-wife, author and actress Kathryn Leigh Scott, played four different roles on the old television series “Dark Shadows.” She has traveled to Salisbury from her home in California to take care of some of Martin’s affairs.

Scott and Martin’s friends will hold a remembrance of his life from 5 to 6:30 p.m. Thursday at Summersett Funeral Home. And there’s a lot to remember.

Martin traveled as a photographer from the Arctic to Africa, from Japan to Jerusalem. Because he wasn’t shy about sharing his stories, it sometimes could come across as bragging.

But longtime Post photographer Wayne Hinshaw said Martin had the incredible body of work  and technical skill to back it up.

“All those things are true,” he said. “He did all those things. During his time working as a photographer, he covered some of the biggest events in the world.”

In his later years, Martin often walked into the Salisbury Post newsroom with a photograph and story connected to someone famous who had just died. He knew, for example, the late ABC anchor Peter Jennings and the influential publisher of Ebony and Jet magazines, John “Jack” Johnson.

He told stories about the Castro family in Cuba and having been thrown into a Cuban jail overnight for taking a photograph of a building that was deemed a breach of security.

When he lived in London, he came to know famed British actor Richard Attenborough because of a picture he had taken of Attenborough slugging American icon John Wayne on the set of the movie “Brannigan.”

After he left Time-Life, Martin became a freelance commercial photographer. Hinshaw thought Martin overall was shrewd and often put himself in the right place at the right time.

“I think he was a good businessman,” Hinshaw said. “He could sell his brand. You have to give him credit for those kinds of things.”

Scott and Martin were together for 25 years and married for 20. They were married in Norway, Scott’s home country. The couple remained close friends and business partners after their divorce, and Scott said they still talked by telephone with each other about twice a week.

“He was widely respected, a wonderful photographer,” she said Tuesday, “and he had wonderful stories to tell.”

In marriage, they lived various times in New York, Paris, London and Los Angeles. Martin told the Post once he had the use of a flat in the heart of London for 43 years. It was less than two blocks, he said, from Hyde Park.

Martin authored, designed and photographed the book “Marcel Marceau: Master of Mime,” and he was a close friend of Marceau. Hinshaw also remembers Martin provided the photographs for the 1977 coffee-table book “A Different World” on 50 of the greatest hotels internationally.

Again, Hinshaw noted, to collaborate on a book such as that showed you just how much Martin traveled.

Martin received his first miniature box camera when he was a youngster. As a kid, he was running buddies with Rob Crawford, the longtime ophthalmologist in Salisbury.

“Our backyards adjoined, and he took me under his wing,” Crawford said. “… Benny was my buddy, and he was so good. He helped me with camera stuff. I never got any good, but I enjoyed it.”

Crawford remembers how Martin could create mini-explosions in the garden by cracking flashbulbs and using his camera to ignite the magnesium inside.

In his teens, Martin became a photographer for the Boyden High School student newspaper and yearbook. Post photographer Johnny Suther took Martin under his wing. Martin would continue to work summers at the Post throughout high school and college.

At 17, he was the youngest member of the National Press Photographers Association. Suther also taught him how to fly an airplane, and Martin became a certified Scuba deep-sea diver.

Suther could never hide the pride he had in his pupil. “Suther saw him as being so outstanding and talented,” Hinshaw said.

Martin was reared in Salisbury by his aunt and uncle, Mr. and Mrs. Luther Miller. He graduated from Boyden in 1948 and first went to N.C. State University as an engineering student. He transferred to Ohio University, which had an excellent photography program.

In college, Martin worked as a short-order cook at a White Castle, took photographs of proms and events on campus, freelanced for local newspapers and was a stringer for United Press International.

A class assignment turned out to be a career break of sorts. He spent an entire day and visited 11 different churches with a circuit-riding preacher. The Columbus (Ohio) Dispatch carried his finished report over 13 pages, which included 83 photographs.

The feature caught the eye of Wilson Hicks, executive picture editor for Life, who told Martin he could have a job after college graduation. The position did not materialize when Martin went to New York, but he took a job as a copy boy at Time instead for $40 a week.

The Army draft interrupted his new life in New York. He went to the Army’s photo school at Fort Monmouth, New Jersey. He later was attached to the Air Corps, and as editor for a weekly newspaper, he traveled extensively in the Pacific, making it to places such as Japan, Korea and Formosa.

When Martin left the Army and returned to New York, he again became a Time copy boy, making sure to show up at work daily with his camera on his shoulder. He routinely began seeing himself sent out on last-minute assignments as a photographer, and finally Time hired him as its first staff photographer in 1957.

Scott, his former wife, said she met Martin when she was 19 in New York. She was a student intern, and he was on assignment for Time. They got together for dinner that night and began dating regularly after that.

Martin eventually returned to Salisbury in the 1990s, living in his aunt’s former house. He still worked on many of the Pomegranate Press books from here, along with Scott in California.

In recent years, Martin was still picking up his camera, often serving as “chief photographer” for Historic Salisbury Foundation.

Martin snapped pictures of OctoberTour, events such as Andrew Jackson Society meetings and the making of the movie “Leatherheads,” which included scenes around the foundation-owned depot.

Martin never asked for a penny, despite his impressive credentials.

The foundation presented him with its highest award in 2013, the Clement Cup. And his work for the foundation made him great friends with board member Susan Sides and her granddaughter, Sydney (see accompanying column).

“He was so entertaining,” Susan Sides said. “When he photographed the Hambley-Wallace House, he wanted that to be perfect.”

Martin demanded that somebody wet down the mansion’s driveway so he could have the right reflection.

“He never lost the desire to make every picture he took special,” Sides said.

Longtime friend Mary Jane Fowler was serving as archivist for Martin’s vast library of images from the days of film, not digital technology. Martin had saved everything and the vastness of his collection “is just incredible,” Fowler said.

In later years, friend and fellow photographer David Willingham helped Martin with some of the new digital technology associated with photography.

Sides had recently come across a photograph from an old Boyden High School yearbook showing Martin as the photographer on the staff. She made sure Martin had a copy.

“I feel very privileged to call him a friend,” Sides said.

Here’s a photograph — the exact year is not know — of a new Cheerwine delivery truck, ready to be loaded up... read more