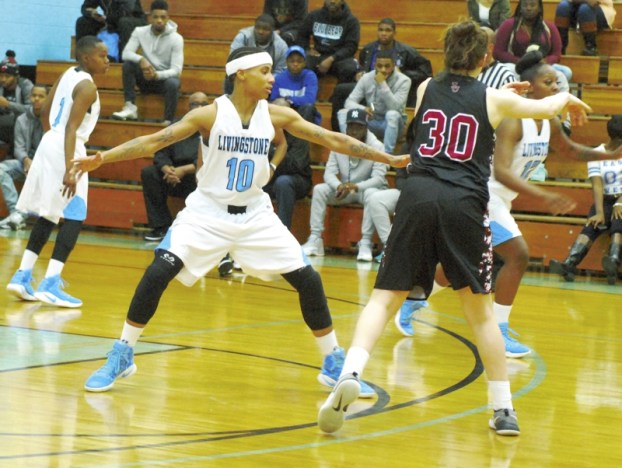 Dennis Davidson/Salisbury Post Livingstone's Zena Lovette (10) defends and forces a pass from Shaw's Julia Cordova (30) during a game on Feb. 4.

Another good sign for the Blue Bears was the fact that guard Deonna Young, a scorer who has been struggling of late, nailed a first-half 3-pointer and scored five points during the first 20 minutes.

The Falcons scored just four points in the first quarter, but bounced back in the second period behind six points each from Quiera Gilmore and Kaaliya Williams.

Coach Tiffany Silver’s Blue Bears broke the game open in the third period, outscoring the visitors, 23-11. They followed that effort up with an even better fourth quarter, 21-8, as Livingstone connected on 7-of-14 3-pointers in the second half.

Meanwhile, St. Augustine’s made just six baskets in the second half and finished the game 0-for-12 from the 3-point arc.

The lead grew and grew and the Blue Bears’ largest lead came with the final score when Young was fouled on a 3-point attempt with 28 seconds remaining. She made all three foul shots for the final, 33-point advantage.

“It took us too long to get into any kind of rhythm,” Silver said about the slow first half. “We definitely need some kind of momentum going into next week (CIAA Tournament). These games are so important, so vital to positioning for the tournament. We need to win out and we need a little help as well, just to bump up a spot.”

Guard Zena Lovette came off the bench as well, but still led Livingstone in scoring with 16 points. She’s been battling the flu this week but was 5-of-11 from the floor, including 3-of-4 from behind the 3-point arc.

Young, also dealing with the flu, ended up with 15 points, a nice rebound from recent shooting woes. She was 5-of-9 from the field, including 2-of-4 from the 3-point line.

Livingstone controlled the inside game, outscoring the Falcons, 26-10, in the paint. The Blue Bears also took advantage of 32 turnovers by their opponent, leading to 20 points.

Upcoming interest mixer for ambassadors on Feb. 23 at ballpark KANNAPOLIS — The Kannapolis Intimidators are inviting members of the community... read more