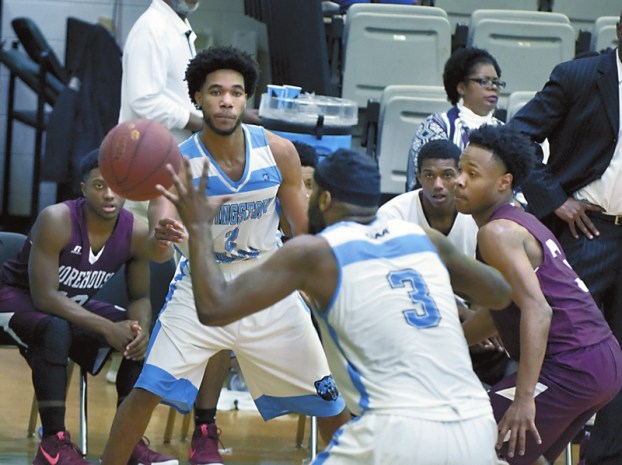 SALISBURY — The Livingstone men’s basketball team has been standing in line all season, but here’s the good news: It’s still standing.

It appears the red alert on Monroe Street is over after the Blue Bears earned their second straight CIAA victory Wednesday might at New Trent Gym — a 70-61 nod over visiting St. Augustine’s.

“We’re happy about having a chance at a rebirth going into the (conference) tournament,” coach James Stinson said. “Anything can happen once we get to Charlotte. Right now, we just have to control what we can control.”

A week ago, Livingstone (10-15, 7-8 CIAA) was a troubled team, reeling from a three-game losing streak and ready to punt, rather than contend for Southern Division title. Last night’s win boosted the Blue Bears to 6-3 in the division — and a victory at home Saturday against Winston-Salem State could clinch a No. 2 seed in next week’s tournament.

“You give up 16 second-chance points and spot them 40 in the first half, the odds aren’t good,” said third-year SAU coach MarQus Johnson. “Our effort was a lot better in the second half.”

It was. But first Livingstone built its widest margin, 47-28, when 6-foot-7 senior Darryl Bond stuck a 3-pointer from the top of the key with 17:17 remaining.

“We came out aggressive and didn’t allow them to control the game,” LC guard Cameron Burhannon said after matching his career-high with 21 points.

When the Blue Bears got sloppy (13 second-half turnovers) and went cold from the field — they managed just one basket in a 12-minute span — St. Aug’s pounced, inching within 52-47 when do-it-all big man Quincy January elevated down the lane for a flying layup with 5:38 to play.

“What went through my mind was that we’ve seen this before,” Stinson said. “We just had to make big plays right at that time. That’s when Cameron got hot. He has that potential, to make plays that turn a game around.”

He’s talking about Burhannon — the 6-3 junior who shot 9-for-12 from the floor — and the six unanswered points he scored in a frantic, 17-second spurt. First he pulled up for a short jumper from inside the lane. Then he forced SAU’s Jquwan Ruffin to pick up his dribble near the scorer’s table, stole the ball and raced down the left side for a likely slam dunk.

“Well, I was trying to dunk it,” he said. “But that’s when he grabbed me. The ball still managed to go in.”

Burhannon was credited with a layup and awarded two free throws for an intentional foul. When both dropped cleanly through the net, Livingstone had a 58-47 lead with five minutes to go.

“We still had to finish it,” Burhannon said. “We needed to take back the intensity and protect our home court.”

LC’s last basket provided a 12-point advantage came when Burhannon was credited with two points following a goaltending call with 1:46 on the clock.

Duncan added 11 points and a team-best seven rebounds for the Blue Bears. Teammate Jimmy Wilson had 10 points and six rebounds in 18 minutes off the bench. January, a 6-7 junior from Atlanta, paced St. Aug’s with 16 points and 12 rebounds, but never imposed his will on LC as Stinson used the long-limbed Bonds, Duncan and Wilson to defend him.

“They couldn’t get him the ball,” Duncan testified. “He was frustrated.”

“We just have to find a way to win,” Burhannon said. “That’s everything, every game from here on out.”

By Mike London mike.london@salisburypost.com SALISBURY — New bleachers have been installed down the first and third baselines at Newman Park, and... read more