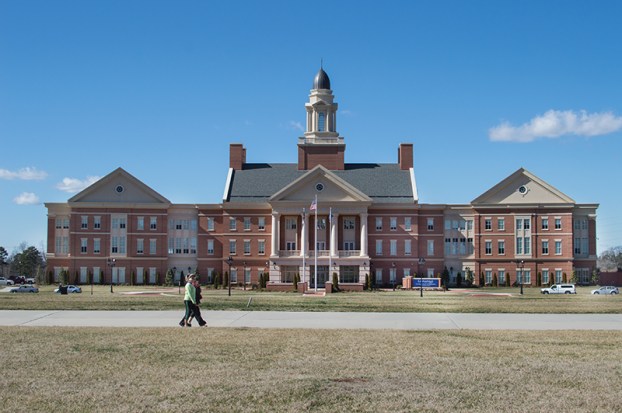 Josh Bergeron / Salisbury Post - Two people go for a walk in front of the Kannapolis City Hall, which is in the midst of a national competition with other city halls.

KANNAPOLIS — Two down. Four to go.

In a contest with other cities across the nation, Kannapolis and its City Hall have advanced to the “Sweet 16.”

Organized by a group known as Engaging Local Government Leaders, the contest — called “City Hall Madness” — functions similar to the NCAA college basketball tournament. It started with 64 city halls across America. Now, it’s down to 16.

City halls advance by receiving more votes. So far, Kannapolis has toppled Philadelphia and Portland, Oregon. This week, Kannapolis City Hall will face the city hall in Peoria, Illinois. On Tuesday afternoon, Kannapolis was leading by a small margin.

If Kannapolis wins this week, it will advance to either face Effingham, Illinois, or Redwood City, California. After that, it would need to win two more rounds to be named the best city hall in the nation.