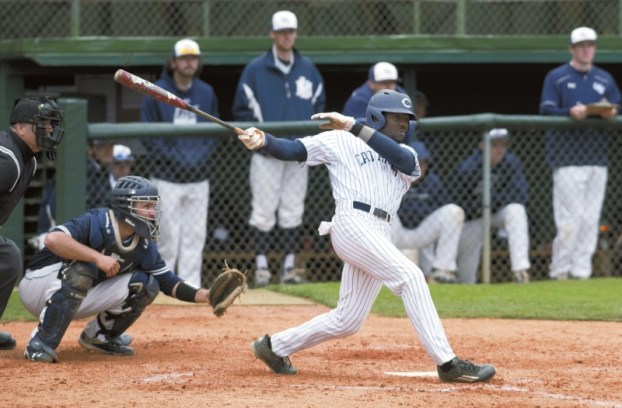 JON C. LAKEY / SALISBURY POST FILE PHOTO ... Catawba’s Malachi Hanes, right, watches his smash hit the top of the right field wall for a double during a game last season against Lincoln Memorial at Newman Park. Hanes, an all-conference DH last season, is among the returning starters for the Indians in 2017. SALISBURY — New bleachers have been installed down the first and third baselines at Newman Park, and homers soon will be flying again at the cozy ballpark.

Catawba’s baseball team has undergone a makeover as well. There are lots of new faces.

When standouts such as Will Albertson and Dylan Richardson depart, the show must go on, and it will. Jim Gantt is still coaching the team — this will be his 21st season — so the Indians are guaranteed to be good. Whether they can be great remains to be seen, but Gantt likes what he has.

“I think we’ll be fun to watch,” Gantt said. “We could have a pretty dynamic blend on offense. We’ve got some speed and some power. Our defense should be good enough. Our pitching is young, but it’s talented.”

Catawba was voted the preseason favorite in the South Atlantic Conference. That was mostly out of respect for Gantt, who entered this season with 717 college victories to go along with all of his American Legion success.

The worry at this point is that Catawba has several guys —  key guys — who are fighting injuries or returning from injuries. That group includes catcher Zac Almond, outfielder Luke Setzer and pitcher Russ Weiker.

Almond, a terrifying slugger with the arm to shut down base-stealers, missed all fall activities with a back issue. Setzer, who starred at East Rowan, broke his leg last fall. Weiker broke his elbow last season.

Riley Myers, the former Salisbury star, is currently sidelined with a back problem. Outfielder Harrison Baucom, a standout at West Rowan, was hit in the jaw by a throw while sliding into a base, had to have his jaw wired shut, and will be out for a number of weeks.

Another worry is that while Catawba won the SAC regular season title in 2016 and advanced to the Southeast Regional, it lost its last four games to finish 34-21. While 34-21 would prompt parades at some places, 34-21 isn’t what Gantt is shooting for. No one wins them all in baseball, but Catawba expects to be more like 40-15.

Who’s missing? Besides Albertson and Richardson, the Indians must replace third baseman Jake Kimball and starting pitcher Shaefer Shepard, a workhorse who threw a lot of innings.

Albertson was a guy who got on base half the time (.404 batting average, .494 on-base percentage), so his absence affects the entire lineup.

“We’ve never had anyone hit like Albertson hit the last two years and he made every other hitter in our lineup better,” Gantt said. “He was a guy they had to think about walking even when he batted with the bases loaded. So it’s going to be different.”

Almond wasn’t on the preseason team, although he’s likely to make voters regret that.

Also back is Kyle Smith, who is on the  preseason All-SAC second team. He’s an underrated player. He can hit, run and play second base or the outfield.  A consistent lefty hitter, he batted .347 in 2016, second on the team to Albertson.

Setzer (.277, 9 homers, 40 RBIs) is a returning starter in the outfield and can play right field or center. The plan is for the former East Rowan Mustang to be the leadoff man and offensive catalyst  after he turned in a fine rookie season as the No. 9 hitter.

Shortstop Jeremy Simpson (.279, 24 RBIs) also returns. The former West Rowan star isn’t bad with a bat in his hands, but his most important job will be to anchor Catawba’s defense. His glove is exceptional.

Also back is outfielder/DH Bryce Fowler, a .310 hitter. His offensive contribution is almost all singles, but he strokes a lot of them.

There’s power on hand. Almond and Hanes clubbed 13 homers apiece last season. A gap hitter, Bowden, a Salisbury High product, doesn’t belt a lot of homers, but he swats as many doubles (a school record 31 last year) as anyone in the country. In one hot stretch last season, he had a double in eight straight games.

Gantt plans for Setzer and Smith to bat at the top of the lineup, with Almond hitting third and Hanes, a left fielder/DH, batting sixth. Bowden will bat either fourth or fifth.

The other middle-of-the-order hitter will be outfielder Nick Coble. Like Hanes and Almond, Coble, a 21-year-old sophomore transfer who played high school ball at Mount Pleasant, will knock some balls out of sight.

“They’ve all got a lot of power, but they’re streaky,” Gantt said.

They won’t be as consistent as Albertson. For Albertson, 1-for-3 was a pretty nasty slump.

Bowden, a junior, will be starting for the third season. He’s so good with his mitt that he’ll play first base even if he bats .200, but he’s more likely to hit .350. He batted .324 as a sophomore.

Jackson Raper, a freshman from Concord Robinson, has won the vacant third base job. He gives the Indians another lefty hitter — joining Smith and Hanes. He’s already come through with a 4-for-4 game.

“He swings it well and he’s got a strong arm,” Gantt said.

As far as the pitching, Weiker (8-2) can anchor the rotation if he’s healthy, and there are no concerns about Blanton (3-1, 9 saves) at the back end of the bullpen, He’s shown he can close games under pressure.

But most  roles remain unsettled even as the Indians prepare to open a nine-game homestand with a doubleheader this Saturday afternoon (1:00) at Newman Park against Shippensburg (Pa.).

“Things are a lot more up in the air than usual,” Gantt said. “That doesn’t mean we don’t  have the guys who can get it done. We’re just undecided who they are.”

In the early going, freshmen southpaws Shepherd and Bryan Ketchie have started games, along with more experienced lefties Connor Johnson and Michael Elwell.

Coble, who throws hard, also can help on the mound. Returners Clay Young, Heath Mitchem (Carson) and Ryan Kahny have been used in relief in early-season games, along with UNC Greensboro transfer Cody Fitch.

Catawba has 15 pitchers on the roster, including freshman Will Horsley, the former Concord star, and Rowan County American Legion hero Sawyer Strickland.

There are a lot of options. Catawba dropped three of its first five non-conference games, but Gantt and assistant coaches Michael Lowman, Sandy Moore, Chris Holke and T.J. Wharton will get things sorted out.

Prep Basketball: West boys put it all together

By Mike London mike.london@salisburypost.com CHINA GROVE — A sweet-shooting Carson team averages 71 points per game, so the most obvious... read more