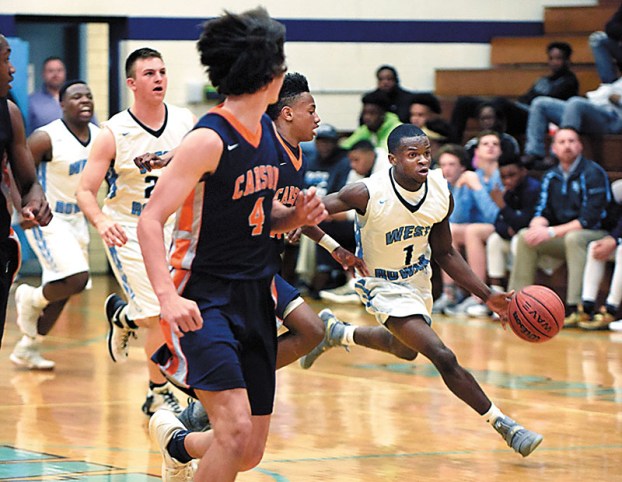 Prep Basketball: West boys put it all together

CHINA GROVE — A sweet-shooting Carson team averages 71 points per game, so the most obvious factor in West Rowan’s 76-56 victory over the Cougars in the first round of the South Piedmont Conference Tournament was defense.

“Our defense was solid,” winning coach Mike Gurley said. “We came in with pretty good concepts, some pretty good ideas on how to contain Carson. Then we executed the gameplan and we stayed with the gameplan.”

Fifth-seeded Carson (14-10) is a free-wheeling, drive-and-kick club that thrives on 3-pointers and free throws, so the basic gameplan was to make the Cougars shoot 2s.

It worked. Carson made only four 3-pointers and just five free throws.

Kortez Weeks and Austin Love were able to limit Carson’s high-scoring Jamarius Hairston to 16 points. Paris Hillie, with some relief help from Martavio Rankin, kept Carson point guard Jailen Williams, an all-conference- and all-county-type player, from penetrating, and it was a long night on the offensive end for the Cougars.

“Carson is a very skilled team and one of the best shooting teams you’ll see,” Weeks said. “But we stayed in front of their drivers and we didn’t give up a lot of open 3s. Our execution on defense was great.”

Carson also had its problems on the defensive end, where fourth-seeded West (17-8) comes at teams in a lot of ways. There’s 6-foot-8 Caleb Mauldin pounding the offensive board, and there’s lightning-quick point guard Paris Hillie constantly assaulting the rim. On some nights, there’s also Weeks, the athletic Elon football signee, rising for textbook jumpers and drilling 3-pointers.

Weeks is the X-factor for the Falcons.

“Weeks was on, and when they’re making outside shots, it’s very difficult to deal with that and to try to contain Mauldin at the same time,” said Carson coach Brian Perry after the Falcons beat the Cougars for the third time in four tries this season. “West is a tough matchup for us — and for a lot of people.”

Mauldin scored 23 points, including 11 as the Falcons pulled away in the fourth quarter. Hillie and Weeks had 15 each.

Besides Hairston, the Cougars put Owen White (14) and Catawba football signee Brenden Westbrook (12), who had a marvelous first-quarter dunk, in double figures.

The game was officiated in a manner that benefited the Falcons, who play more people and have more physical bodies. That’s not to say West got calls it didn’t deserve, just that not a lot of calls were made. There were only five fouls — that’s both teams, total — in the first half. From opening tip to final horn, the almost whistle-free game lasted just 66 minutes.

“The officials were consistent on both ends of the court, they were just letting the guys play and letting guys put their hands on each other a little bit, and we didn’t adjust to that as well as West did,” Perry said. “The game had a strange feel, like it was an early game in the Christmas tournament.”

That’s because half the usual crowd was in China Grove, watching the Carson girls host West Rowan.

White made early jumpers, and Carson led 17-15. But then West closed the first quarter with a blistering 8-0 run that included 3-pointers by Weeks and Rankin and a drive by Hillie.

When Hillie whipped a pass to Mauldin for a layup late in the first half, the Falcons led by 11 points. A corner 3-pointer by Cameron Prugh cut West’s lead to 39-31 at the break.

Carson desperately needed a strong start to the second half — and got it. West took a couple of hasty shots, and White buried a 3-pointer. When the elastic Hairston tracked down a long rebound and wiggled to the rim for a three-point play, the Cougars were down 39-37 and feeling it.

West’s lead was 42-39 midway through the third quarter when Weeks nailed a huge 3-pointer and Hillie followed up a missed layup to shove the lead back to eight points.

Carson got a timeout, but West’s momentum continued. Darius Kure, another member of West’s talented guard corps, made slick passes to Love and Mauldin for back-to-back layups, and the Falcons were up 13.

West led by nine heading to the fourth quarter and put the game away with another 8-0 flurry — a Mauldin stick-back, a Hillie drive, a Tyrese Lawrence layup on a dish by Rankin. Next came the play of the night — Mauldin-to-Love-to-Lawrence —  two unselfish passes for an easy two, and the Cougars were reeling.

The knockout punch came with 2:18 left when Mauldin rumbled in to follow a Hillie miss for a three-point play.

“You don’t expect our guards to miss layups, but you have to assume that every shot that’s taken is going to be missed,” Mauldin said. “I always try to crash the boards, and I got in position for the rebound.”

Carson’s lone win against West this season came at Carson on Jan. 24. Hairston got 30 that night, while Williams scored 16.

“In that game, Carson did whatever they wanted to do offensively,” Gurley said. “But we had a much better defensive effort tonight, and it started with Kortez Weeks.”

Carson will get some rest and prepare for the 3A state playoffs. West will take on top-seeded Cox Mill at Cox Mill on Wednesday in a 7:30 p.m. semifinal.