NBA party not in Charlotte this weekend 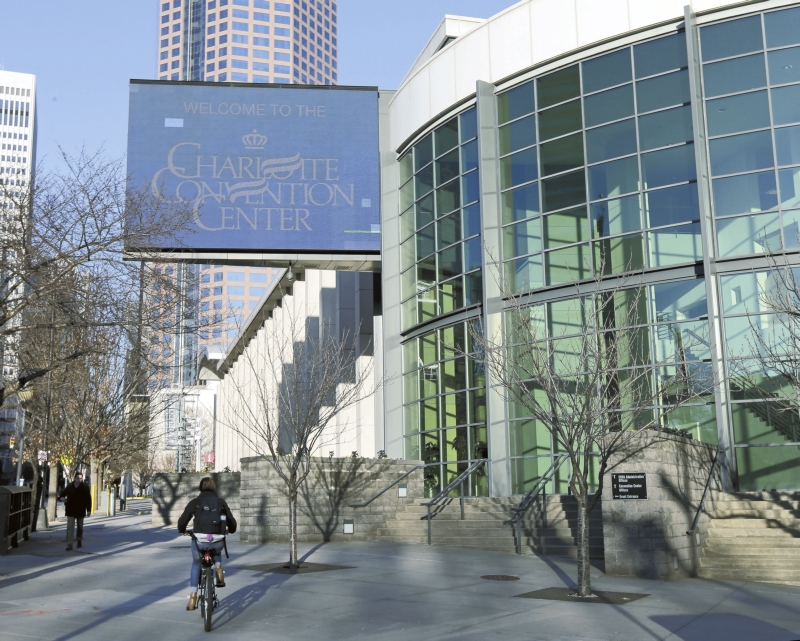 People pass by the Charlotte Convention Center in Charlotte, N.C., Monday, Feb. 13, 2017. Charlotte won't be a ghost town this weekend, but it sure won't be buzzing like many had hoped when the NBA awarded the city the 2017 All-Star game. But the league moved the event last summer after North Carolina politicians decided against repealing House Bill 2, a law that passed last March that restricts the rights of LGBT people. (AP Photo/Chuck Burton)

But since the league has moved its annual showcase to New Orleans, Doggett now has no plans to watch the game on TV.

Charlotte won’t be a ghost town this weekend, but it sure won’t be buzzing like many had hoped when the NBA awarded the city the 2017 All-Star game. The league moved the event last summer after North Carolina politicians failed to repeal House Bill 2, a law that passed last March that limits the protections of LGBT people.

As a result, Doggett — like other Charlotte residents and businesses — have been left out in the cold, looking for ways to enjoy this weekend. There is an Equestrian Trade Show in town, though it’s not generating the same level of excitement.

Vernon Jackson, also a season ticket holder, said he was looking forward to seeing the All-Star game in person but now only plans to watch when Charlotte’s Kemba Walker participates in the 3-point contest.

“I’ll watch Kemba, but as for the game itself — probably not much,” Jackson said.

Walker — Charlotte’s first All-Star since Gerald Wallace seven years ago — shares the fans’ pain. He won’t be showing off his skills in front of his home crowd.

“I have been here a long time, and it would have been really cool for the city, the organization, the fans and even me,” Walker said.

But Walker and the fans aren’t the only ones disappointed.

Charlotte area hotels, restaurants and other entertainment-based businesses stand to lose out on the $100 million impact of the game, according to Hornets COO and president Fred Whitfield.

Before the league moved the game, it was almost impossible to find a hotel in downtown Charlotte near the arena for this coming weekend. Now, the Westin is offering rooms starting as low as $90 per night.

The Charlotte Convention Center was going to host many of the events, including the interactive NBA All-Star Experience. Now the biggest event on the center’s calendar this weekend is the International Equestrian Trade Show.

NBA Commissioner Adam Silver said in October that returning the All-Star Game to Charlotte in 2019 is “a high priority,” provided there’s a resolution to the so-called bathroom bill, which limits which restrooms transgender people can use in government buildings and schools.

But that’s no guarantee.

Newly elected Democratic Gov. Roy Cooper wants to repeal the law, but so far attempts to do so with the GOP-controlled legislature have failed. A federal trial to decide the legality of HB2 is scheduled to begin later this summer.

Hornets owner and former NBA great Michael Jordan declined comment, but has spoken out against any form of discrimination in the past.

“We are extremely disappointed we lost the game because we worked so hard as a community to get it,” Whitfield said. “But we did support commissioner Silver’s decision to move the game. We, like the NBA, don’t believe in any form of discrimination but we felt like it was incumbent upon us to move the game as long as the HB2 situation lingered over our city and state.”

Along with the All-Star game, North Carolina has had major music headliners like Bruce Springsteen cancel concerts dates and the Atlantic Coast Conference pull its neutral site championship games out of state, including football which featured national champion Clemson.

Forbes estimated in November that HB2 has cost North Carolina $630 million in lost revenue since it was passed in March of 2016. They stand to lose millions more if the NCAA pulls the state’s tournament bids for the next six years.

“HB2 has cost North Carolina every single day with businesses and events leaving a state that has written discrimination into law,” Equality NC executive director Chris Sgro said in an email. “… The economic damage already experienced because of HB2 is only the beginning.”

Meanwhile, Charlotte is left wondering what could have been.