Lessons from the podium 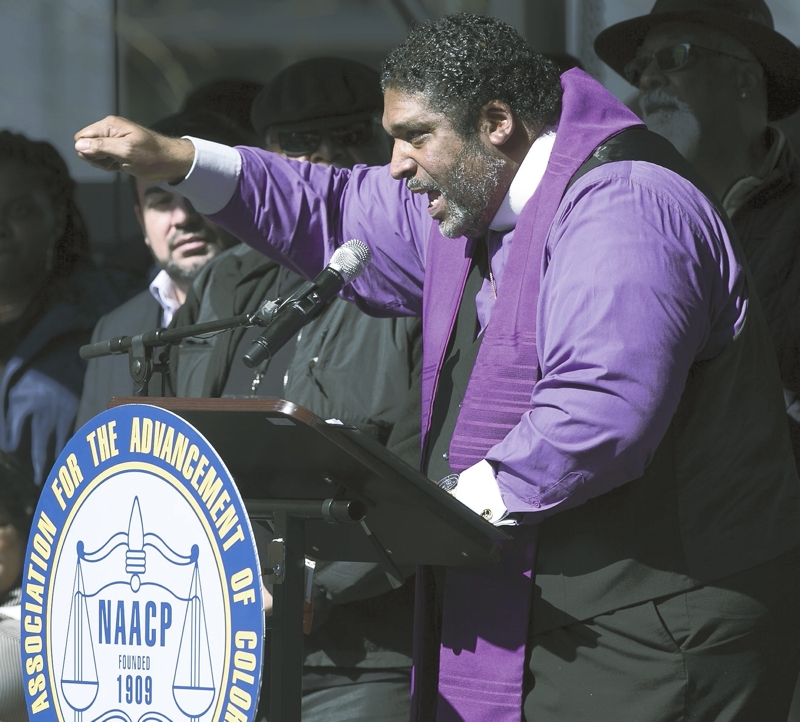 Rev. William Barber speaks during the annual “Historic Thousands on Jones Street" (HKonJ) march in Raleigh, N.C., on Saturday, Feb. 11, 2017. The rally was organized to express support for the Affordable Care Act, opposition to President Donald Trump’s plans to build a wall along the border with Mexico and his executive order on immigration. (Robert Willett/The News & Observer via AP)

Rob Schofield,  director of research for N.C. Policy Watch, on the Moral March held in Raleigh, spearheaded by the Rev. William Barber, president of the North Carolina NAACP:

Three of the most important and powerful messages at Saturday’s event came directly from Rev. Barber and were in keeping with the general aura of optimism that prevailed.

No. 1 was Barber’s reminder that as toxic as today’s policy environment has become, it’s important to remember that this is hardly the worst that things have ever been for forward-thinking Americans. This is not to say that there aren’t many dreadful days ahead in life under a president the NAACP leader rightfully characterized as an “extremist, narcissistic con artist,” but in a country that has endured and overcome slavery, Jim Crow, Japanese internment and the denial of basic rights to women and LGBTQ citizens, it’s important to keep one’s perspective.

No. 2 was the message that the recent and inspiring spate of marches (and the fast-growing anti-Trump movement generally) are anything but a “spontaneous” development as some in the media have alleged. To the contrary, Barber observed, today’s growing movement is clearly just the latest chapter in what is a long and proud struggle for freedom and justice that has ebbed and flowed throughout the history of the Republic. To talk about the modern-day resistance to Trump without linking it to the pre-Civil War abolitionists, the “Fusion” movement of the late 19th Century, the fight for labor rights, the civil rights movements of the mid-20th Century or the peace movement is as illogical as discussing Trumpism without highlighting its links to the nation’s dark and longstanding traditions of racism, nativism, sexism, homophobia and economic exploitation.

The third and most hopeful lesson from the podium on Saturday was Barber’s reminder of just how much the Trumpist forces fear the progressive movement. The evidence for this, he noted, is in the remarkable lengths to which conservatives have been forced to go in recent years to hold on to power. Simply put, one doesn’t employ the outrageous gerrymandering and voter suppression tactics conservatives have embraced (or resort to the remarkable action of inviting/facilitating the interference of a foreign government in the nation’s election) unless one is genuinely fearful of one’s opponents.

As Barber rightfully observed, the American Right knows how potentially powerful the growing progressive movement is, and that’s why it will do almost anything to stop it. …

Sadly, one issue in the current national debate in which the kind of energy and hope on display Saturday have been notably and destructively absent is with respect to Trump’s nomination of the extreme right-winger Neil Gorsuch to serve on the U.S. Supreme Court.

For the denizens of the American far right — especially the religious right — the Gorsuch nomination is the vindication of their hypocritical and cringe-inducing embrace of Trump. It is their ultimate victory and the payoff they demanded for their essential assistance in electing a president whose personal character even they abhor.  …

And progressives? Where are they on the Gorsuch nomination? Tragically, the answer, thus far, is mostly AWOL. Despite the powerful entreaties of a bevy of civil rights organizations like the highly respected Alliance for Justice many rank and file progressives are frustratingly silent.

John Hood: Lawmakers should save budget, not spend, surplus