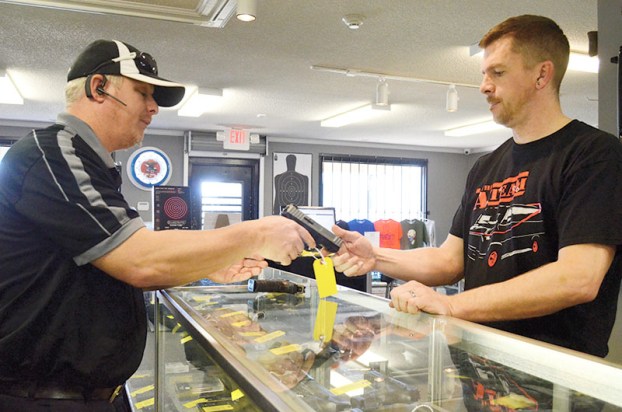 Brian Scarf, left, gets help from Adam Ervin at Pistol Pop's gun shop. Scarf decided to buy a gun after four teenagers tried to force their way into his van. Shavonne Walker/Salisbury Post

Concealed carry permits on the rise for January

SALISBURY — Eight months ago, Brian Scarf made up his mind about buying a gun and getting a concealed-carry permit after he was attacked while on the job in Charlotte.

Scarf, who lives in Salisbury and works for Geek Squad, said while sitting in his vehicle, some teenagers tried force their way into the van. He wasn’t physically harmed, but the incident was enough to make him want to feel more protected.

His thoughts during the ordeal went to his family.

Later this month, Scarf, his wife and a group of their friends will complete a concealed-carry handgun class.

Scarf stopped by a local gun shop, Pistol Pop’s Firearms at 3018 S. Main St., to see what gun options he and his wife have.

Sheriff Kevin Auten said one of the reasons for the increase is that people don’t feel safe and having a gun is like a “security blanket.”

Asked if there is a correlation between the rise in permits and discussions about gun control measures, Auten answered by saying there are also increases after a mass shooting or bombing. He said some people don’t feel safe and want to be able to protect themselves.

Other reasons for the increase, Auten said, could include the availability of money.

“We typically pick up in January and February coming out of Christmas. Tax refunds are starting to come back. We really think it’s the timing of the seasons and, oddly enough, we usually go down in the summer months on concealed carry. People get busy and they travel, and the teachers don’t instruct quite as much,” he said.

“But coming out of the holiday, it seems like all of our concealed-carry instructors are very active right now,” Auten said.

Auten said an uptick in crime could also be a reason.

“It will be interesting to see the political landscape subside some because people don’t have that fear factor we’ve seen for eight years, or does it continue to go in an upward tick because of crime and what happens in our country and our community?” he said.

Auten said he expects the number of permits to continue to climb for the year.

In 2016, the Sheriff’s Office issued a total of 3,739 concealed-carry permits. Most went to new permit holders.

“As we work through these years of increase, I look for next year to be really high because 2013 was our highest year we ever had. It’s 3,009 that we processed in 2013, and next year that’s going to be those 3,009 coming back for renewals, plus any new applicants,” Auten said.

“It will snowball in the next couple of years,” he said.

Those who obtain a permit must also attend an eight-hour class with trained instructors.

“The state certifies the instructors, and they monitor what they teach so we want them to do a good job. And those classes are only eight hours. And we want the instructors to push those students and answer their questions and, you know, hopefully the benefit is they feel more secure about what they know about the law and what they can do and can’t do, and when they can and can’t,” Auten said.

Gunsmith Chris Waller, who is owner of VooDoo Custom Weapons, is one of those firearms instructors. Waller said he’s seen an increase in the number of people who attend his weekend classes. Waller said his class size has doubled this year over last year.

Last year, he averaged 30 people a month for classes. As of early February, he has already exceeded that number.

Waller agrees that violence in the city and county can contribute to more people seeking permits. But he also suspects the talk of new gun legislation will have something to do with the contined increase.

There is also discussion of a nationwide concealed-carry license, which Waller said is attractive to gun permit holders.

“Most of what I’m seeing is folks who are generally interested in protecting their families, while some people want to better understand the law,” Waller said.