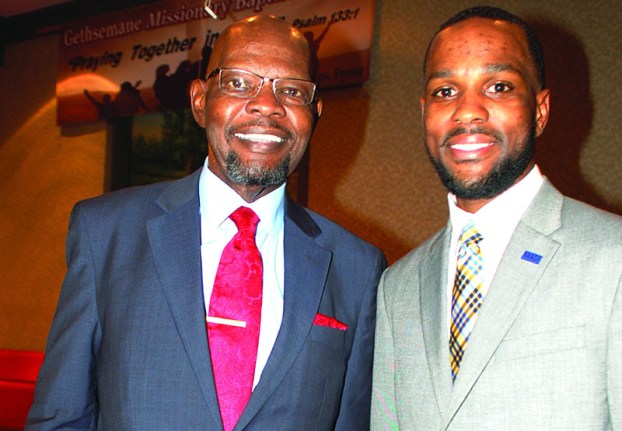 SALISBURY — The newly installed president of the Salisbury-Rowan Branch of the NAACP said Sunday that by no means does he know it all, but he’s willing to listen, learn and fight for what’s right.

“We’re going to go out there and do some footwork,” new Branch President Gemale Black said at the 108th birthday celebration of the NAACP, the oldest civil rights organization in the country. The NAACP was founded Feb. 12, 1909.

Sunday’s celebration, which included the swearing in of a new slate of branch officers and the executive committee, was held at Gethsemane Missionary Baptist Church.

In brief remarks toward the end of the celebration, Black told his fellow NAACP members they were in a fight, and while the organization will not be able to fix all the problems, it will be out in the forefront.

Black promised he personally will run off facts, not emotions.

“When the facts don’t add up, we’re coming,” Black said.

Black said he and the NAACP look forward to working with city and county officials and law enforcement.

On the law enforcement end, Black said he hoped for a collaborative partnership that reduces crime, resolves outstanding cases and expands and promotes community policing.

The Rev. Dr. Clary L. Phelps, pastor of the church, gave a rousing talk as main speaker, reminding the audience of the sacrifices made by NAACP members over the past century and rallying today’s organization to stick together to make a difference in the future.

Phelps said Sunday’s gathering celebrated the birthday of a worthy, historic organization, which represented the fortitude, mind and strength of many people fighting for political, social and economic equality.

The NAACP activists of the past met in homes, streets, fields and churches.

“And thank God for the churches and their pastors,” who thought their flock should have a little heaven while they were still on earth, Phelps said.

“Let the kingdom come on earth,” he added. “We ought to have a piece of the pie while we’re here.”

Phelps said he was talking to a fellow pastor before Sunday’s celebration, and they agreed that every church in Salisbury and Rowan County should have been represented.

Phelps called on today’s NAACP members to work, plan, train, educate, learn together and “fight the powers that be.” He said injustice, hatred, racial discrimination and a flawed legal system in the state and country are still problems.

And in a definite reference to President Trump’s recent campaign slogan, Phelps said, “I think you better define what you mean when you say, ‘Make America Great Again.'”

He asked is it an America “that doesn’t look at me as a human being?”

“What kind of America are you talking about?”

Phelps called on his audience to stand together against Jim Crow laws and the dividing of educational lines that cause economic fallout, crimes, no jobs, poor schools and dying communities.

If the NAACP is to continue, Phelps said, it must recognize the new evil that is disguised in places such as the classroom, government, banking and court system. He added that freedom must be demanded, that people must go to City Council meetings and be heard.

“You have to demand what you want,” he said. “… Now is the time to be part of history that will make a difference.”

He also called on members to look inward first in making a difference in their own meetings, strategies, neighborhoods, homes and schools.

An overreaching theme for Sunday’s celebration was “Forward Together, Not One Step Back.”

The Rev. Anthony Smith swore in the Salisbury-Rowan Branch of the NAACP’s new slate of officers.

The Rev. Marcus Fairley presided over the celebration program, which was followed by a reception in the James L. Stowe Fellowship Hall.

Annual membership dues in the NAACP are $30. The local branch meets the first Thursday of each month. The March 2 meeting will be held at 7 p.m. at Gethsemane Missionary Baptist Church.