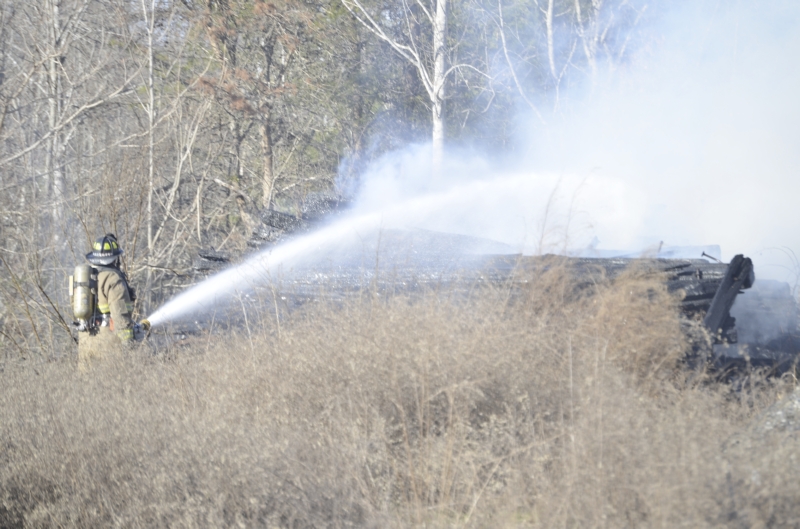 Multiple fire departments responded to a fire at 1830 Sherrills Ford Road where officials said a large number of wood used for bridge matting, some tires and an old camper were parked in a field caught fire. The owner of the property brought a back hoe to help move around the material to make sure fire wasn't trapped underneath. Shavonne Walker/Salisbury Post

SALISBURY — A Monday afternoon fire is under investigation, fire officials said, after a large amount of wood used to make bridge matting, tires and a camper caught fire. Black plumes of smoke filled the air along Sherrills Ford Road.

Someone saw the fire and contacted the owner at Kepley Grading, who then told an employee to check the situation. Then someone called 911, Locke Fire Chief Rusty Alexander said.

Firefighters responded at 2:27 p.m. By 4 p.m., they were still putting water on the material, sending white smoke into the air.

Alexander said the wood pieces were massive and stacked about 8 feet high and were about 40 feet long. The camper was not inhabited and had been on the property for about eight years, he said.

The property is beside Trinity Church and near Mooresville Road. The property was mostly vacant with overgrown grass. The only structure on the land was an old barn, and tractor-trailer cabs were also on the property.

Alexander said the owner was looking to bring in a backhoe to dig around the material to make sure there was no fire underneath.

The Rowan County Fire Marshal’s Office is investigating the fire.

The fire was upgraded because of its size with the following agencies responding:Locke, Salisbury City, South Salisbury, Cleveland and Franklin fire departments and Rowan County Rescue Squad.