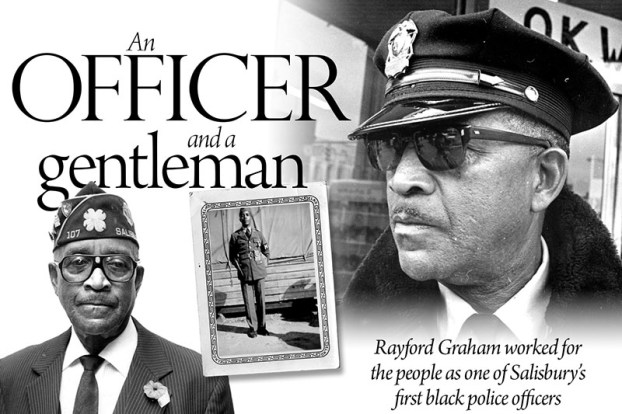 Ernest Davis, too, went on to serve his community

Ernest Davis was another early Negro officer with the Salisbury Police Department, hired in 1963, a tense time all over the South.

Davis, then 29, had been a football standout at Livingstone College in 1948, though he’d had to leave school to take care of his growing family.

He was hired to replace R.H. Harold Cowan, another Negro officer, who resigned.

Davis served in the Marine Corps during World War II and had finished two years at Livingstone at the time.

He was appointed to the police department by Salisbury’s City Manager Col. S.C. MacIntire following a recommendation from Police Chief David Shuler, who had hired Rayford Graham and Alonzo Grant in 1949 as the first Negro officers on the force.

Davis was a son of Harvey Lee and Odessa Reed Davis and he had worked on the railroad, too. After leaving the police force, he served for many years as the superintendent of buildings, grounds and security at Livingstone College.

He finally got his degree in 1969, graduating the same year as one of his daughters. His wife, Annie Veen Morton Davis, also graduated from Livingstone, as did three other daughters and a son, two of the girls earning degrees before David could return, and another daughter and son after he completed requirements for the degree.

A 1972 press release from Livingstone College said he was the first black sergeant with Salisbury Police, and worked there for 14 years.

In 1968, he set up a security guard force at Livingstone and was the security officer at the time. He had been appointed by the late Dr. Samuel E. Duncan, Livingstone’s president at the time.

At the same time, he was asked to serve as acting superintendent of buildings and grounds, so he held two full-time jobs and was a student at the same time.

By 1972, Davis directed a staff of 40 in six departments. He divided the building and grounds work into different departments, with a head for each, including plumbing, custodial, electrical and motor pool.

In the 1972 press release, it says “The Salisbury native believes that everyone should have pride in his work and he tries to instill this in his personnel. But pride begins with the leader, and Davis has proven to be an excellent one.”

In addition to managing multiple departments at the college, Davis, in 1970, was elected chairman of the committee for “the permanent project area committee for urban renewal of the west end” in the fall of 1970.

Serving with him were Rayford Graham and the man Davis replaced in the police department, Harold Cowan.

The project surveyed 247 buildings in the neighborhoods of West Innes, Institute Street, Bank, Partee and Monroe streets and others in what is called the West End.

At the time, 96 homes were designated as “standard,” 65 as needing “major repairs” and 86 as “dilapidated.”

Thus began the process of urban renewal, when many African-American residents lost their homes to redevelopment, ushering in another huge change in the history of African-Americans in Salisbury.

In 1970, Davis was quoted as saying, “Once an idea is born, there is nothing anyone can do to stop it until it reaches maturity, and this is where we are. The idea has been born.”

SALISBURY — Rayford Graham died almost 10 years ago at the age of 94, leaving an impressive legacy of accomplishments, including serving for 26 years as a Salisbury police officer.

In 1949, the hiring of Graham and Alonzo Grant was called an “experiment in race relations.” They were known as the first Negro officers on the force, although a black man served on the force in the late 1800s.

The two worked from 4 p.m. to midnight. Grant, a native of Michigan and graduate of Hampton Institute, had been the Rowan County Negro Farm Agent. He stayed on the job just two years, moving to California.

At first, the city put Graham and Grant on a standard six-month probation. A report from the day said their “activities were confined exclusively to the Negro race.”

Chief Dave Shuler changed that policy when his confidence in Graham grew. Shuler told him he could arrest a white person if he wasn’t anyone important, such as a doctor or lawyer.

Graham told the Post in 2004 that the first white man he took to the magistrate’s office asked him where the white officers were.

Change was slow in coming.

Yet in 1971, Graham received a citation from the Salisbury City Council for “dedicated service to the community and his exemplary service with the Salisbury Police Department.” The citation, signed by then-Mayor Elmer L. “Sonny” Allen Jr., says Graham “has created an atmosphere of respect and good will throughout our community.”

Graham was recognized for his work with youth, saying his dedication “builds a more solid foundation for understanding between people for the future.”

That was just one of many honors Graham received. His living room walls in 2004 were covered with certificates and plaques, and he told reporter Mark Wineka he had other awards in the house that he had never framed.

After retirement, he created another legacy as a volunteer. He worked with Gethsemane Baptist Church, the American Legion, the Veterans Service Council, the VA Medical Center, Masonic Lodge, West End Community Organization, J.C. Price High Alumni and the NAACP, among other groups. He logged almost 6,000 volunteer hours at the VA and sometimes helped transport patients from Salisbury to Durham.

He earned Service Officer of the Year awards in 1979, 1989 and 1990. He was nominated again in 2001, cited for visiting sick and shut-in veterans. He also transported widows to the county service office to help them get their entitlements.

“I have even been arresting somebody and somebody will walk up, even somebody I’ve arrested before, and say, ‘Do you need any help, Mr. Graham?’ ”

He said then, “Being a policeman is pretty rough. Sometimes you just want to give it up and quit, but peace and harmony in the department and with the city help to make a great department.”

In the fall of 1970, he and fellow officers Ernest Davis and Robert Harold Cowan served on “the permanent project area committee for urban renewal of the west end.” Davis was elected chairman.

This was the group involved in what was called urban renewal. It resulted in many homes being torn down in the area known as West End, to be replaced with public housing.

It could not have been an easy task, going through the surveys, telling people their houses were too dilapidated to save.

Graham told the Post in 2004 his police job was one “I never really did enjoy,” but he had a family to support and he was selected by Shuler in 1949 because of his years as a military policeman during World War II.

Graham said he was glad he stuck with the job as long as he did but that when he turned 62, he thought a younger person would do a better job.

Graham said he never fired his gun at anyone. He drew his gun once and shot into the air to freeze a fleeing suspect.

A drunk once punched him in the face and broke his glasses. Graham charged the man with bring drunk, not drunk and disorderly, but the judge added that charge when he heard what happened.

He was known for always writing everything down in case he had to testify so defense attorneys couldn’t trip him up.

In his days on the force, officers and revenuers still chased bootleggers and conducted raids on illegal lotteries, often called “butter and eggs” because the winning numbers were the daily butter and egg prices in the newspaper.

He was drafted into military service but stayed stateside, eventually traveling through at least 30 states for his duties.

Graham had not been able to finish at Price High School because of the war, but he got his diploma just months before being hired as a police officer. At the same time, he worked at Rowan Memorial Hospital.

Under his photo in the Price yearbook was this quote: “Do all the good you can, to all the people you can, in all the ways you can, just as long as you can.”

Graham did just that for 94 years.

By Shavonne Walker shavonne.walker@salisburypost.com SALISBURY — A Monday afternoon fire is under investigation, fire officials said, after a large amount of... read more