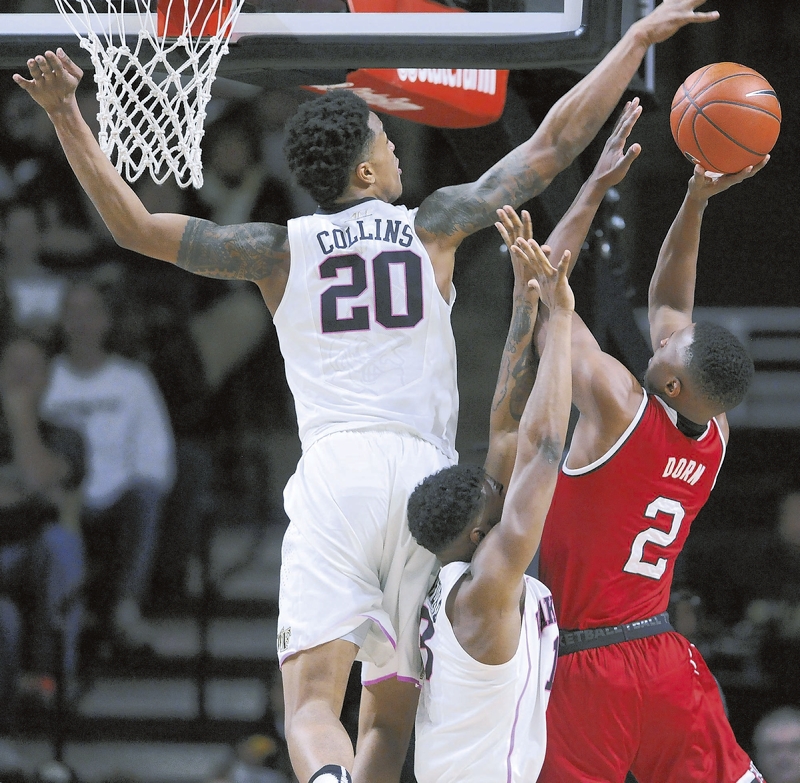 WINSTON-SALEM (AP) — Wake Forest got up big on North Carolina State and didn’t let up in a performance that had coach Danny Manning pleased by his team’s attention to defensive detail.

As for the Wolfpack, coach Mark Gottfried is struggling to stop a descent that seems to be picking up speed.

John Collins scored 23 points to help the Demon Deacons beat the Wolfpack 88-58 on Saturday, earning their first regular-season sweep in the series in a dozen years.

Keyshawn Woods added 19 points for the Demon Deacons (15-10, 6-7 Atlantic Coast Conference), who ran off an 8-0 burst to go up by double figures midway through the first half on the way to turning the game into a rout. Wake Forest led 44-24 by halftime and by 33 points midway through the second half.

“Those guys are unselfish, they play hard, they play together, they sacrifice for one another,” Manning said. “I just thought today defensively we competed for two halves.”

Wake Forest won last month’s meeting in Raleigh for its first ACC road win in three years, snapping a skid that had reached 25 games. The Demon Deacons followed that by earning their most lopsided win in the series since December 1980, shooting 54 percent and making 11 of 23 3-pointers.

“I think we came out there with fire, with energy,” Collins said. “We talked and we were flying all around the place, passing the ball, scoring. I think we found our energy, found our flow early, and we kept them down like we were supposed to and finished out the game.”

Dennis Smith Jr. scored 17 points to lead the Wolfpack (14-12, 3-10), who offered meager resistance as Wake Forest kept stretching out its lead. That prompted Woods to note afterward: “We knew if we got up early on them, they was going to quit.”

N.C. State shot just 36 percent, including a 2-for-15 showing from behind the arc.

“We just have to continue to play hard and fight,” said Torin Dorn, who had 14 points for the Wolfpack. “When you’re down, the only thing you can do is fight. And there’s nowhere to go now but up. We have to keep fighting.”

N.C. State: It’s hard to explain the Wolfpack’s clunker of a performance. N.C. State had already lost by 51 points at rival North Carolina this season, was coming off a 24-point loss at Florida State, and now has five straight losses since upsetting Duke for its first win at famously hostile Cameron Indoor Stadium since 1995.

“We’re going to keep fighting,” Gottfried said. “And you’ve got to kind of eliminate some of the other things that’s kind of around us and we’ve got to kind of draw in a little closer together as a team and stay together. We’re the same team that went into Cameron and won.”

Wake Forest: The Demon Deacons are in NCAA Tournament contention with what has been a solid step forward for the program under Manning. This is the first time Wake Forest has swept a pair of ACC regular-season series since 2008-09.

Collins posted his eighth straight 20-point game in ACC play, the longest such streak in the program since the 1974-75 season. He finished 9 of 13 from the field to go with seven rebounds and two blocks.

Gottfried said his team needed to have more poise at times in this one. That was clear on the bench as senior center BeeJay Anya — who didn’t travel with the team to FSU due what the school called simply a “coach’s decision” — jawed multiple times with heckling Wake Forest fans behind the nearby baseline.