Trap game survival: No. 18 Duke holds on to beat Clemson 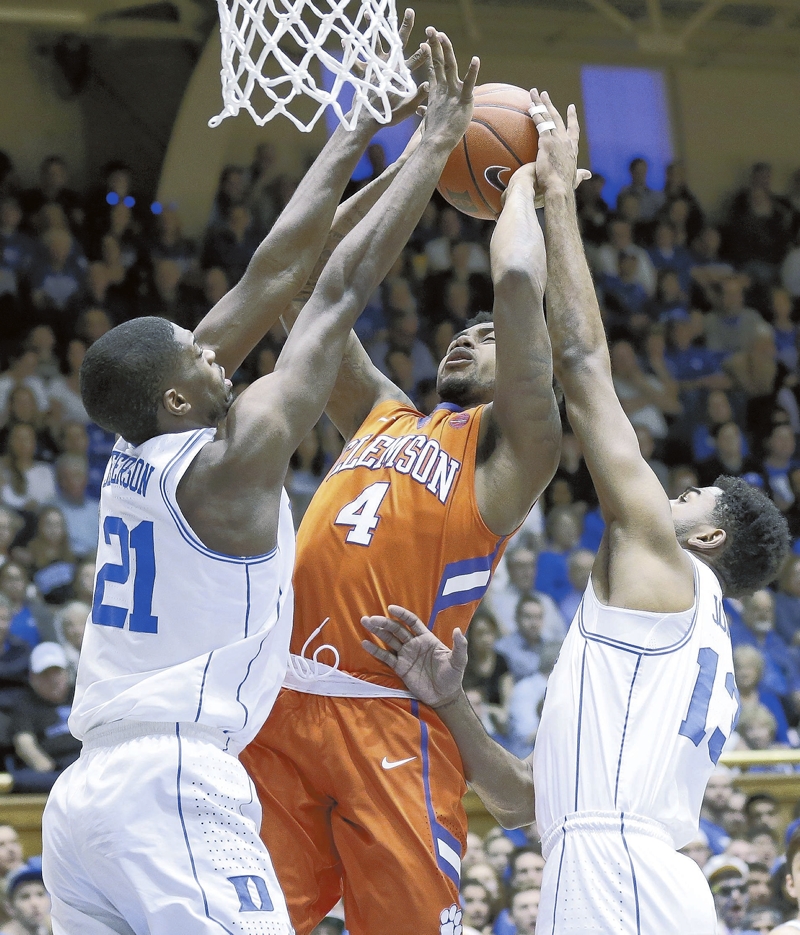 DURHAM (AP) — No. 18 Duke spent so much energy beating its fiercest rival that it had almost none left for Clemson.

The Blue Devils rode Luke Kennard’s scoring and Matt Jones’ defense to yet another home victory over the Tigers.

Kennard scored 25 points and the Blue Devils held on to beat Clemson 64-62 on Saturday.

Playing less than 48 hours after an emotion-draining victory over No. 8 North Carolina on Thursday night, the exhausted Blue Devils (20-5, 8-4 Atlantic Coast Conference) blew a 14-point lead in the second half and needed a stop at the buzzer to seal their fifth straight victory.

“We had to beat human nature today,” Jones said.

Shelton Mitchell had a career-high 23 points and Elijah Thomas finished with 15 for the Tigers (13-11, 3-9), who have lost three straight and were denied their first win at Cameron Indoor Stadium since 1995.

The Tigers had a chance to win it or send it to overtime after Thomas rebounded Frank Jackson’s missed 3-pointer in the final seconds. Kennard deflected a pass out of bounds near midcourt with 4.3 seconds left to set up Clemson’s final inbounds play.

Donte Grantham inbounded the ball in the backcourt to Mitchell, who dribbled toward the right wing but couldn’t get a clean look against Jones before the buzzer sounded.

Clemson: The Tigers were trying to join North Carolina State as teams earning their first victory at Cameron since ‘95 — and just the fifth win here in their history — and certainly put themselves in position for it, after catching the Blue Devils on short rest. But they wound up with two losses this week by a total of three points , and six of their defeats in ACC play have come by five or fewer points.

“Unfortunately,” coach Brad Brownell said, “a little bit more of the same for us.”

Duke: This was a game the Blue Devils simply couldn’t afford to give away in their push to make up ground in the league standings. They have got a tough road the rest of the way, with only two of their remaining six games at home and three matchups with Top 25 opponents looming.

“These last couple weeks, we’ve grown a lot,” coach Mike Krzyzewski said. “We’re a team, and we’re getting better, and we’ve been, really, very tough. Hopefully, we can keep that going.”

For about 9½ minutes in the second half, Kennard was the only Duke player who could score. He reeled off 15 consecutive points for his team and finished with 20 in the second half while reaching the 20-point mark for the third time during the winning streak.

Clemson’s Jaron Blossomgame couldn’t get started. He averages 17.8 points but was held to a season-low seven on 3-of-12 shooting with Jones — Duke’s most dependable defensive player — guarding him. … Duke’s Grayson Allen finished with eight points on 2-of-10 shooting.

The Tigers might have given themselves a better chance had they just made a few more shots early. They shot 18 percent during an 18-point first half — their lowest-scoring half of the season. Clemson made two shots in the first 68 seconds of the half, then just three more before halftime.

As the Blue Devils left the court and went into the locker room, Jones was heard shouting to his teammates, “A win’s a win, man.”

The NCAA Tournament selection committee revealed its preliminary rankings about 30 minutes before tipoff. It had the Blue Devils as the 16th seed overall and the No. 4 seed in an East Region led by top overall seed Villanova. Of course, there are still four weeks before Selection Sunday.

Clemson: The Tigers return home to take on Wake Forest on Tuesday night.

Duke: The Blue Devils visit No. 12 Virginia on Wednesday night.