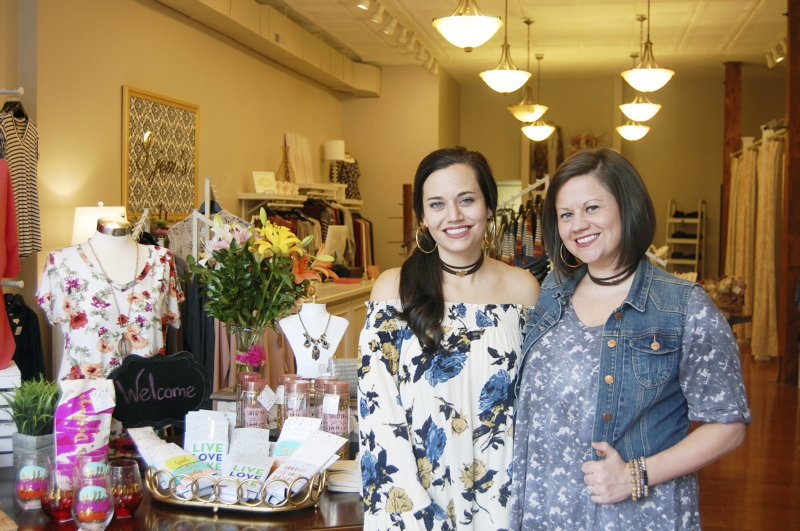 SALISBURY — Sisters Jenna Faggart, Emilee Stamper and Meredith Little were raised in the Gold Hill area. They went to school in Mount Pleasant.

So after they opened their first boutique in Concord, the logical place for them to open a second was Salisbury.

“It felt only natural after opening a store in Concord to open one here,” Little said.

Their boutique, 3 jem’s, opened at 102 S. Main St. on Feb. 1. The boutique opened in just three weeks so it could be part of last week’s Wine About Winter wine-tasting crawl.

Little said she and her sisters have wanted to own a business together since they were young girls. But as they grew up, they decided to go to school for different things.

Little said she hated commuting to Charlotte for her job, so she revived the idea of opening a store.

None of the sisters knew much about running a retail store before opening the Concord boutique. Little said they did some research online and sought advice from other business owners. Their father owns his own construction company, so he was able to help as well.

Little said they learned the most from trial and error.

Each of the sisters has a role for the boutiques. Stamper handles the technology side of the business, as well as insurance and taxes. Faggart is the fashion expert. Little handles staffing, communications and marketing.

By the way, the “jem” in 3 jem’s boutique combines the first letter in each of the sisters’ names.

The store sells clothes, shoes, jewelry and other accessories for women of about high school age and older. The styles range from casual to formal.

Little said when they opened, people thought they sold clothes that only younger women would like. But they carry styles for older women as well.

“If you have a wide variety for everyone, you’re going to sell more. We kind of hit everyone’s style,” Little said.

Right now, the sisters are working to have the same products at both locations. They would eventually like to open more locations.

Little said she hopes 3 jem’s boutique will be a good addition to downtown Salisbury.

“We hope being here brings more business to us and businesses around us,” she said.