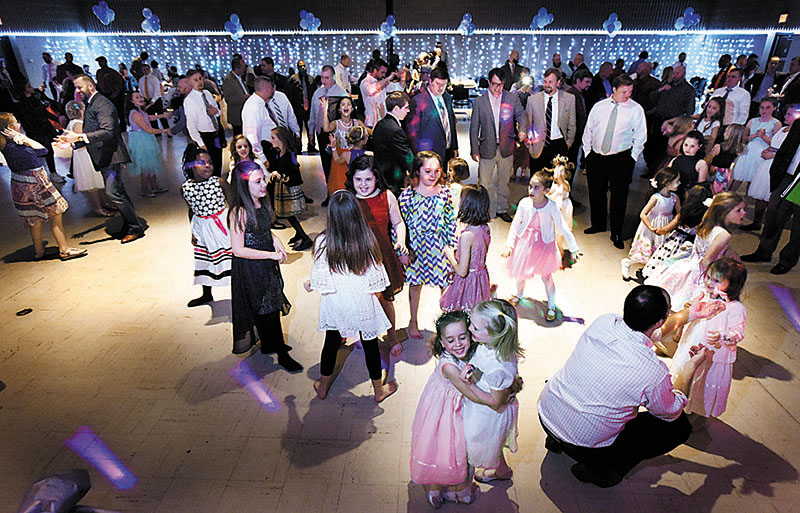 Some of the young girls dance down front under the spotlight while the fathers watch in back at the Father-Daughter Dance sponsored by the Salisbury Parks and Recreation Department. photo by Wayne Hinshaw, for the Salisbury Post

SALISBURY — “After next year, the only time I’ll be able to dance with her like this is at her wedding.”

Dickie Stoner and 12-year-old daughter Chloee were one of the numerous father-daughter couples who attended the 21st annual Father Daughter Dance last Saturday, organized by the Salisbury Parks and Recreation Department.

The dance is for fathers and the daughters from age 4 to 13. So for Chloee and her father Dickie, this was second to last year that they will be able to participate.

Dickie said the dance was one of the few times in the year that he could spend time with his daughter.

Chloee agreed. She said school and sports keep her busy, but the Father Daughter Dance lets her spend some alone time with her father.

The father-daughter pairs danced the night away at the Salisbury Civic Center. Vivian Koontz, special events coordinator, said they even sold leftover reserved sponsor tickets to the public, meaning the event was over sold-out.

The dance had a winter theme, with white and blue decorations and snowflakes hanging from the hallway ceilings. Along with dancing, the couples could also get their pictures taken and get creative in the arts and crafts room, run by the Girl Scouts.

The couples featured all kinds of father figures dancing with their daughters, including uncles, grandfathers, family friends and older brothers.

“We welcome that,” Koontz said.

Dickie and Chloee were part of a group of couples who grabbed dinner and attended the dance together.

Also part of that group was Adam Bouk and his daughter Alex. Alex said she enjoyed the dance because it was a night where she could hang out and dance with her friends. And being there with her father made it extra special.

“I think it’s just more fun with my dad because my dad’s awesome,” she said.

Adam said he was glad the city organized an event that brought fathers and daughters together.

“I think the father is one of the most important aspects of a daughter’s life,” he said.

Greg Beam and daughter Abbey were also part of that group. Greg said the event was safe and great for young girls.

Abbey said the dance meant a lot to her because her father is a police officer and she never knows what could happen to him out on the job.

“I like that I can spend time with my dad,” she said.

When the music slowed down, all the fathers were out on the floor to slow dance with their daughters.

There were door prizes announced every 20 minutes and a dance-off for the fathers at the end of the night. Vivian Koontz said they may add a daughter dance-off next year.

Dale Waters came to the dance with his 7-year-old daughter Daleiah. It was their fourth year attending, and Dale said Daleiah enjoyed having her father all to herself.

“(The dance is) a good opportunity for fathers and daughters to spend time together,” he said.

Charlie Dry and his 8-year-old daughter Jordan were also attending for the fourth time. Last year Jordan was a little upset that all the other girls were wearing corsages around their wrists, so this year she made sure her father got her one.

Charlie said he could see his daughter growing up every year they attended the event, so he was trying to take advantage of the time he has with Jordan.

“And it’s just special spending time with just us,” he said.