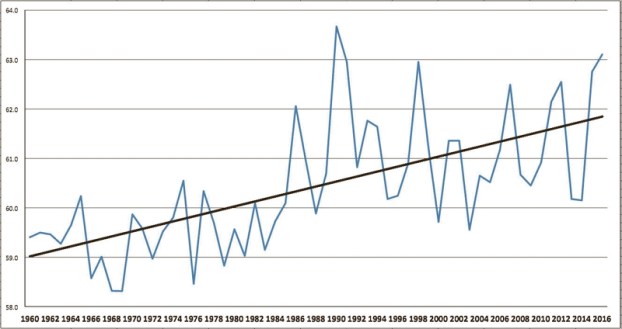 Francis Koster: This trend is going up and up

Pop Quiz: What does this graph show?

A. The growth in debt of the State of North Carolina

Worldwide, heat records were shattered in 2014, only be topped in 2015, and then to be topped again in 2016. Fifteen of the 16 warmest years on record have occurred since 2001. If this trend is not stopped, your family’s food supply and health will be at serious risk.

In recent years, scientists discovered that leaking natural gas from well fields and pipelines around the United States is a significant contributor to temperature rise.

In January 2015, President Obama put in place regulations to require the oil and gas companies to stop these natural gas leaks.

In January 2017, Congress voted to eliminate those regulations and allow the leaking to continue. The bill awaits President Trump’s signature.

Not everyone is unhappy that North Carolina is getting warmer in the winter — but the larger point is that such changes are occurring all over the earth. Rising temperatures are causing the largest iceberg in history to break off of Antarctica — the coldest region on earth. The part that will be dumped into the ocean is the size of the state of Delaware.

You can reduce natural gas leakage by wrapping your gas water heater with an insulation kit available at home improvement stores. Lowering the amount of natural gas that goes through the pipes to your home will lower the amount that leaks. A real win-win — you save money, and slow down climate change.

Francis P. Koster of Kannapolis is a member of the Society of Environmental Journalists and the Association of Health Care Journalists.