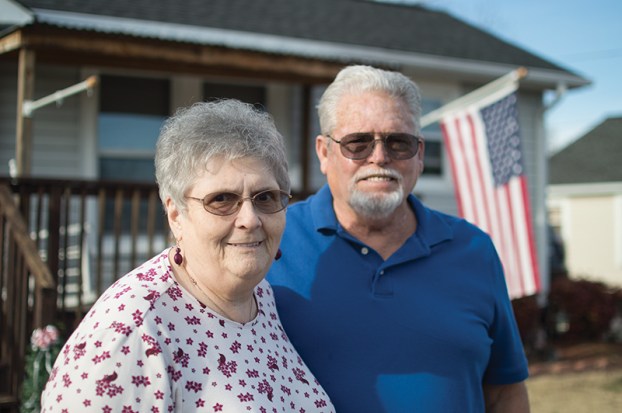 Barbara Greene and Charles Greene pose for a photo in front of their Kannapolis home. The couple have experienced difficulties with the VA's Choice Program and other care at the Salisbury VA. Josh Bergeron/ Salisbury Post Josh Bergeron / Salisbury Post – Photos of Kannapolis resident Charles Greene and memorabilia fill a frame. Greene has experienced difficulty with the VA’s Choice Program and other aspects of care at the Salisbury VA.

KANNAPOLIS — When one Vietnam veteran’s vision deteriorated after eye surgery, a decision to seek care outside of the W.G. “Bill” Hefner VA Medical Center created more problems that it solved.

Several months after cataract surgery, Kannapolis resident Charles Greene’s vision has only gotten worse. Stress associated with getting care for his eye worsened existing speech problems, said Greene’s wife, Barbara. The couple received notice of an appointment moments before it was scheduled. Meanwhile, the Veterans Health Administration’s Choice Program hasn’t paid for a visit to a private doctor months before the surgery, according to records obtained by the Salisbury Post.

Barbara, who worked to pre-approve people for Medicaid before her retirement, has a long list of complaints about Veterans Affairs facilities and the Choice Program. She summed it up in just a few sentences.

“They’re not timely. They’re not good about identifying themselves, and nobody seems to have a supervisor that you can speak with,” she said about Health Net, contracted to oversee the VA Choice Program. “The first time I talked with them, they tried to sell me car insurance.”

She describes the past several months as “a battle.”

“It’s not fair. He’s already fought for these privileges one time,” she said. “Why am I having to battle with everyone?”

Representatives of the Salisbury VA said they couldn’t comment on specific cases, but spoke generally about how the Choice Program functions at the W.G. “Bill” Hefner VA Medical Center.

Hoping to resolve the situation, the Greenes say they’ve reached out to the office of U.S. Rep. Richard Hudson, R-8. In an emailed statement, Hudson reiterated his belief that veterans should be able to receive care, without barriers, through private providers. Still, there are bureaucratic problems with the Department of Veterans Affairs, he said.

Hanging on the walls of the Greenes’ home are pictures and memorabilia from Charles’ Army days. Born in 1944, he entered the Army at the age of 20. He enlisted just before regular combat units started deploying to Vietnam.

A Cabarrus County native, Charles lived in Landis at the time of his entry into the U.S. Army. He previously worked in Cannon Mills’ Plant 4.

In Vietnam, Charles was a helicopter gunner. Barbara says he has never talked much about his experiences in the service. Now, health problems make it difficult for Charles to discuss his Vietnam days. He’s suffered two strokes and may have recently suffered a third stroke in his eye.

“A lot of his stuff was very, very secret,” Barbara said. “In fact, they sent back his mail. His mother went through the Red Cross just to find out if he was still alive.”

After enlisting for three years, Charles was honorably discharged in May 1967 at the rank of specialist five. His last duty assignment was to the First Battalion, C Battery of the 65th Artillery. After leaving the military, he worked as a mechanic in various capacities.

Barbara and Charles were engaged decades ago, but family matters prevented a marriage.

They reconnected in a way only possible in the 21st century — Facebook. Charles and Barbara sent messages back and forth. Eventually, Charles decided he’d visit her. At the time, Barbara lived in Clayton.

“I was afraid to ever be face-to-face with him again,” she said. “He drove up there and actually got there three hours too early. We got out of the car and he hugged me in the driveway, and I knew right then. I really did.”

Now, she’s Charles’ biggest advocate as they try to navigate the VA health care system and the Choice Program.

The Greenes’ VA-related issues bubbled to a boil in August 2016, when ophthalmology doctors performed cataract surgery on Charles’ left eye. Barbara said she’s still unsure why “the left eye met criteria and the right one did not.”

Previously, Charles’ vision was worse in the right eye. Now, it’s better than the one doctors operated on, Barbara said.

“They turned his best eye into his worst eye,” she said.

Days after the surgery, Charles had 20/30 vision. One month after the surgery, his vision had deteriorated significantly. Barbara said doctors told her a stitch that had been left in past its removal date may have contributed to the decrease in vision.

In November, doctors OK’d Charles for the VA Choice Program after the Greenes made a number of visits to the Salisbury VA for vision problems.

“It’s a ridiculous joke, the most ridiculous thing I have ever seen or heard of,” Barbara said about the Choice Program. “Again, I prior-approved people for a living for 15 years.”

When Barbara questioned why they hadn’t received notification about an appointment, the person on the other end — a Health Net representative — abruptly hung up the phone, she said.

“I was livid,” Barbara said.

She called Charlotte Eye, Ear, Nose and Throat to schedule an appointment without going through the VA. As she scheduled the appointment, Barbara said, she knew it wouldn’t be covered by the Choice Program because of payment problems. In June, Charles was approved through the Choice Program to see doctors at Charlotte Eye, Ear, Nose and Throat, but when the Greenes arrived for the appointment, Health Net hadn’t faxed the necessary documents to the office, Barbara said. As of Dec. 27, the Choice Program still hasn’t paid for the June visit, according to records obtained by the Salisbury Post.

Nearly a month after Charles’ most recent referral to the Choice Program, a letter with an appointment date finally arrived. The Greenes, however, received the letter just five minutes before the appointment time. The Health Net letter is dated Dec. 14 with an appointment scheduled for Dec. 20.

When a private doctor recently reviewed Charles’ records, he found an area of dead tissue in the eye where surgery was performed months earlier, according to records obtained by the Salisbury Post. Barbara said she was told Charles had a stroke in his retina.

Angela Gilley, the chief of non-VA care for the Salisbury VA, said she was unable to talk about specific cases. However, she talked at length about the process veterans go through as part of the Choice Program.

Generally, there are two separate processes, Gilley said. One applies to veterans who can’t be seen within 30 days. The other applies to patients who need care VA facilities can’t provide.

Regardless of the service, veterans can also seek care through the Choice Program if they live more than 40 miles from a VA facility.

During the last 90 days, 3,829 area veterans have used the Choice Program, according to statistics provided by the Salisbury VA.

Once the paperwork leaves the Salisbury VA, Health Net takes on a number of other responsibilities, including handling payment for appointments.

It’s at that point — when Health Net takes ownership of the case — where Army veteran Rodney Cress suspects the problems begin. Cress, a veterans advocate who has received awards for his work, was recently referred to the Choice Program for a neurology appointment. After waiting 30 days, Cress said he called to find out the status of his appointment.

“I just called last week and said, ‘What’s going on with my VA Choice? Salisbury said they sent it to you the day I was up there,” Cress said, recalling a phone call with Health Net. “The lady just plainly said, ‘Yeah, I see nobody has called you.’ I mean, just like it was no big deal. She said, ‘Let me start working on it.'”

The Choice Program was created in 2014 in response to wait-time scandals. The program allowed veterans who lived more than 40 miles away from VA facilities to seek care at private providers. In 2015, the VA expanded the program to include veterans who can’t be seen within 30 days. However, Cress waited longer than the 30-day threshold just to learn that no one had started working on his appointment.

Still, Cress says the program has its merits.

“I think it has a lot of support, but I also think the VA doesn’t want it to succeed,” Cress said.

Since the Choice Program started, patient access data show the Hefner VA Medical Center’s wait times are relatively similar or slightly worse. In December 2014, for example, about 95 percent of appointments at the VA hospital in Salisbury were completed within 30 days. In December 2016, that same statistic had decreased to 93.68 percent.

Gilley listed a few ways the Salisbury VA has tried to improve the quality and speed of care for veterans who use the Choice Program. One such improvement included increased staffing levels.

Like Cress, two of the area’s members of Congress — Hudson and Sen. Thom Tillis, both Republicans — believe the Choice Program provides relief to veterans seeking health care. However, both men have proposed changes to the program.

Last year, Tillis proposed changes that would allow veterans to visit a private clinic without pre-authorization — the process that frustrated the Greenes and delayed Cress from receiving care. In an interview last week, Tillis said the Choice Program was well-intentioned, but it still involves “the bureaucracy of the VA.”

In some cases, veterans referred to the Choice Program are waiting long periods of time for care that can’t be provided by the VA.

“As I’ve said before, the only way we’re going to get veterans the quality and timely care they deserve is to break that bureaucratic stronghold,” Hudson said in an emailed statement. “The first step to do that is allowing veterans the option of seeking private care in their own communities and having the VA pay for it.”

Sure, you’ve seen polls that show President Donald Trump’s approval rating, but how do the commander in chief’s numbers compare... read more