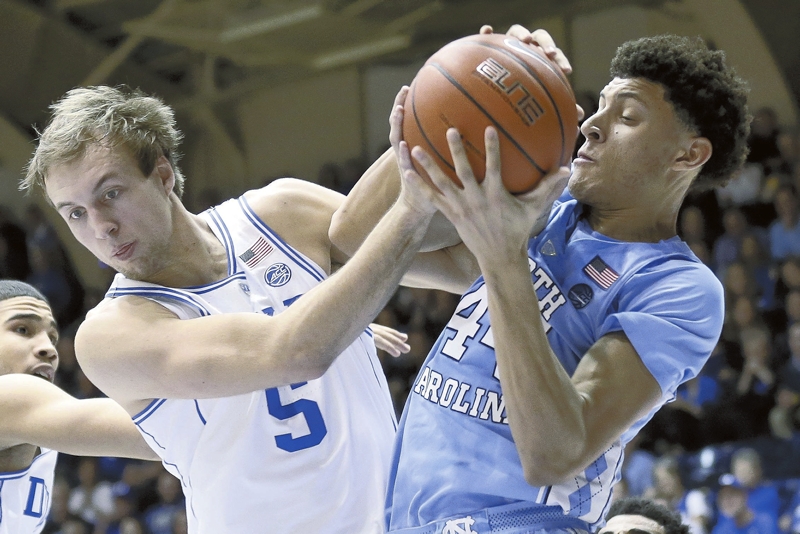 DURHAM (AP) — The Atlantic Coast Conference has spent the season regularly putting the most teams in the AP Top 25 and touting itself as the nation’s deepest conference.

Now those teams are jostling for the ACC crown with three weeks left in the regular season.

Eighth-ranked North Carolina is still within reach of a second straight regular-season title, though its loss at rival Duke on Thursday night cost the Tar Heels sole possession of first place. They’re tied with No. 14 Florida State, while the 18th-ranked Blue Devils, No. 4 Louisville, No. 12 Virginia, Syracuse and Notre Dame lurk nearby.

“Our goal is intact,” UNC junior Theo Pinson said. “We’re still up there. We’ve got a chance to still win it, but we’ve got to take care of ourselves and win games — bottom line. Win games, and you don’t have to worry about anything.”

In all, the top seven teams in the 15-team league are within two games of one another entering the weekend. And the race isn’t solely about winning the regular-season title; it’s also about securing a top-four seed for next month’s ACC Tournament and the double-round bye that comes with it.

But Florida State — which won the ACC Tournament in 2012 but has never won the regular-season crown — has already emerged from the toughest part of its schedule, going 5-1 in a stretch of six straight games against ranked teams. The Seminoles play at Notre Dame on Saturday and at Duke on Feb. 28, but three of their final six games come against teams sitting in 12th or worse in the standings.

Four of FSU’s last six games are on the road.

“There’s no doubt that this going to be a challenge,” FSU coach Leonard Hamilton said. “We have to be smart in our preparation. This is crunch time for all of us.”

The Tar Heels, meanwhile, still have two games against Virginia, a home game against Louisville (Feb. 22) and a home finale against Duke (March 4).

The Blue Devils were the nation’s preseason No. 1 only to stumble amid a drama-filled first two months of the season. Hall of Fame coach Mike Krzyzewski missed a month as he recovered from back surgery, part of a series of ailments that plagued the Blue Devils early on. There was also Grayson Allen’s suspension for a third tripping incident in a year, which has made his every oncourt move a subject of frame-by-frame scrutiny.

Yet Allen broke out with 25 points in Thursday’s 86-78 win against the Tar Heels, the Blue Devils’ fourth straight win and a sign that they might have steadied a once-wobbly ship. Duke gets a quick turnaround and hosts Clemson on Saturday to go with remaining games against FSU, at Virginia, at Syracuse and at UNC.

“It’s all about how we respond after this,” Allen said, “because it was a huge win and the atmosphere around the game was huge and so how we respond is going to be big, so I’m looking forward to it.”

The other key matchups will be a pair of games between the Cardinals and Orange, who has climbed the league standings with a 6-0 record in league games at the Carrier Dome.

“Because everybody’s capable of knocking each other off in this league, I said, ‘Every game, you’re playing for your basketball season,’” Virginia coach Tony Bennett said. “I tell them that not to make them feel tense. I say it because it’s a privilege. … Now we’re getting to the second half and every game has major significance for a lot of reasons. Embrace that, appreciate it, and play that way and then we’ll pick up no matter what happens.”