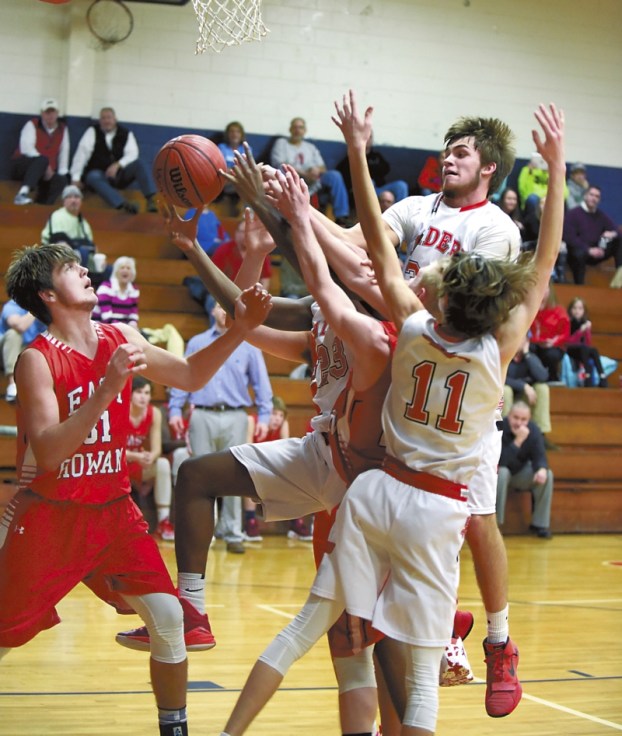 File photo from the first meeting between the two teams: East's Paiton File 31 and South's Tyrese Shaver 23, Garrett Harrington 32, and Dillion Klutz 11. photo by Wayne Hinshaw, for the Salisbury Post

“Relief is the first word that comes to mind,” coach Andre McCain said after South prevailed in a 64-60 test-of-nerves. “We finally got that monkey off our back. Now it’s time to build for next year.”

“It’s amazing to end with a good one,” junior guard Bailey Graham said after scoring 15 second-half points, including eight in overtime. “We went out there and tried to forget all those losses and just start new.”

Both the Raiders — who switch to Class 2A next season — and East (4-20, 2-16) failed to qualify for next week’s conference tournament. That explained both squad’s all-or-nothing mindset as the game unspooled.

“I’m happy for South Rowan. They get their first win,” said Mustangs coach Kurt Misenheimer. “But I hate it had to be against us. I didn’t like the outcome, but there were a lot of things we could have done to change it.”

Instead, it was South that rose to the occasion and treated its Senior Night crowd to a fabulous finish. It was Graham’s short-range floater that broke a 57-57 tie with 2:05 remaining in the second OT. Then Harrington — a 6-foot-5 junior — hit back-to-back layups to stretch the lead to six with 46 seconds to play.

“We all played our hearts out,” Harrington said. “We gave it everything we had when it counted most.”

East had a chance to extend the game but missed three 3-pointers in the final minute. The Mustangs, who dressed only eight players and used only seven, were critically shorthanded by then. Senior Lucas Morton, the team’s leading scorer, wasn’t in uniform and 6-4 freshman Brandon Jefferson fouled out with 3:22 to go.

“That hurt us,” said Misenheimer. “A lot of other guys had to pick up the load. Our other two seniors, Ellis Taylor and Paiton File, picked up a lot of it. But hats off to South. Both teams played hard. They just made some bigger plays down the stretch.”

Perhaps the biggest came when South’s Dillon Kluttz sent a long, downcourt pass to Harrington for a bang-bang layup that made it 63-57.

“They timed it up perfectly,” Graham said. “After that it scared me every single time they were pulling up for shots.”

South couldn’t relax until File air-balled a 3-point attempt with 12 seconds to go. When the final horn sounded, clip boards were tossed in the air and jubilant fans swarmed the court.

“To be honest, I’ve lost count of how many losses we’ve had,” McCain said outside the lively South locker room. “I just told the guys to keep playing and not worry about the records and all that deal. This right here, it’s not for me. It’s for the guys. It’s their reward for working hard, even when it would have been easy not to.”