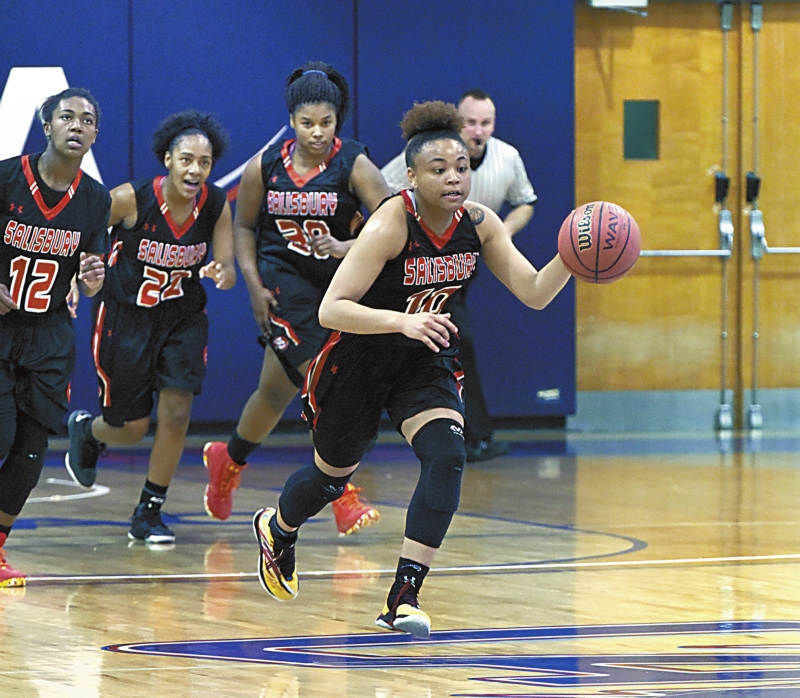 SALISBURY — What do you work on when you’ve already clinched the Central Carolina Conference championship, you’re ranked third in 2A, and you’ve got a nice winning streak?

Well, if you’re the Salisbury girls, you work on defense. Salisbury held North Rowan without a field goal in the first half on Friday at Catawba’s Goodman Gym and romped, 54-10.

“It’s not like we’re looking past anyone, but we are trying to prepare for the playoffs, for what’s waiting ahead of us,” Salisbury coach Lakai Brice said. “Our focus lately has been on defense, especially man-to-man defense. If we’re going to do anything in the playoffs, we’ve got to be able to play good man-to-man.”

It was 36-1 at halftime and 54-3 after three quarters. The game was played with a running clock after the Hornets went ahead 44-3 on a Bryanna Troutman bucket midway through the third quarter.

For what it’s worth, North won the fourth quarter, 7-0.

The Hornet who had the most challenging defensive assignment was Mystjkal Phifer. She started the game guarding Brianna White, North’s leading scorer.

“Brianna White is a great athlete,” Brice said. “But Mystjkal did a pretty good job on her.”

When North’s Tajah Oglesby drove the baseline and flipped in a floater to cut Salisbury’s lead to 40-3, fans on both sides of the bleachers felt like cheering. It was that one-sided.

“I don’t really even want to comment,” North coach Ron Bost said. “Salisbury plays very hard. Give them credit for playing very hard. We’ve been winning some games lately, but the teams we’ve been beating haven’t been like Salisbury.”

North actually had won three of its last five CCC outings and had lost by 11 recently to second-place East Davidson. North had also finished strong in an 18-point loss to Salisbury earlier this season.

But this one got out of hand in a hurry.

Salisbury got 18 points from Troutman, 14 from Anayia Fulson and 12 from Tyzarea Alexander. Maria Capito had a couple of 3-pointers in the first half as the Hornets blew it open.

“We got a lot of transition points,” Brice said. “That’s something we’re always looking for.”

There’s not really a halftime speech for when you’re leading, 36-1. Brice did her best.

“You can’t stop playing,” she said. “And we did good job of making passes and continuing to execute.”