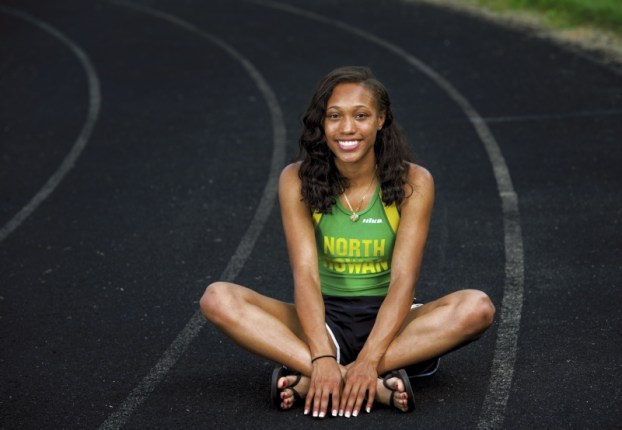 North Rowan senior Payton Russell finally claimed her first indoor track state championship on Friday, blazing to victory in the 300 meters in a personal record of 40.29 seconds at the JDL Fast Track in Winston-Salem.

“It felt really great,” Russell said. “It was kind of a long time coming.”

This was Russell’s fifth state title overall. She already is a two-time 1A/2A state outdoor champion in the 400 meters, her specialty, and she’s also won outdoor titles in the 200 and 4×400 relay.

Russell placed second in the 300 as a freshman and sophomore, both times finishing behind Elkin’s Shakai Ward. Both years, Russell ran a shade over 42 seconds.

Russell was unable to compete in the indoor championships as a junior due to a hamstring injury.

But Friday’s victory made all the waiting and all the training worthwhile.

“It’s just amazing to see all the time and work I put in pay off with a championship,” Russell said. “You work all that time for 40 seconds, and you want to be at your best.”

Russell only competed in the 300, although she likely could also have challenged in the 500.

“We just decided there wasn’t enough recovery time between the two races,” Russell said. “We didn’t want to take a chance of injury. The good thing was that my workout partner (West Montgomery junior Araybian Lilly) set a record and won the 500.”

Russell often competes in four sprint events in the same day, so Friday’s state meet, with just one event, was almost a vacation.

Russell expressed pride in teammate Heavenly Robinson, who ran 43.10 in the 300 and earned a point for an eighth-place finish.

North Brunswick dominated the boys meet, while the High Point Andrews women held off a  charge from defending champ Burlington Cummings to win the girls title.