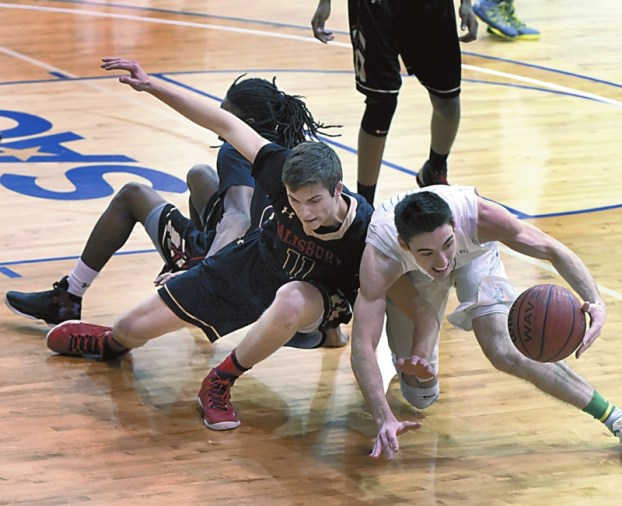 Wayne Hinshaw/for the Salisbury Post
North Rowan’s Chaz McCombs (24) tries to get a hand on a layup by Salisbury’s Oshaun Robinson (20), during Friday night’s game at Goodman Gym.

All that extra shooting paid off. The end of Salisbury’s long losing streak to North Rowan can be traced directly to Baker’s clutch foul shooting at the end of Friday’s 54-50 victory.

“I just had to take my time,” Baker said. “Free throws are all about taking your time.”

Salisbury took its time beating North Rowan, but it finally ended a 12-game skid on Friday against its neighbor and arch-rival in the Central Carolina Conference. The teams tied for second in the league. Salisbury, by draw, won the No. 2 seed and a first-round bye for next week’s CCC tournament.

“(Salisbury senior) Tre Oats came by my classroom today and talked to me about how they’d never beaten North Rowan,” Salisbury coach Bryan Withers said. “I feel good right now, and believe me, I wanted to win — but mostly, I’m happy for our kids. They really needed this. They needed to get one against North, no matter what the circumstances were, and they got it.”

It was a strange win on the big floor at Catawba’s Goodman Gym. Salisbury made one field goal in the second half — yes, one — but a 20-point halftime bulge and a lot of free throws were enough.

North played without senior star Joe Scott, who had destroyed the Hornets with 32 points in the first meeting. Scott missed the game with a painful injury that North coach Andrew Mitchell described as “turf toe.”

“We prepared all week to deal with Joe and Henderson Lentz,” Baker said. “We didn’t find out Joe wasn’t going to play until shortly before the game.”

Lentz would score 25 for the Cavaliers, but for Lentz, an unbelievable shooter, it wasn’t a great 25. Salisbury ran waves of defenders at him — Oshaun Robinson, Cameron Gill, Baker and Zadrian Harris — and he took a lot more shots and missed a lot more shots than usual.

Lentz was very good, but without Scott, the Cavaliers weren’t going to win unless he was great.

Other than Baker, the junior point guard, the key man for Salisbury was Harris, a 6-foot-5 senior.

Harris is up and down, but when he’s up, when he’s aggressive and attacking, he can be devastating. The reigning Rowan County high jump champ, he got the Hornets going, soaring and pounding the glass for stick-backs. He skied for a dunk attempt. He got fouled, so he was unsuccessful, but he sent the message that he’d come to play.

“It was just time for us to beat them,” said Harris, who had 16 points and eight rebounds.  “We all got tired of losing to North Rowan.”

Then the Hornets smashed North in the second quarter, getting 3-pointers from Baker and Will Leckonby and getting scoring from eight players. By halftime, the Hornets were in command, 39-19.

Mitchell rallied his troops at halftime. North got it to Lentz even more after the break, and he got help from Brevin Goodlett, Dayjuwon Cooke and Nakis Miller. North began the long climb back. After three quarters, the Hornets’ lead had been sliced to 46-37.

“Joe wanted to play, but we weren’t going to risk his future by playing him, and then we got off to a very rough start,” Mitchell said. “But once we settled down a little bit, we were able to start executing. So proud of our guys for fighting back and giving us a chance.”

Salisbury’s final field goal of the evening came early in the third quarter when the 6-foot-6 Oats got an easy one off an inbounds lob. The Hornets wouldn’t make a field goal the last 14 minutes.

“North did a lot of good stuff in the second half to get back in it,” Withers said. “We didn’t see our bigs when they were open, we missed open 3s that we usually make and we made unforced turnovers.”

When Cooke followed a Lentz miss for a  three-point play, making the bucket while falling flat on his back, the Cavaliers were down, 46-43, with 5:14 remaining.

The Hornets were hanging on for dear life, but Baker stayed poised, cutting, dribbling, passing, taking time off the clock. And, occasionally, the Hornets would make a free throw.

“I had to keep the game under control,” Baker said.

When Lentz swooped in for a gliding banker with 54 seconds left, the Hornets led, 49-46.

Baker pushed the lead back to 50-46 when he split two free throws with 49 seconds left.

A pivotal whistle came with 33 seconds left, an illegal screen call, when the Cavaliers had popped Lentz free for a wide-open 3-point look from in front of the North bench.

Baker missed two free throws. Then Lentz made one of two. Salisbury’s lead was 50-47 with 23 seconds left.

Again, North fouled Baker, but this time he was money. Two swishes. The Hornets led 52-47.

With 15 seconds on the clock, Lentz buried a long 3-pointer, hand in his face, and North was within 52-50. That was the fourth 3-pointer for Lentz.

But then Baker iced it. He made his final two free throws with 13 seconds left for 54-50. Both were clean.

Then Lentz fired and missed — over good defense by Gill — with four seconds left, and the Hornets had survived.

Baker, who had five assists and only two turnovers while handling the ball most of the time,  joined Harris in a post-game celebration. They laughed, danced and pointed at celebrating Salisbury fans before making their way to the locker room with a memorable streak-breaker.

The teams likely will meet in the CCC tournament semifinals next week to see who gets another shot at Thomasville, but that’s in the future. The present belongs to the Hornets.