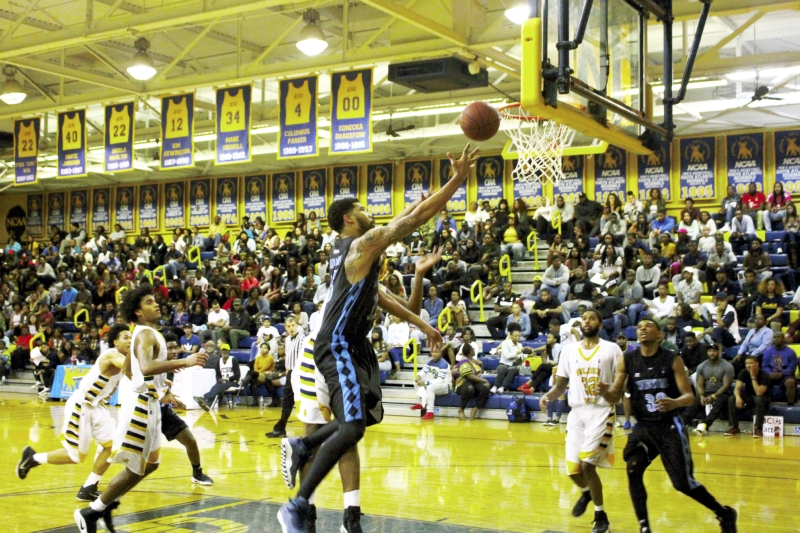 The win keeps the Blue Bears in the hunt for second place in the CIAA’s Southern Division. Shaw leads the division at 8-6 while Livingstone, Winston-Salem State, Fayetteville State and J.C. Smith are all 6-8.

The Blue Bears are 9-15 overall and at 5-3 in the division, currently hold the tie-breaker for second place. J.C. Smith is 10-14 overall.

Post player David Duncan had a big game for Livingstone with 14 points and 13 rebounds. Guards Roger Ray and Ramel Belfield came off the bench to add a spark to the offense, scoring 17 and 16 points, respectively.

Also scoring in double figures for the Blue Bears were forward Jimmy Wilson with 12 points and guard Samuel McClendon with 10.

Leading, 38-34, at halftime, Livingstone quickly established itself in the second half. Behind baskets from Duncan and Darryl Bond, a 3-pointer from Rodney Clowney, and free throws from Wilson and McClendon, the Blue Bears opened the second 20 minutes on a 13-2 run — and a 51-36 lead.

Coach James Stinson’s Blue Bears held a comfortable lead until the Golden Bulls whittled their deficit down to 67-62, when Christian Kirchman drilled a 3-pointer at the 6:15-mark.

Livingstone responded with a layup from Duncan and 3-pointer from Belfield and the margin was back to 10 points at 72-62, with 4:26 remaining.

JCSU was able to chop the deficit down to five points two more times, but Ray went 6-for-6 at the foul line down the stretch and McClendon also dropped in two free throws, his tosses coming with 44 seconds left and the lead at 80-75.

Ray made the last two fouls shots for the final margin with 11 seconds left on the clock.

Livingstone out-rebounded the Bulls, 49-40, and Wilson had 10 boards, following Duncan’s 13.

Livingstone has two games remaining in the regular season — both at home this week. The Blue Bears host St. Augustine’s on Wednesday at 7:30 and Winston-Salem State on Saturday at 4 p.m.

NOTES: The Blue Bears also defeated JCSU in Salisbury on Jan. 21, 68-67, on a layup by Ray with three seconds left. … Belfield was 6-for-11 from the floor, including 4-for-8 from behind the 3-point arc. … Former North Rowan standout Malik Ford started for the Bulls, playing 16 minutes and scoring four points. … Wednesday’s game will be Stinson’s 800th as a head coach. He has coached at Livingstone and Barber-Scotia, compiling a record of 458-341.