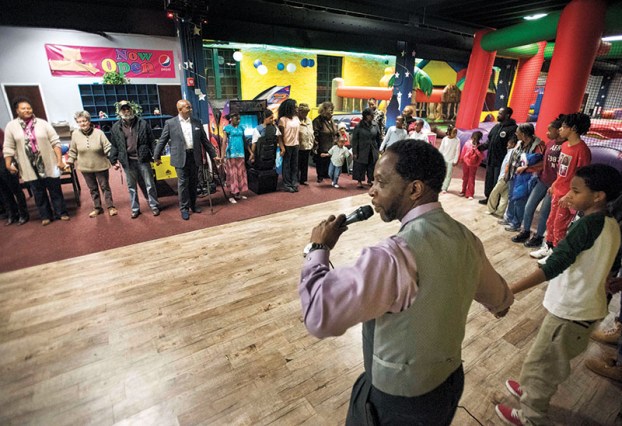 JON C. LAKEY / SALISBURY POST Pastor Timothy Bates leads those gathered in a prayer. A Heal the Community event was held at Bounce City on North Church Street on Friday evening. The names of the victims of unsolved murders were mentioned and then a balloon release was held in memory for those victims.

Healing the Community: Family, residents gather to remember those killed in Salisbury

SALISBURY — Danielle Robinson tried to wipe away the tears that streamed down her cheeks, but each time they were followed by fresh ones. She was surrounded by her children and other family as the loss of her fiance and their father, Reggie Burke, became fresh again.

Robinson also was surrounded by community leaders, pastors and strangers all with one purpose — to remind her they had not forgotten Burke.

The modest gathering Friday night highlighted the 17 unsolved murders in Salisbury. But it also was a way to remember those whose murders have been solved.

Burke, 30, was shot and killed July 29 outside the Zion Hills Apartment complex. His death is among the 17 unsolved cases.

The Healing the Community gathering was the first of its kind in which the families of those killed had the opportunity to publicly mourn the deaths and celebrate the lives together with others.

The event was organized by Rowan Salisbury Women Community Action Committee, in partnership with Great Men and Women United and supported by other groups including Women for Police &  Community Peace and Women in Progress.

Organizers placed the names of those killed on a wall as a visible reminder of the homicides.

Pastor Anthony Smith of Mission House read each name aloud, including those whose murders have been solved and possibly some who may not have been on the minds of some in light of recent violence.

Among those names was that of Rico Baker, who was shot and killed in 2009 outside an East Cemetery Street home. Robinson said Baker is her children’s uncle. She noted that some of the others named had been classmates.

She wore a red T-shirt in memory of Reggie Burke with pictures of him on the front.

Each family member or friend was asked to take a balloon, and the group gathered outside shortly after day turned to night.

After a countdown, the balloons were slowly released into the air, but by circumstance most of the balloons became lodged in a nearby tree.

Pastor Smith suggested that the balloons were not moving on as a symbol that justice had not been served for those killed.

Retired Charlotte-Mecklenburg Police homicide detective Garry McFadden spoke to those gathered and took questions about how the community can be proactive and how the residents should hold law enforcement and each other accountable.

McFadden challenged parents and community leaders to know what resources they can tap to educate themselves and youths about how they should interact with law enforcement.

“We have violence in our community, but do we really address the problem?” McFadden asked.

McFadden said whatever the community leaders are doing they need to do more in order to not see more names on a victims’ wall.

“The time for sitting is over,” declared Jehan Davis.

Davis and her husband, Guanah, own Bounce City, where Friday’s gathering was held. They said they would love to facilitate similar events.

“This town is too small to have 17 unsolved murders,” Jehan Davis said.

She spoke directly to the families, saying the organizers and the community love and support them.

One organizer, Chariel Dye, said McFadden gave them something to think about as well as a path and direction to go next.

April Woodberry, the maternal grandmother of 7-year-old A’yanna Allen, the youngest of those killed, said she is appreciative of the continued support from the community.

“I ask they continue praying for my family as we seek justice for A’yanna,” Woodberry said.

She said her family just this week discovered through an autopsy report that A’yanna was shot about 20 times. The young girl was killed Dec. 4 while she slept over at her paternal grandmother’s Harrel Street home.

Hours before A’yanna Allen was killed, someone shot Sharod Raheen Mathis, 22, outside Firewater Lounge and Restaurant after an altercation there. He later died at the hospital.

Although Renee Blakeney did not lose a son or daughter, she did attend to support the mother of Larry “Turtle” Lamar Cruse, who was killed in May. Cruse, 27, was shot while inside his vehicle on North Martin Luther King Jr. Avenue. He crashed the vehicle into a nearby fence.

Blakeney’s son and Cruse used to attend school together when they were young. She said it’s not all the Police Department’s fault that the murders are not solved.

“Somebody should know something,” she said. “It’s not just left up to the police.”