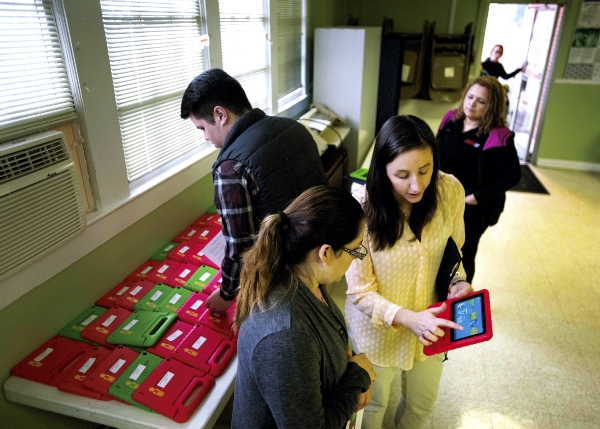 Appleseed program intern Kristen Harman explains the basics to parents that were receiving a new reader. Marisol Ruiz (left) gets a look at the new reader. Parents of the children at the Westside Head Start on Harry Street in China Grove received 53 Kindle Fire tablets with shock-proof casse to take home for their young pre-schoolers. Jon C. Lakey/Salisbury Post

A bold experiment going on in Rowan County could have implications for early childhood learning in a much broader area.

It’s called the Appleseed Project, created by Greg and Missie Alcorn of Salisbury as a way to improve the lives of children in need. Some 65 percent of Rowan-Salisbury Schools’ youngest students are not ready for kindergarten. They start off far behind peers who have more advantages — and bigger vocabularies.

“And that never changes, they never catch up,” Greg Alcorn told a Post reporter last year. The gap affects their grades, their career and their future. “It ain’t fair,” Alcorn said, “so let’s make it fair. Let’s make it an even playing field.”

After a successful trial run involving 60 specially outfitted Kindles last year, Alcorn and crew recently distributed more than 500 Kindles to preschoolers in local Head Start programs. The electronic devices are loaded with programs targeting early literacy skills. The Kindles cannot be used to go on the internet or load other games. They are strictly for Appleseed, and they have nearly indestructible covers.

Feedback from the eight Head Starts so far is inspiring, according to Alcorn.

“Language improvements, increased social interaction, better motor skills, assigning apps for homework, geez, it’s terrific!” he said in an email to people who have been following Appleseed’s progress.   “We’re refining our research process with professional direction …. The texting of a link for survey questions is working nicely and saves time and money. Parents like it, too.”

Appleseed shows creativity, initiative and generosity. The Alcorns, successful entrepreneurs, started Appleseed with their own money. But fundraising is under way, because this program is primed  growth. Greg says the dream is to have enough research and money to roll out readers to all Rowan County children in need, from birth through age 4. If that succeeds, other communities will want Appleseed — a far more effective remedy than any kind of cash benefit. Give a man a fish, and you feed him for a day, the old proverb says. Teach a child to read, and the possibilities are endless.

Other Voices: The class size conundrum

A few weeks ago, we called on state lawmakers to fix a well-meaning mandate to reduce class sizes in primary... read more