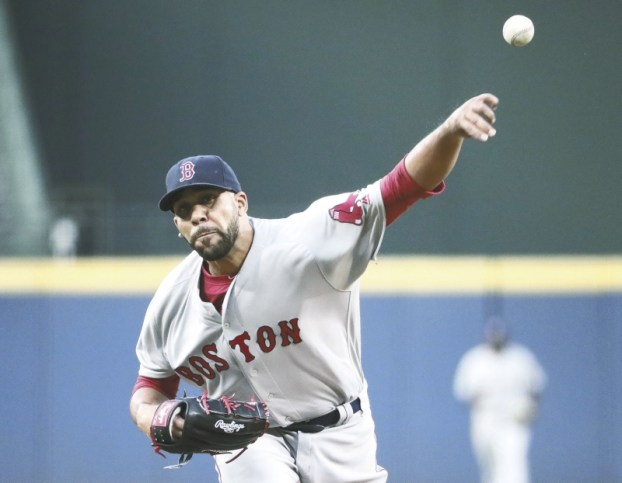 With David Ortiz retired, Boston Red Sox look to others

For the first time since 2003, the Boston Red Sox will enter spring training without David Ortiz.

The slugger retired after last season, taking with him three World Series rings, one Series MVP and numerous clutch moments in his 14 seasons with the club.

With Ortiz gone, the Red Sox enter 2017 with a big prize that president of baseball operations Dave Dombrowski acquired during the offseason — landing left-hander Chris Sale from the Chicago White Sox in a trade for four prospects.

“This gives us a significant chance to win,” Dombrowski said. “You never can tell what happens if, first of all, you can make it to the postseason and, if you get there, do you progress from there. We did not last year. I think it gives us the best chance to do that.”

The Red Sox captured the AL East title in 2016, but were swept in three games in the divisional round by the Cleveland Indians.

Some other things to know before pitchers and catchers report next week:

NEW LOOK: Besides Sale, Boston signed left-handed hitting 1B Mitch Moreland to a $5.5-million, one-year contract. Though his numbers very, very likely won’t make up for Ortiz (.315, 38 HRs, 127 RBIs), he should add depth and solid defense in place of Hanley Ramirez, who is expected to slide from first to the DH slot vacated by Ortiz’s departure. Moreland won his first career Gold Glove last season, playing with Texas.

ROOKIES TO WATCH: OF Andrew Benintendi came up late last season and gave the club a spark. Playing nearly every day in left field, he hit .295 with two homers and 14 RBIs in 34 games with speed on the bases and defense despite a stint on the disabled list with a knee injury.

First baseman Sam Travis won’t likely make the club this spring. But with the minor-league pool of prospects diminished after Dombrowski unloaded a number to land Sale and Thornburg, the 23-year-old will have a chance to get noticed if a spot opens up this season. He’s hit .303 in the minors.

THEY’RE SET: The lineup looks deep from top to bottom. Benintendi or CF Jackie Bradley Jr. and veteran 2B Dustin Pedroia should be solid table-setters in front of OF Mookie Betts, who was the runner-up for AL MVP behind Anaheim’s Mike Trout with a .318 average, 31 homers and 113 RBIs.

Ramirez looked very comfortable in his second season with the Red Sox, batting .286 with 30 HRs and 111 RBIs.

THEY’RE NOT: The one big question: Is 3B Pablo Sandoval ready to return to the form that enticed the club to sign him to a $95-million, five-year contract before 2015? He entered last spring noticeably heavier, but early reports are that he’s in much better shape after his 2016 was cut short by left shoulder surgery.