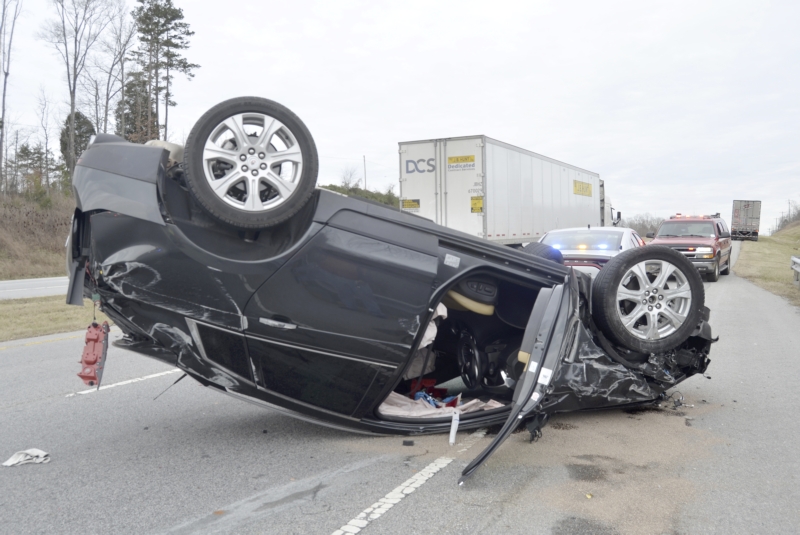 N.C. Highway Patrol troopers say Mary Summers, the driver of this Cadillac, was clipped by a tractor trailer on the rear side of her vehicle and then hit from behind by another tractor trailer, shown on the far right, while traveling west on Statesville Boulevard. The crash occurred Friday not far from the entrance of the former Magna Composites. Shavonne Walker/Salisbury Post

SALISBURY — A Statesville woman received minor injuries Friday after her Cadillac was struck by two tractor-trailers while traveling in the 6700 block of Statesville Boulevard. N.C. Highway Patrol troopers say her vehicle also overturned during the crash.

Trooper C.F. Rogers said Conway tractor-trailer driver Kwame Anane, 67, of El Paso, Texas, was in the middle of the roadway, closest to the left hand turn lane and was preparing to back up when he clipped the Cadillac, which was driven by Mary Summers.

Summers, 60, was traveling west on Statesville Boulevard, near Parks Road and across from the entrance of the former Magna Composites.

The trooper said Anane clipped the rear of the Cadillac. A second tractor-trailer with Heartland Express driven by Stanley Pinkston, 52, of Salisbury, was traveling behind the Cadillac and tried to stop, but was unable to do so, Trooper Rogers said.

The second tractor-trailer struck the Cadillac in the rear, causing it to come off the ground and overturn. Summers was wearing her seat belt and the airbags in her vehicle did deploy. The only significant injury she received was when she bit her lip.

Cleveland Fire Chief Kenny Payne said the initial call was that there was a traffic accident with someone pinned inside the vehicle, but when fire personnel arrived to the scene the woman was being assisted by Rowan County EMS.

Once it was learned that Summers was already free of her vehicle, Payne said, the crash was moved up to mutual aid with the Woodleaf Fire Department. Fire personnel also checked to make sure there was no fuel or other potential hazardous material spills from any of the vehicles into nearby Second Creek.

Both tractor-trailers were empty and there was no spill, Payne said.

Summers was the only person in the vehicle and neither tractor-trailer driver was injured.