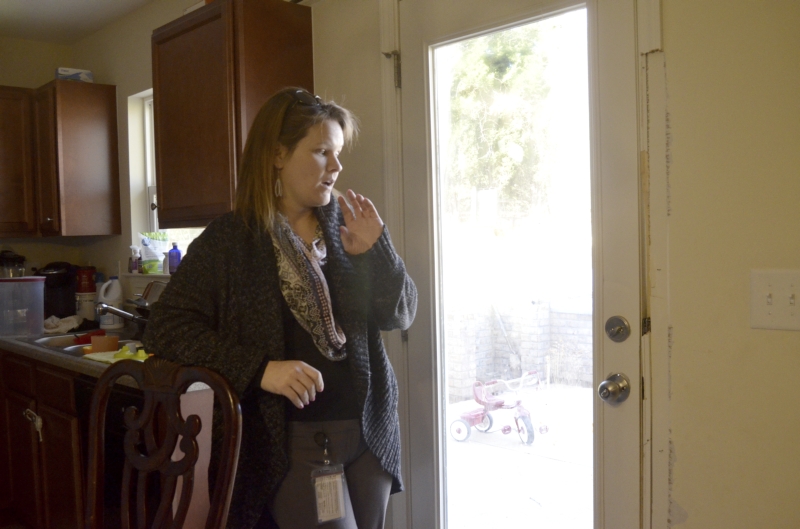 Susan Tovar talks about the back door that burglars kicked in Wednesday night right before taking her purse, Playstation 4 and other items. She credits changing a to a longer screw in the deadbolt latch to saving her family. The burglars repeatedly kicked the door, which awakened Tovar. She called 911 and one of the two suspects involved has been charged. Shavonne Walker/Salisbury Post

SALISBURY — Susan Tovar and her three children were fast asleep Wednesday until she heard a loud noise downstairs. Tovar quickly realized that someone was kicking in her back door.

She jumped up about 9:30 p.m. and dialed 911. Tovar could hear the burglar repeatedly kicking the door and stayed on the line until Salisbury police arrived.

When officers announced themselves, they say someone dashed out the front door. A second suspect had been upstairs where Tovar and her children were. The burglars tracked red mud from the backyard throughout the Woodbridge Drive home.

Tracks upstairs show where the intruders walked into the bedroom that Tovar shares with her husband, Victor, and their 2-year-old. Other muddy tracks were in the room of the Tovars’ 11-year-old daughter.

Susan Tovar said she had quickly run to her son’s room at the front of the house to see if the suspects had left. Police say that one suspect ran out the front door and down nearby Askin Lane.

Police found one suspect in nearby woods.

The Tovars moved to Corbin Acres, where there are a number of newly built homes, 11 months ago. A few months after moving in, they made one important change to the home that Susan Tovar credits with saving her family members’ lives two nights ago — upgrading screws.

She saw a report on WBTV about changing standard screws in a door frame to larger 3-inch screws that go farther into the stud at the latch plate. She found some screws among her husband’s tools, and they replaced them.

The screws made kicking in the door a much harder job, thus allowing Tovar to hear the burglars before they actually got into the house.

Once inside, police say the thieves moved a large TV stand away from a wall and began unplugging electronic equipment, including a PlayStation 4 game console and controllers, speakers, and the TV. The suspects did not take the television, but Tovar believes they would have, given time.

The suspects used her son’s backpack to put stolen items in. They also took an iPad and a tablet computer. Tovar said she usually does not leave her purse downstairs, but it was there that night and it, along with her wallet, was taken.

Police said the suspect they captured had $25 in his pockets, the same amount that Tovar said was in her wallet.

Her husband was practicing soccer at the time of the robbery and not at home.

All of the stolen items were found in a neighbor’s yard. When police walked through the neighborhood, they spoke with a woman who told them the suspects knocked on her door about 30 minutes before the Tovar burglary. They asked if a person lived there and she told them no, and they left. Susan Tovar talks about how burglars came into her family’s home Wednesday night and took items including her purse, cash, a video game console and other belongings. The burglars tracked muddy footprints upstairs including in her daughter’s bedroom. She heard one of the suspects kick in the door and called 911. Shavonne Walker/Salisbury Post

The suspects tracked red mud all over the Tovars’ white carpet, causing about $2,000 in damage. There was $400 in damage to the back door.

Salisbury police charged Myron Sanders, 18, of the 6700 block of Long Branch Road, with first-degree burglary. He remains in the Rowan County jail under a $100,000 secured bond.

Police are looking for a second suspect.

“It definitely takes away your sense of security,” Susan Tovar said of the experience.

The Tovars say they have begun a plan to make their home safer, including adding exterior lights, allowing their dog indoors, and considering arming themselves with a handgun.

Susan said she will definitely be more aware of her surroundings. She believes she saw a car that might have been used by one of the suspects in the burglary just days earlier.

Tovar said she has told her neighbors about the screws in her door and advised them to switch out those in their homes.

“I just want people to know how to take precaution. It saved me and my children,” she said.

Anyone with information about the Tovar break-in is asked to contact the Salisbury Police Department at 704-638-5333 or Salisbury-Rowan Crime Stoppers at 866-639-5245.