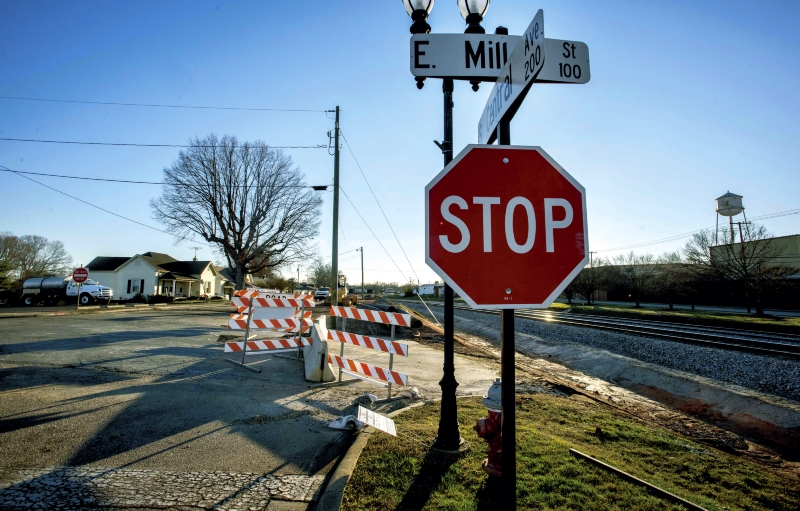 The former crossing at East Mill Street in Landis was closed to make way for the construction and expansion of the railroad tracks. Jon C. Lakey/Salisbury Post

LANDIS — The N.C. Department of Transportation is considering a redesign for a Landis intersection that residents say has become dangerous.

At Monday’s Board of Aldermen meeting, town officials and residents raised concerns about the intersection of West Ryder Avenue and Main Street, which was recently reworked during ongoing railway improvements by the DOT.

Town officials say there have been multiple accidents at the intersection since it was updated — including a pin-in and a car that turned onto the railway tracks. Tractor-trailers can no longer make the turn onto Main Street because of the addition of a median.

West Ryder Avenue is now the town’s only railroad crossing after the DOT permanently closed Mill Street in October.

“Between the two, they’ve just about destroyed downtown Landis,” Mayor Mike Mahaley said Monday of the railroad company and the DOT.

But DOT officials are giving the layout a second look.

“Their concerns have not fallen on deaf ears,” said Robert Broome, DOT director of communications.

Department officials in the highway and railway divisions are reviewing potential design changes for the West Ryder Avenue crossing and the Main Street intersection.

“We’re certainly not putting the blame on anyone,” Town Manager Reed Linn said. “That intersection is certainly a tight intersection, and there’s not a lot of room for anyone.”

Any changes to the area may have to be “creative,” Linn said.

Broome said DOT employees also are working with town officials on the possibility of opening a second railroad crossing. But Linn said he has not heard any suggestion of a second crossing, but he would welcome the discussion.

Broome said he is not sure if the DOT response is a result of Monday night’s meeting or earlier complaints.

Linn said that since Monday’s meeting, he and the aldermen have received several calls from the DOT and have arranged a few face-to-face meetings. Linn said the meetings would be the first the town and the department have had in several months.

“I think it will give us a chance to let the N.C. DOT hear our concerns,” Linn said.

Broome said the DOT currently has three projects in and around Landis. One is the railway improvement, which involves constructing about 11 miles of second track between Salisbury and Kannapolis as well as extending Kimball Road from Main Street to Chapel Street under a new railroad bridge.

The other local projects are a several-mile-long resurfacing of Main Street in Landis and China Grove and repairs and patches to Chapel Street. Resurfacing is expected to begin on a stretch of road between N.C. 152 in China Grove and Mount Moriah Church Road in the summer of 2017.

Residents also complained about the condition of Chapel Street, which has suffered damage from heavy equipment used during the railway improvements.

“Some of that is to be expected in a construction zone,” Broome said.

Repairs to Chapel Street are expected to begin in the spring. Since Monday, Linn said DOT officials have looked at the road and suggested shoulder work and storm-drain supports.

“We may get lucky and have some paving out there as well,” he said.

Broome said the DOT’s chief concern is completing all projects as safely and quickly as possible, but he assured residents that their concerns are being heard and taken into account.

Broome said work on the Landis section of the railway should wrap up this summer.