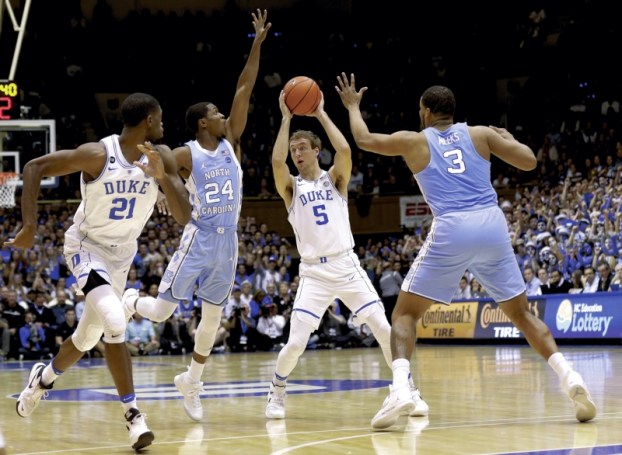 Duke's Luke Kennard (5) looks to pass as Amile Jefferson (21) looks for the ball while North Carolina's Kenny Williams (24) and Kennedy Meeks (3) defend during the first half of an NCAA college basketball game in Durham, N.C., Thursday, Feb. 9, 2017. (AP Photo/Gerry Broome) Duke’s Grayson Allen hangs from the rim after a dunk as North Carolina’s Kennedy Meeks (3) catches the ball during the second half of an NCAA college basketball game in Durham, N.C., Thursday, Feb. 9, 2017. Duke won 86-78. (AP Photo/Gerry Broome)

DURHAM (AP) — Grayson Allen scored seemingly at will. Freshman Jayson Tatum put on a second-half show wat the rim and on the boards.

And all of a sudden, No. 18 Duke looked more like the team that began the season as a national title favorite.

Allen scored 25 points, Tatum added all 19 of his in the second half and the Blue Devils beat No. 8 North Carolina 86-78 on Thursday night.

“We all grew up tonight,” Kennard said. “We were all together, we were all tough and very unselfish.”

The streak followed a stretch in which Duke looked uncharacteristically vulnerable, losing four of seven while dealing with the absences of key players — due to both injuries and a suspension — and Hall of Fame coach Mike Krzyzewski, who took a four-week leave for back surgery.

This renewal of one of college basketball’s fiercest rivalries lived up to its pedigree, with 17 lead changes, nine ties and neither team leading by more than eight points.

With former Duke greats Christian Laettner and J.J. Redick looking on from the crowd at Cameron Indoor Stadium, Allen hit the most important shot of the night — a 3-pointer over Jackson with about 1:15 left to put the Blue Devils up 80-75.

After Berry hit two free throws with 1:02 left to pull the Tar Heels within three, Duke played keep away and that set up an open 3-pointer for Tatum that bounced high off the back iron. Matt Jones beat Berry to the rebound and Frank Jackson then hit a free throw to put the Blue Devils up 81-77.

Berry raced down court and missed an up-and-under layup, and Tatum grabbed the rebound with about 20 seconds remaining to put Duke in control.

North Carolina: The Tar Heels, who entered as the nation’s second-best team on the offensive boards, couldn’t turn enough of their misses into second-chance points. North Carolina, which averages more than 16 offensive rebounds, matched a season low with seven while Duke chased down 24 of UNC’s misses. The Blue Devils outrebounded the Tar Heels 31-30.

Of course, it didn’t help that the Tar Heels played without starting forward Isaiah Hicks, the team’s No. 3 scorer and rebounder who strained a hamstring during practice Wednesday. Hicks said he went up for a dunk, landed on Berry and “kind of did a split.”

Duke: Suddenly, the Blue Devils have a marquee victory on their NCAA Tournament resume. Before this, their best win probably came over No. 17 Florida in New York in December, and this was their first victory over one of the ACC’s top-five teams.

Allen has led the way during Duke’s winning streak, scoring at least 19 points in all four games. This marked his third in a row with at least 20 points. “When Coach tells you to shoot the ball,” Allen said, “you shoot the ball.”

Tatum’s first basket was one he’ll never forget: With about 16 minutes left, he took the ball on the left wing and looked as if he was thinking about putting up a 3-pointer but reconsidered. Instead he drove the lane and threw down a one-handed dunk over big man Kennedy Meeks that put Duke up 53-46 and had Cameron rocking.

Duke has won five of six meetings with its fiercest rival. The Blue Devils denied North Carolina — which won here in the 2016 regular-season finale — its first consecutive victories at Cameron since the Tar Heels won four in a row from 2006-09.

North Carolina: The Tar Heels have the weekend off and visit another Triangle rival — North Carolina State — on Feb. 15.