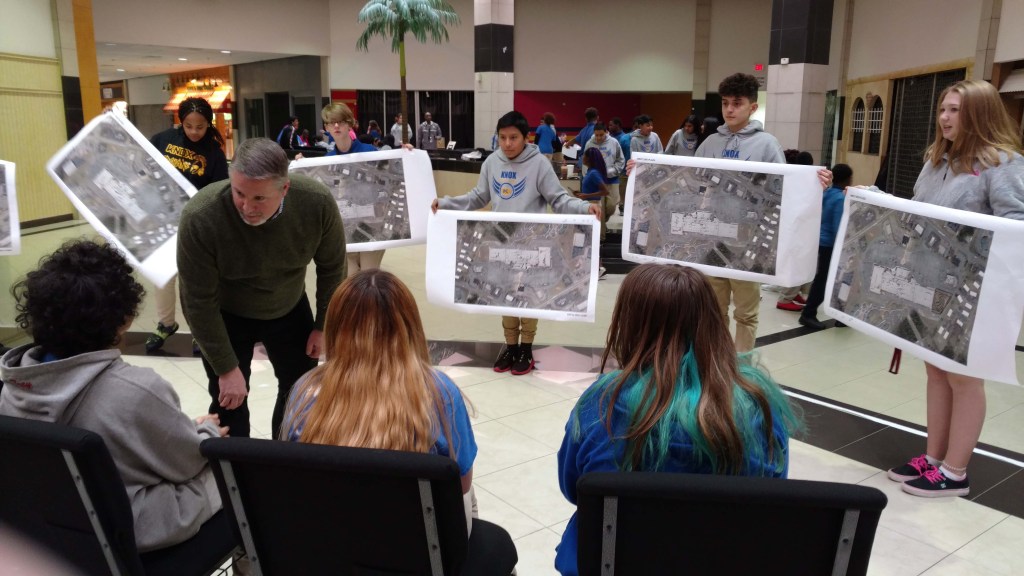 Knox students present their plans to a coucil of their peers. A Salisbury city employee talks to the group. Rebecca Rider/Salisbury Post

SALISBURY — There’s been a lot of discussion about the future of the former Salisbury Mall, now the West End Plaza. But while county officials debate what to do with the space, and which offices to shift to empty storefronts, seventh graders at Knox Middle imagined what might happen if they made the old building work for them.

As part of a problem-based learning experiment, seventh-grade math students from Knox are spending two weeks studying geometry, scaling, architecture and blueprints of the West End Plaza. And Friday, they took a tour.

The goal was for students to think of ways the West End Plaza could be used to benefit their peers and provide after-school opportunities to help keep teens out of trouble.

“For at least the next six years, you’re going to be in Rowan County,” teacher Darrin Turner told students as they walked around the interior, “You need to think about things you would like to see here.”

Turner pointed out that people in Rowan County drive to Concord, Charlotte or Winston-Salem to shop at specific stores or to visit certain places. He asked students to imagine what it would look like if those places came to Salisbury.

When students brainstormed, they came up with ideas like an after-school tutoring center, a workout area, a place for students to vent frustrations and a Wi-Fi-enabled area where students could work on homework, teacher Jamesha Thomas said.

But students were also hungry for a bit of fun. Arcades and skating rinks made the top of students’ suggestions as they toured the building last week.

Thomas said the she believed eighth grade Knox students came up with suggestions previously and sent them to County Commissioners, but were told that there needed to be more student-centric options.

According to Thomas, seventh graders did not take county plans for the space into account in their activity — they were only told that current renters and offices could not be moved from the building.

Friday the group also got a talk from Preston Mitchell, city planner for Salisbury, who walked students through sketching their plans out on an aerial map of the building, and holding a mock presentation before a council of peers.

Students will present their final plans at the district’s Problem Based Learning Showcase on Feb. 16 in the Wallace Educational Forum, 500 N. Main St. from 3 p.m. to 5 p.m.