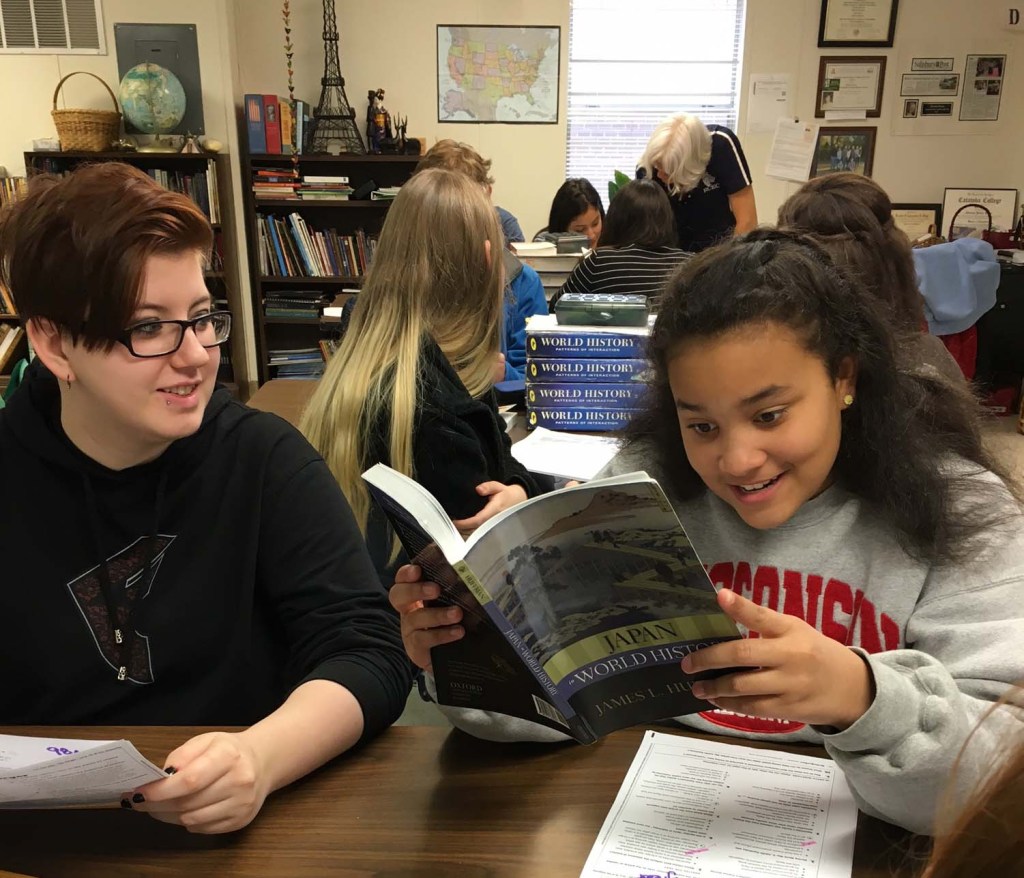 If I could go back to ninth grade, I would want to be a student at Rowan Early College.

Last summer I was fortunate to cross paths with the indefatigable Theresa Pierce; and what began as a simple request — “Would your history class be interested in creating a lobby display for St. Thomas Players’ production of the ‘Diary of Anne Frank?’” — has morphed into the “Stolen Voices” project, an interdisciplinary study of the effects of war on young people.
English teacher Kristin Walker has matched each ninth-grader with a chapter in “Stolen Voices: Young People’s War Diaries, From World War I to Iraq,” edited by Zlata Filipovic and Melanie Challenger. One challenge is to take the person’s final diary entry and create the one that follows.

Kiana Floyd volunteers to share what she did with 15-year-old Clara Schwartz of Poland, who hid in a bunker for two years during World War II. Unlike Anne Frank, Clara survived and immigrated to New Jersey.

Some of the students have gone so far as to age their entries with dirt or creases or burns for a more authentic product. Next, they will be reading “Night,” the Holocaust memoir by Elie Wiesel.
Math teacher Jeniffer Bain’s classes tie numbers to the words as students generate infographics, displays of the figures and facts of wartime for each country represented in “Stolen Voices.” In science, Charles Patton’s students examine stress — physical and mental — not only on people in war zones but also on their current selves.

“Right now your job is school,” Patton tells his students. “Your job is to be the best student you can be.”

The students discuss the pressure of this job, who and what inflicts it, how it can be good or bad and effective ways to handle the stress of being a successful student.
This discussion spills over into Theresa Pierce’s history class, where the lesson segues from Nazi Germany to Japanese internment camps.

“What’s the first thing Hitler did to the people he imprisoned?” Pierce asks.

“Break down their morality and dignity,” she answers.

Rorie shares with me the stolen voice she’s been matched with — Hans Stauder, a German solider during World War II. His journal is more of a “timeline, a reporting of ‘facts rather than feelings,’” though Rorie in her follow-up entry depicts Hans running his hand over his hair “slick with the blood of soldiers killed near me.”

It’s easy to see why Kobe Partlow, 14, is a huge Pierce fan. He is also the one matched with Anne Frank herself. When I ask him what surprises him most about Anne’s diary, he doesn’t hesitate: “How she used her imagination to keep herself sane.”

In April, all of the ninth-graders will visit the Holocaust Memorial Museum, for which the Stolen Voices project lays the groundwork. Invigorated by her students’ efforts, Pierce has uploaded the project to an on-line database so that teachers nationwide can access the lesson plans.

The ninth-graders, their parents, and their teachers will be the honored guests of St. Thomas Players and Lee Street theatre at the Feb. 21 dress rehearsal of the “Diary of Anne Frank.” A compilation of the Stolen Voices project will be on display in the lobby of Lee Street theatre through the run of the show (Feb. 23 to March 5).