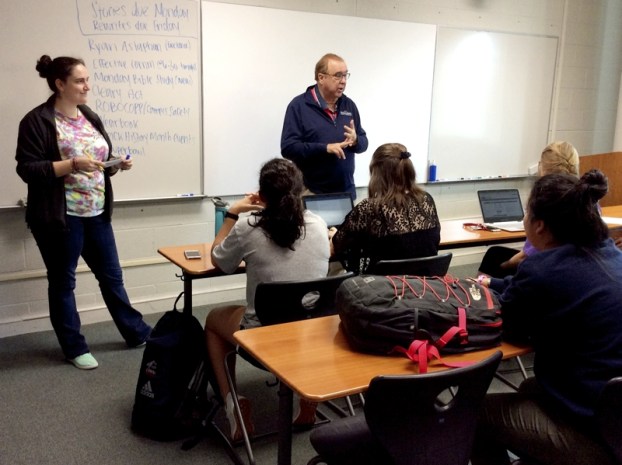 As the spring semester moves into full swing at Catawba College, students in the applied journalism class are hard at work on the school’s second print newspaper in nearly a decade.

The Pioneer, as the paper is called, is an open forum for the exchange of news, information and ideas about life on and around the campus and in the community at large.

The paper is produced, edited, and published by students for one credit hour per semester and previously functioned more as a club than a traditional classroom experience.

Under the leadership of Professor Cyndi Wittum, the recently digital-only college news service was designed to prepare students for the real-world applications of modern journalism. The site was updated weekly with the goal of keeping information current.

“In the real world, one of the key aspects of news is its timeliness,” says Hannah Davis, a senior majoring in communications and the editor of The Pioneer. “In the information age, we want our news now.”

The course would undergo dramatic changes. Shortly before homecoming in the fall of 2016, the college published its first print edition of The Pioneer since its decision to become digital-only in 2009. This shift came as Professor Mike Hogewood received charge of the class.

Hogewood is a seasoned professional in the journalism and broadcasting world. Many will recognize him as play-by-play announcer for local and national sports. However, his heart is with the written word.

“I consider my main strength as a journalist to be my strength as a writer,” he says. “Writing for media is a passion of mine, and I found that it was a passion for these students. … [T]hey were eager to have a published edition.”

He chose to pursue print in light of findings that college newspapers with print editions were much more popular than their digital-only counterparts. He notes that Jay Abraham, dean of Catawba’s Ketner School of Business (KSOB), supported this decision and process.

Abraham had the following to say about the paper:

“Media is a multi-faceted vehicle and, as such, it is important to promote the college across all forms of media; digital, social, radio, print and broadcast. The printed version of The Pioneer is a great way to increase the reach of the wonderful articles and information our student journalists create. We have tactically picked certain times of the year to print the paper so we can promote the school to parents, alumni and their friends and families, where the digital version alone would probably not reach those audiences. This is all part of a broader agenda to increase the exposure of Catawba College to a broader audience.”

For students, this exposure was quite rewarding.

“As an e-edition-only news source,” Davis says, “we appeared to barely exist on campus. In fact, after the print edition came out there were several faculty and staff, even in the (School of Business), who had no idea we were still ‘a thing.’”

However, the switch back into print was not without difficulty or hesitation. In October, Catawba was featured in “The Princeton Review’s Guide to 361 Green Colleges: 2016 Edition” with a 92 rating on a scale of 60-99. For the school’s many environmental majors and minors, the need to return to print was disheartening. Davis happens to be one of these people.

“As an environmental minor, I hate that we have taken this turn back into print news just because people did not know we existed.”

“The primary thing in journalism is to make your stories accurate,” he says. “We now have systems in place with our editors to really check and double check and make sure that our stories are all accurate.  [W]e could have been better and we will be better leaning forward. It’s always a learning experience. We learned so much producing that first edition that I can’t wait for the next one.”

Davis says that the rebirth of the print edition was rough, but the end results have proved positive.

“I am very proud of the students who stuck through the class and its rocky transition and to those who supported me. I am also extremely grateful for the opportunities this print edition has opened up for (The Pioneer). Several faculty and staff have now come to us, asking how they can help or how they can keep this going.”

These willing volunteers will be getting their wish to see the paper continue. For now, this semester’s staff of 18 student reporters continues to work towards the paper’s spring edition — due to be published before spring break. They will then move on to compiling the school’s welcome back edition, available the first week of fall semester.

Hogewood has hopes of a twice-a-semester publication in the future. His students mirror his hope and enthusiasm for the medium.

“Since I have had a lot of classes on this subject, I am inclined to say that print media is dying,” Davis says. “However, I know that it does still hold a place in the hearts of many people and it is not just a generational thing . … As a nostalgic, I don’t think print media is going anywhere because it has such a rich history with our world and our culture, and I am genuinely happy about it sticking around.”

Catawba student Andie Foley is an intern at the Salisbury Post.

By Rebecca Rider rebecca.rider@salisburypost.com SALISBURY — There’s been a lot of discussion about the future of the former Salisbury Mall,... read more