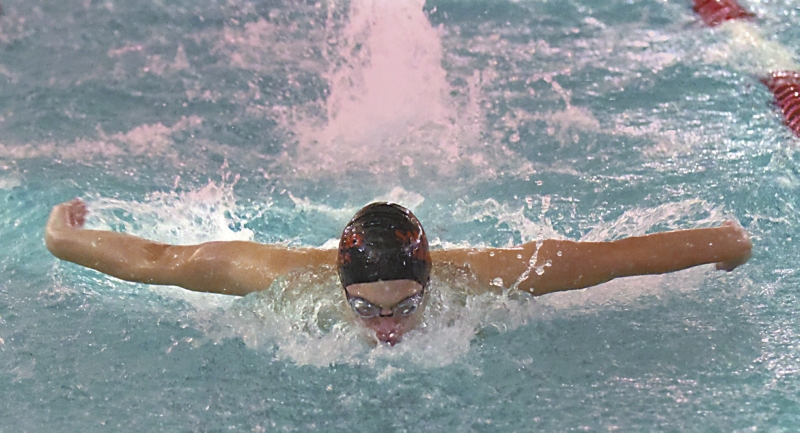 Morrison, a junior, just missed on a second state title at the Triangle Aquatic Center in Cary.

“We were about three/tenths of a second away from getting four state championships,” Salisbury girls coach Sallie Pittman said. “Kathryn was neck-and-neck all the way with two girls in the 100 butterfly.”

Morrison had the swiftest time in the preliminaries but finished third in the 100 butterfly final in 55.73 seconds. Lincoln Charter swimmers placed 1-2 in the event.

“I was proud of a lot of things that happened today but what I was proudest of was Kathryn showing a lot of class and coming back from being very disappointed in the butterfly to win the 100 backstroke,” Pittman said.

Morrison took the 100 backstroke in 55.26, winning by more than two seconds. She didn’t leave any doubt.

Morrison will receive All-America consideration for the backstroke and the butterfly.

As a sophomore, Morrison placed second in the 1A/2A Championships in both events.

Salisbury’s girls placed ninth in the 200 medley relay and picked up 18 points in that event. That relay team consists of Morrison, seniors Sharmi Amin and Callie Alexander and junior Mary Kaufmann.

Morrison accumulated 36 points for her first and third places, so the Hornets totaled 54 points. That was good for 13th place. Pine Lake Prep won with 332 points.

“Take away all those schools with Charters and Preps in their name, and we were top five,” Pittman said.

Like Morrison, Knorr is junior and a two-time Rowan County Swimmer of the Year, and like Morrison, he put the finishing touches on his third straight award on Thursday.

Knorr won the 500 freestyle in 4:33.98. That was almost 10 seconds faster than his seed time and broke the state record for 1A/2A swimmers.

“He actually beat the kid (First Flight’s Hunter Crook) that won the event and set the record last year,” Pittman said. “So it was a little bit of revenge for him.”

Knorr will receive All-America consideration for that time.

Knorr also ruled the 200 Individual Medley. There were no records set, but he won by more than four seconds in 1:53.83.

Knorr is making major strides. As a sophomore, he was eighth in the 200 IM and third in the 500.

Salisbury also was stout in the 400 free relay, where Knorr completes along with juniors Joe Steinman and Keegan Dillon and sophomore Roarke Burton.  The Hornets took third place in 3:25.68, about eight seconds behind the winning Washington team. Relay points count double, and the Hornets got 32 points for that finish to go along with the 40 for Knorr’s two individual wins.

“Keegan Dillon and Joe Steinman had the fastest swims they’ve ever had in that relay,” Pittman said.

The same Salisbury foursome swam 1:46.34 for seventh place and 24 points in the 200 medley relay.

“It was a good day for Salisbury swimming,” Pittman said. “We don’t have big teams, so we’re just really proud of what these kids were able to accomplish.”